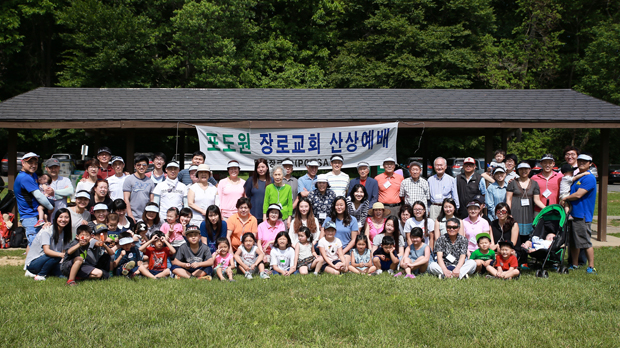 Podowon. This is the Korean word for vineyard, and it is the name of our church. Our story begins with Pastor Taeui Park and a small gathering of families who started holding worship services and bible studies in various homes and locations. This momentum continued to build and soon the beginnings of Podowon Presbyterian Church began to take root with its first formal inaugural worship service held at the Holy Trinity-Bethlehem Presbyterian Church on 11th street in Philadelphia, PA.

Through continued perseverance and prayer, we were able to establish officially as a church with Pastor Jin Jae Song serving as the Lead Pastor of Podowon in 1986. Then on October 7, 2001, Podowon Church was able to relocate to the Presbyterian Church of the Covenant on 50 Montgomery Ave in Bala Cynwyd, PA, and began to flourish to 150 active members. With this new space and increased membership we began creating a new Men’s and Women’s Ministry, Sunday School, Youth Ministry, and in particular an English Ministry that was lead by Pastor Song’s son, Jihoon Song. Through these new established ministries Podowon experienced tremendous spiritual growth and unity as one body in Christ.

However, Podowon soon found itself face-to-face with one of the many of the issues that occur with most immigrant churches today: financial burden. Due to financial strains Podowon Church had to relocate.  In 2008 Podowon was able to find another church to call home and relocated to Collenbrook United Church in Drexel Hill, PA where it is today. However due the church relocation membership began to decline significantly.

On April 6, 2008, Podowon Presbyterian Church relocated to Collenbrook United Church (5290 Township Line Road, Drexel Hill, PA 19026) with less than half of its congregation. Despite difficulties, Pastor Song and the remaining congregation were able to persevere through prayer and begun to reform its ministry. Podowon decided that it should focus on cell group ministry, discipleship training, and leadership training, and soon it began to see stronger leaders in the church as well as see spiritual growth and healing. Podowon was also able to build its relationship with Collenbrook United Church during this period as well, where in April 1, 2010, marked its first joint worship service on Maundy Thursday.

After almost 30 years of shepherding and tending to Podowon Church, Pastor Song announced his retirement at the beginning of 2013, and left Podowon Church in the capable hands of Pastor Byungil Kim on May 5, 2013.

With Pastor Kim, Podowon continued with its cell group ministry but with renewed focus on leadership training to develop stronger spiritual leaders within the church. In addition there has been stronger focus on evangelism—both at local and global levels. In 2014 Podowon has donated close to $2000 to the homeless and has donated food, goods, and clothing for the 69th Street Homeless Center in 2015 and 2016. Podowon also continues to send some financial assistance and prayers letters to those in the mission field in Georgia (Eastern Europe) and overseas. More recently Podowon has started to focus a lot more energies towards its Sunday School and Youth Ministry, and has reestablished a small EM group.