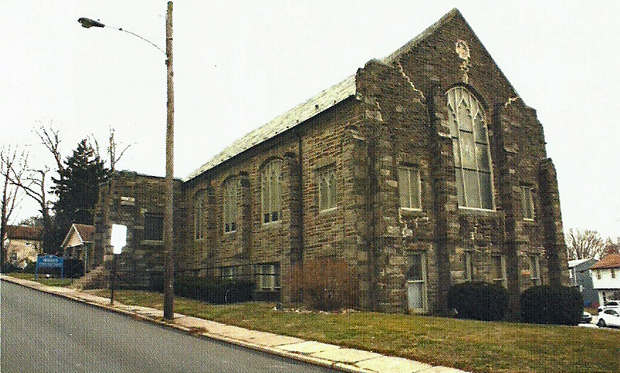 On May 21, 1923 the Philadelphia North Presbytery organized the Roslyn Chapel of the Carmel Church of Glenside as the Roslyn Presbyterian Church, at Easton Road and Tyson Avenue.  The new church got off to a good start, and by 1930 had grown to 251 members, with 360 in the Sunday school. Then in  1936, the pastor, part of the session and a large number of the members sympathetic to the fundamentalist side in the theological controversy in the PCUSA at that time, left the church and started a new independent church nearby. Only one elder and five trustees remained loyal to the denomination. The Presbytery's National Missions Committee took the remaining members under its care, arranged for Princeton Seminary students to supply the pulpit, and negotiated new terms for the reduction of the church's indebtedness. The committee reported in 1937 that "the progress of the work has been most encouraging. The congregation is most loyal and very hopeful as to the future of the church."

Roslyn rebounded from this division and took advantage of the further growth of the community after World War II. By 1960 membership rose to 415, and the Sunday school reported 412 on its roll. Then a combination of internal problems and the movement of Roman Catholics into the area in large numbers brought membership down to 291 in 1970. That year the church school reported only half its 1960 enrollment. Another division arose in the church in 1979, when the pastor secretly accepted membership in the Presbyterian Church in America, and sought to take the church over to that denomination. The Presbytery discovered the plan before it took effect, and removed the pastor. Some members left with him to organize another congregation in the area. Again the Presbytery worked with the remaining officers and members in securing strong leadership for the church.

Membership remained stable between 1980 and 1990, but the 166 members reported in 1990 reflected the loss suffered in the 1979 division. The Roslyn Presbyterian Church continued its path, caring for the members and the community. What once was called “The Little Church on the Hill” became known as the “Little Church with the Big Heart.” Despite a slowly dwindling congregation due to aging and other forms of attrition, the loyal members always welcomed newcomers and visitors with warmth and hospitality. They gathered food for the local food cupboards goods for “Cradle of Hope” (a home for mothers and babies in need), and a blanket drive for the homeless. They gave with such great generosity that the benefactors were astonished!

Since 1990, it became more difficult to get younger families to come to church and the congregation continued to diminish. Some families drifted from Roslyn to attend other churches that had active youth programs. To stave off financial difficulties the church building was sold to a pre-school in 2015, with the church renting the sanctuary space and an office for the pastor.  Finally, in early 2017, the congregation (of about 13 loyal parishioners) decided to disband, and the last Service of Worship was held on September 3, 2017.