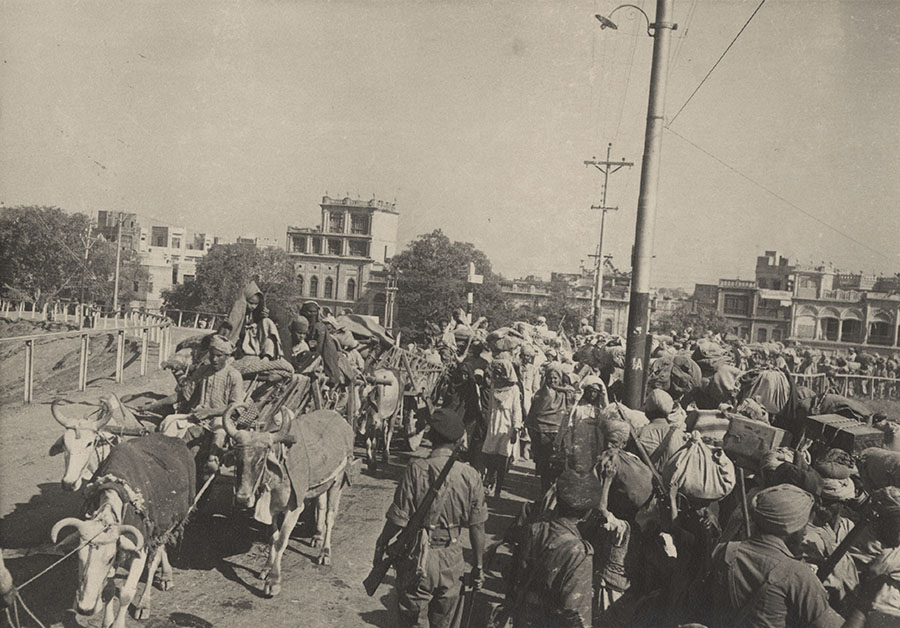 An endless stream of people passing across railway bridge in Ludhiana in December, 1947. "Teams to the right, walkers to the left," ordered the soldiers, seen in foreground with rifles. All photographs from accession number 14-1118, George B. Leeder papers.

George B. Leeder, a Pennsylvania Presbyterian with a B.S. from Lafayette College, was sent in 1926 to the Punjab to run schools performing what was then known as rural rehabilitation -- training village farmers and smallholders in modern Western agricultural methods. He rode in a station wagon called "Big Ernestine," and he brought his camera. In 1947 and 1948, Leeder and his camera saw famine and violence engulf the new states of India and Pakistan.

One year earlier, the chief North American interdenominational Christian aid organization, the Foreign Missions Conference of North America, (FMC) had been apprised of the threat of famine in India by Henry Smith Leiper of the American Famine Mission. Recently returned from India, on September 25, 1946, Leiper reported to the India Committee of the FMC that India's surging population continued to outpace its food supply, and that 160 million people were subject to rationing. "Daily provisions," said Leiper, were "close to the minimum and serious malnutrition with all its after-effects was already evident."[1] Leiper and John Reisner, of the Rural Missions Cooperating Committee, appealed to the group to support long-term rural rehabilitation to end the Indian subcontinent's cycles of famine.

Stateside, a mood of hope prevailed in advance of India's independence. B. L. Rallia Ram, director of the Young Men's Christian Association of Lahore, addressed the FMC on May 14, 1947, crediting Christian missionaries with planting the seed of Indian independence through schooling: "The coming of education was the beginning of nationalism. India began to think in terms of Western democracy." According to Ram, the constant frustration of the people had shifted to eager anticipation, and Western Christians had to "be willing to do revolutionary things or the cause of India will be a lost cause."[2]

In a May 20, 1947, letter home, George Leeder reflected that India, which had largely been spared the horror of the Second World War, was bringing that horror upon itself. Rival bands of "goondas (lawless ones)," Hindu, Sikh, Christian, and Muslim, had been goading one another toward violence -- one nearby group looted a jeweler's stall and sent women's bracelets to its rival, calling them in Leeder's terms "panty-waists." "There will be continuous disorder, or worse," Leeder told his son Stew: "We have met some of those who passed through the days and nights of fighting and fire and plunder in Amritsar and Rawalpindi [...] Some have lost relatives by burning or stabbing. [...] All are afraid lest a holocaust break out to engulf them in their particular neighborhood. And all indulge in the wildest tales setting up the righteousness and virtues of their particular community over against their 'enemy' community."[3]

A young buffalo serves as transport for bedding rolls, mother, and sick son, as the older one brings up the rear. Ludhiana, 1947.

Following a year of intercommunitarian bloodshed, the British imperial government created a Muslim homeland, the Dominion of Pakistan, on August 14, 1947. The remaining Union of India was formally organized the next day. In the next three months, Muslims fled to East and West Pakistan, and Hindus, Sikhs and Christians fled to India, some 14 million people in all. Hunger and disease followed the displacement. George Leeder stayed close to his post at United Christian Schools in Jalandhar in late August, "rather more of a glorified watchman than anything else," watching convoys bringing Muslim families across the new border with Pakistan, returning empty, Hindus and Sikhs doing the same. Leeder was baffled: "There isn't enough trust for each to haul the other's people thus making full use of the limited transportation!"

Camp, Lyallpur Road, after storm, 1947. Graves in distance on right.

On September 5, at the American Presbyterian mission at Ludhiana, Leeder took three Muslim employees of the mission and their families to a government-run relocation camp. One, Abdul Aziz, had worked with Leeder for twenty years. He paid Abdul the month's salary he was owed, and then, as Leeder wrote his son Stew, "[...] so we wouldn't have others to see our real feelings, outside we embraced, Punjabi fashion -- and that brought the tears to each of our eyes. [...] I pictured him carrying you on his shoulder up in Murree. How he had more than anyone else taught you and Ann to talk correct Urdu." After finishing his letter, and his tea, George went with staff of the Christian Medical College to round up supplies for the refugee camps, chiefly using materials from Muslim doctors who had already fled.

At a September 24, 1947, meeting at the United States State Department, representatives of the Catholic Welfare Conference, the American Friends Service Committee, the Red Cross, and the Church World Service (CWS) issued an appeal for doctors and nurses trained in public health to volunteer for work in refugee relief in India. CWS authorized immediate expenditure of $108,000 for famine relief the next day.[4] George Leeder spent the entirety of September and October traveling Punjab, locating supplies of antiseptics, medicines, and food rations, and bringing them back to Ludhiana and Jalandhar. On September 25 and 26, nearly continuous rain stopped traffic along the Grand Trunk Road: "Hundreds of thousands of people were sitting in this downpour out in the open, huddled in groups, with not a dry stitch on them, nor a dry spot to sit [...] One 16 yr old girl was carrying an old man, who could not walk, and who was heavier than she. No cartman offered to put him on his cart. Each attended to his or her own little misery."[5]

By mid-October, representatives of the Church World Service had arrived in Ludhiana, and all American missions began channeling their relief efforts through CWS. Following the trail of refugees from Jalandhar to Amritsar and across the new border to Lahore in West Pakistan, CWS distributed reconstituted milk for children at wayside milk bars. In late October, Leeder learned that Abdul had journeyed safely to Lahore and was working at Forman College. Others from the evacuation camps did not survive: "117,000 were moved from about Jagraon last week, only having had 32 die on the march to Ferozepore. (They had at least 22 births en route.)"[6]

Partition altered the course of ordinary life for the missionaries. On Thanksgiving Day, 1947, with commencement at UCS completed, George and Libbie Leeder traveled to Saharanpur to have dinner with two other missionary couples, the Formans and Pedersens. The Leeders persuaded a Christian cook named Hussain Shah to return to Jullundur with them, and they left the next morning. At a checkpoint between Saharanpur and Ambala, in Leeder's account Sikh military police singled out Hussain: "'What's his name?' Before I was able to reply, he said, 'David.' 'Oh, a Hindu,' said the police. I said, 'No, a Christian.' And with that we were allowed to go through."[7]

Leeder continued to support CWS relief efforts through the winter of 1948, and served as principal at UCS Jalandhar until his retirement in 1967. We recently received a small collection of correspondence and a large body of slides and photographs from Leeder's work in North India, a living portion of one Presbyterian's service amid extremity.