How Christmas Came Back to Leeds 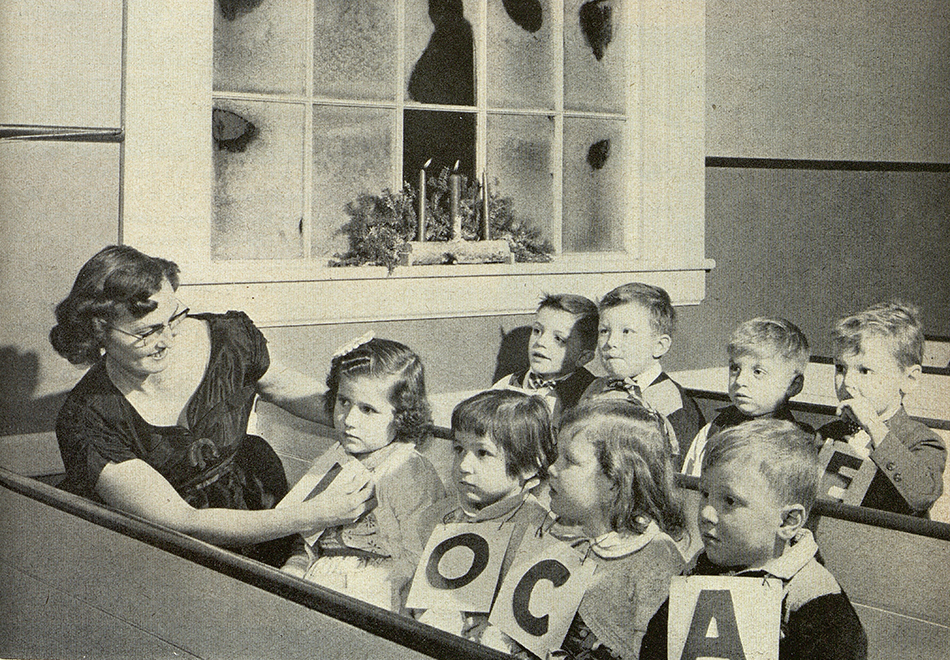 In 1951, going to church on Christmas was a forgotten ritual in many of the small, rural communities of Central Maine. Churches built a century before remained abandoned after residents moved south during World War II, seeking jobs in the industrialized towns of New England. In Leeds, the Baptist and Universalist churches, built 200 feet apart on adjoining lots, stood empty—a reminder of the religious rift that had driven the community apart years before. But a group of 100 concerned Leeds residents were determined to bring their community back together, this time within the walls of a Presbyterian church.

In 1951, the group petitioned the Interdenominational Commission of Maine to provide assistance in organizing a church. Maine already had a decade-long relationship with the Presbyterian Church in the U.S.A. In 1941, the General Assembly established a War Services Unit of the Board of National Missions to minister to the massive numbers of Americans in “War Industry Communities” who had left their homes and churches to find work in the newly created industrial defense areas. BNM field workers established Sunday schools, built churches, and organized parishes. By 1950, the unit had shifted focus towards helping the population readjust to peacetime conditions, and its projects had been absorbed into various permanent departments of the BNM.

At the request of the Maine Council of Churches, the PCUSA War Services Unit was given responsibility for the Elizabeth Park Housing Project, a war industrial area located in Cape Elizabeth, south of Portland, Maine. This Christmas party held for children at the Elizabeth Park Community House (December 1947) was part of the work being conducted there. [Image no. 3943 -- This image is a colorized version of the original version found in the society's collection.]

While the War Services Unit ministered to those in newly formed industrialized towns, the Department of Sunday School Missions was one of the permanent departments of the BNM that focused its efforts on those who were left behind in rural areas. During the war, the department was simultaneously working in areas such as Starks, West Mills, and North Anson, conducting vacation bible schools and organizing worship services.

Carl H. Geores (1922-2008) was still a senior at Princeton Theological Seminary when J. Earl Jackman, Director of the Department of Sunday School Missions, asked him to answer Leeds’ call for a pastor. In 1952, less than a month after graduating, Reverend Geores and his young family arrived in a town they’d never heard of. In his memoir, The Journey of Faith, Geores recalls walking with his wife, Melva, to Meeting House Hill where the abandoned Baptist and Universalist churches stood: “The hay in the yard was three feet high. The steeple area in the old Baptist church leaked like a sieve. The plaster in the Universalist church was cracked and broken. A new roof was needed….There was no congregation.” And despite the majority's desire for a pastor, several townspeople reacted with skepticism upon the Geores' arrival. Rev. Geores remembers a teacher in Leeds saying: “So, this is the man who is going to start a church in Leeds?—no man can!”

Worship services first began in the old Universalist church. There were no lights in the sanctuary; the old reed organ hissed as air escaped from the cracked bellows; the furniture was old and rickety; and the communion sets were borrowed. But the congregation persevered. Though it was by stove-heat and candlelight, Leeds had a Christmas service once again.

Less than a year later, in January 1953, the deed to the Universalist church was sold to the new Presbyterian congregation for one dollar, and the Leeds Community Church was organized by the Presbytery of Newburyport. Rev. Geores saw the community in Leeds coming together in unprecedented ways. Gifts and labor were donated to renovate the old church buildings, install heating systems and bathrooms, and convert the old Baptist church into a neighboring Christian education building and youth center. In 1954, Leeds became the charter member church of the Mission at the Eastward (MATE), an interdenominational ministry project organized by the Board of National Missions, in partnership with Methodist churches, to support the organization of congregations in the small, rural communities of West Central Maine. Rev. Geores became MATE’s Associate Director and Coordinator of Development and later helped organize the Rural Community Action Ministry, another interdenominational organization devoted to eradicating rural homelessness and hunger.

Reverend William Burger, a Presbyterian minister, worked alongside Carl Geores for the Mission at the Eastward. Here, Rev. Burger carries his ministry from the Richard Bell Chapel to the nearby ski slopes at Sugarloaf, Carrabassett Valley, Maine. Photograph by Carl Karsch, ca. 1960. [Image no. 4570]

A few years after arriving in Leeds, Geores extended his mission work to serve congregations in the nearby communities of Wales and Hartford. By the time Presbyterian Life published an article in 1956 covering Geores’ work in Maine, the Christmas service at Leeds was drawing crowds of 200 people despite frigid temperatures. “One by one,” Carl Geores said, “the lights [were] being turned on in the churches” of Maine.

Interested in reading more about the work of Sunday school ministers? Check out our new online exhibit Sacred Spaces and read more blog posts on the theme here.