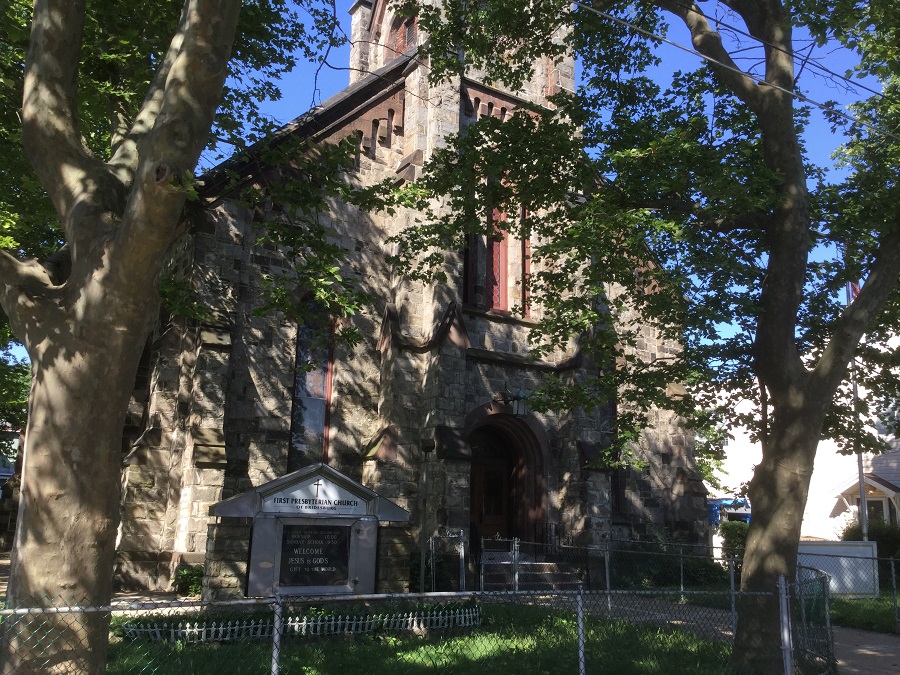 The first thought of forming a church in Bridesburg came out of a meeting in September, 1829. Henry Parkes and the Rev. Dr. Biggs of Frankford Presbyterian Church took the stagecoach to Bridesburg Village to meet with 21 faithful members of the community. This 1 ½ mile area was often impassable for pedestrians and carriages making it a hardship for people to attend Frankford Presbyterian Church. The members of this group wanted to establish a local house of worship to preach the gospel.

And so it was that in September 1829, a Sunday School was organized. Alfred Jenks, a prominent textile businessman, opened his home on Saturday evenings and Dr. Biggs came by stagecoach to teach the men and women of Bridesburg. As industry grew in Bridesburg, more and more people moved to the area and the need for a permanent house of worship was discussed. Alfred Jenks then offered a plot of ground for the building of a Presbyterian Church. The following resolution was adopted “Resolved: that by the help of God, we will build a house for His worship and will take immediate measures and prosecute them with vigor to accomplish our present undertaking.”

Over the years plans were established, money was collected and building began. On December 10, 1837 the building was dedicated and a committee was formed to call a pastor. The first pastor, Rev John Mason, was installed on July 18, 1838. The second pastor Rev B. F. Stead was installed on February 22, 1842 and during his time at the church 122 new members were added to the role.

In 1853 plans were made to build a Sunday School behind the sanctuary and construction was completed in 1854. During that year, Alfred Jenks (a noble, devoted Christian and staunch supporter of the church) died and the church and Sunday School were draped in mourning for 30 days. His family did much to continue the ministry in Bridesburg and son Barton Jenks had a new sanctuary constructed in 1867. The church was constructed of stone with large stained glass windows and a high steeple. It was designed after a church in Italy. The cost of the building was $35,000 and Barton Jenks paid for most of it.

Bridesburg Presbyterian continued to grow in the late 1800s and early 1900s despite the predominantly Polish Roman Catholic population. Missions were established to reach this group but were unsuccessful. At one point there were 400-450 members and over 550 in the Sunday School. After World War II the membership dropped dramatically. However, that did not stop the church in its outreach programs.

The most famous program was onset of Trick or Treat for UNICEF. The Rev Clyde Allison was installed on June 17, 1952 and first on his agenda was to have the boys and girls dress up for Halloween and go door to door to collect money in glass mason jars for poor children in other countries. Their costumes had to represent those worn in other countries (nothing scary like the typical Halloween costume of today). The Reverend Allison was honored by UNICEF at a banquet in New York City in 1997 along with one of the first participants in Trick or Treat for UNICEF. This tradition of collecting for UNICEF by the Sunday School children has continued for 65 years.

Bridesburg has had its ups and downs over the last 25 years but the congregants remained faithful. The Sunday School class of 25 members in 2009 dwindled down each year and as of May, 2016 there were no more children attending. However, various programs still continued including Lunch with Easter Bunny, an Easter Egg Hunt, Breakfast with Santa and Summer Kids Night Out programs. We keep “quiet toys” in the back of the church for little children who come with their parents.

As time has gone on our members have died, moved away or have not attended worship services for various reasons. The past two years have been a struggle for us to stay open and provide the community with the services that it needs. We have tried to keep our hearts and minds open to God’s plan for the Bridesburg Church and the answer, unfortunately, was to close the doors. Our last worship service will be October 15, 2017 and we want it to be a celebration of the saints who came before us to bring the Word of God to the people in the Village of Bridesburg. This village did not become a part of Philadelphia until some years after the organization of the church. Now it is a neighborhood and we are sure that this neighborhood will miss us. We held banquets, dinners, plays, concerts and children’s entertainment. Various groups used our Sunday School for scouts, recovery help, parties, etc. It is our prayer that another church will see fit to use our property to continue ministry. “To God Be the Glory”