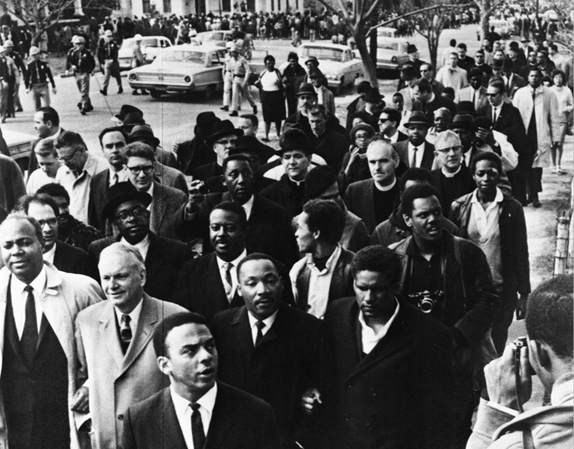 Fifty years ago this March, Americans witnessed a rapid and tumultuous turning point in the Civil Rights movement. After the “Bloody Sunday” attacks on African-American marchers in Selma, religious leaders from across the country called on their followers to support the non-violent protests for equal voting rights in the South. Presbyterians joined many others in heeding that call.

A focus on voting rights in Alabama was not new. Frustrated by the continued use of intimidation, poll taxes, and literacy tests to prevent blacks from registering to vote, African-American activists in Selma had joined with the Student Non-Violent Coordinating Committee (SNCC) in 1963 to start a voter registration project in Dallas County. Over the next year, white officials responded by turning away hundreds of African Americans attempting to register. In July 1964, a judge issued an injunction making it illegal for more than two people to talk about civil rights or voter registration in Selma.

In early 1965, Martin Luther King, Jr. and the Southern Christian Leadership Conference (SCLC) accepted the invitation of local activists to come to Selma, focusing national attention on the voting rights struggle. Over the next two months tensions rose as speeches, peaceful demonstrations, and attempts to register voters were met with thousands of arrests and new injunctions. On February 18, Alabama state troopers attacked civil rights marchers in Marion, Alabama, shooting black protester Jimmie Lee Jackson in a coffee shop while he tried to protect his mother. Jackson died from his wounds a week later.

Jackson’s death spurred the SCLC to call for a march from Selma to Montgomery, Alabama’s capital, to champion full voting rights. On March 7, 1965, over 500 people, primarily African Americans, were turned back at Selma’s Edmund Pettus Bridge by state troopers and local deputies using nightsticks and tear gas. Images and news reports of the Bloody Sunday confrontation spread throughout the country, galvanizing support for further peaceful protests.

King led calls for the hastily organized “ministers march” on Tuesday, March 9. In a March 8 telegram sent to national religious leaders, including Edler Hawkins, Moderator of the United Presbyterian Church in the U.S.A. (UPCUSA), he made his case for widespread support:

In the vicious maltreatment of defenseless citizens of Selma, where old women and young children were gassed and clubbed at random, we have witnessed an eruption of the disease of racism which seeks to destroy all of America. No American is without responsibility. All are involved in the sorrow that rises from Selma to contaminate every crevice of our national life. The people of Selma will struggle on for the soul of the nation, but it is fitting that all Americans help to bear the burden. I call therefore, on clergy of all faiths, representative of every part of the country, to join me in Selma for a ministers march….In this way all America will testify to the fact that the struggle in Selma is for the survival of democracy everywhere in our land.

Ensuing vigils and demonstrations across the country connected many Americans to the Selma cause. On March 15, President Lyndon Johnson gave a live television address before a joint session of Congress on the proposed Voting Rights Act, calling Selma "a turning point in man's unending search for freedom.” Backed by the president’s commitment of federal support, Judge Johnson lifted his restraining order on March 17 and ruled that the First Amendment rights to march in protest could not be abridged by the State of Alabama.

This tidal wave of support buoyed preparations for the third Selma-to-Montgomery march. The UPCUSA’s Commission on Religion and Race urged Presbyterians “to stand with Negroes in Selma who are seeking their right to vote, free assembly, and of protest.” Head of the Board of National Missions Kenneth Neigh led a national staff contingent down from New York, and synod and presbytery staff and pastors from around the country also traveled to Selma. From San Francisco Theological Seminary, President Theodore Gill, faculty members, and over 50 seminary students boarded a bus for the long drive to Alabama. Many of the students helped set up tents and dig latrines, and they served as guards and lookouts during the five-day march.

On Sunday March 21, two weeks after Bloody Sunday, almost 8,000 people, black and white, set out from Selma, led by King and other religious leaders. As the procession approached Montgomery on Thursday, the number of marchers swelled to nearly 25,000. From the steps of the capitol, King spoke about the hard-won victory: “Selma, Alabama, became a shining moment in the conscience of man. If the worst in American life lurked in its dark street, the best of American instincts arose passionately from across the nation to overcome it.”

In its April 15 issue, Presbyterian Life posed the question, “After Montgomery, what?” Noting that violence and reprisals had already occurred, the editors nevertheless concluded that real change was possible. “[E]qual rights everywhere for everyone seem now graspable, and a great many people have recently not only jumped off the fence—they have jumped over the fence. Their newness and vigor adds significantly to the numbers of the already committed.”

The Voting Rights Act became law on August 6, 1965, prohibiting racial discrimination in voting throughout the nation. Enforcement of the law came slowly to Alabama and other parts of the South, but continued activism and a gradual acquiescence to federal mandates led to a huge increase in the number of blacks registered to vote by the early 1970s. In the end, the words and presence of religious leaders and many faithful Americans helped right an injustice and bring the nation closer to true democracy.