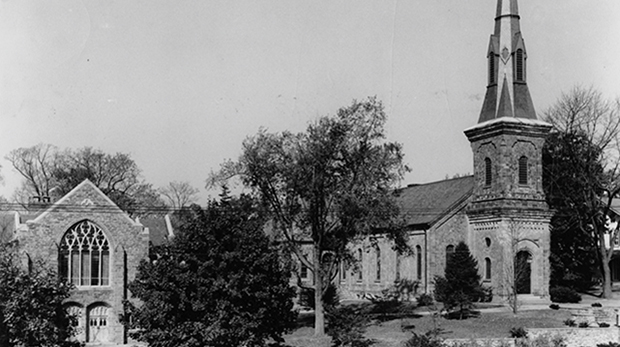 Malachi Jones organized the Abington Presbyterian Church in 1714, and later that same year The Presbytery received him into its membership.  Jones purchased a tract of land on Old York Road below Susquehanna Road and in 1719 sold to the church one-half acre of ground upon which to build a church and establish a burial ground.  In 1793 a new church was built on the west side of Old York Road, a commanding site where Abington members still gather to worship, study, and join in various service activities.

For more than two hundred years, Abington was a small rural church that began to grow with the development of the area after World War I.  In 1925 a Parish House was built and by 1930, the session reported 588 members and 424 enrolled in the Sunday school.  After World War II, further residential and commercial development in Abington contributed to a membership explosion.  In 1957 a large Christian Education Building was dedicated and a year later construction began on an enlarged sanctuary building.  Membership in 1960 reached 2,539, and the church school registered 1,463 pupils. This was not the end of the church's growth.  Membership peaked in the early 1970s at over 3000 communicants but has since slowly but steadily declined to roughly 900 today.

Presently, the church stands in the midst of a widely diverse religious community.  It continues a number of mission and youth initiatives; several, such as the Westminster Choir program, were adopted many years ago.  The Music At Abington concert series was begun in the early 1970s and continues today.  The church recently completed a major capital campaign that refurbished the Parish House building.  The church’s historic cemetery was awarded a start historic marker in 1992.