A Century of Presbyterian Response to Immigrants 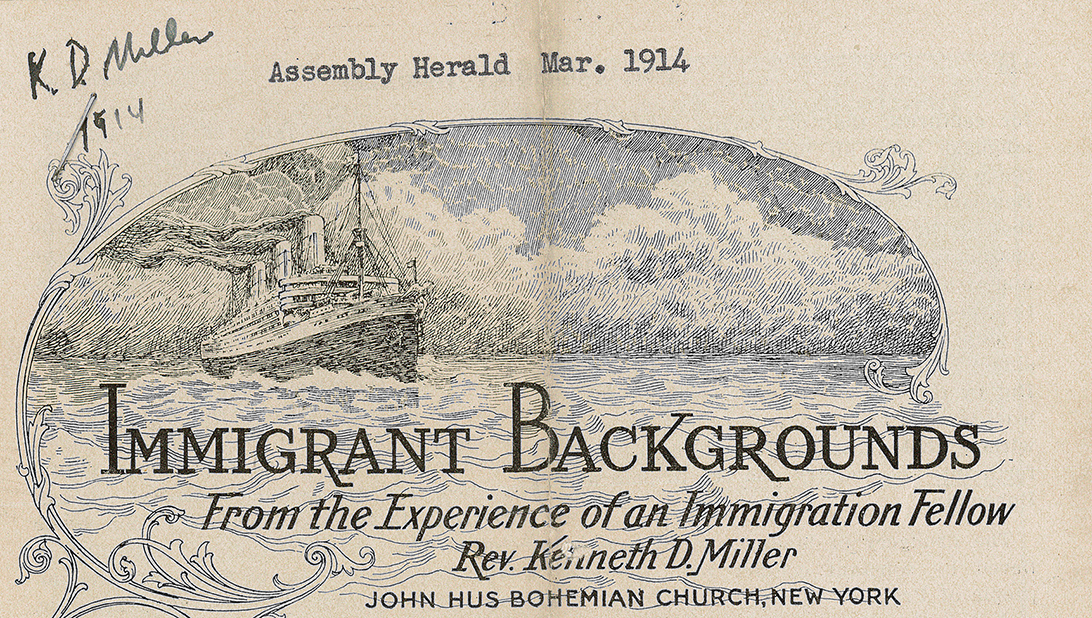 "The Church's Department of Immigration recognized that the issue of immigration was to be a long-term concern for the United States in the 20th century." Assembly Herald, March 1914. From RG 414: Miller, Kenneth Dexter.

The Presbyterian Historical Society is a major repository of stories related to the settling of the United States. Since the 1850s it has shared the stories of immigrant peoples who have entered this country, as well as the ongoing saga of Presbyterian engagement with the human rights struggles for an open and democratic U.S. society. In this election year, when immigration has become a central issue in our national discourse, it seems fitting that we should revisit our historical tradition of providing safe boundaries for refugees fleeing war and political oppression.

As many U.S. governors and presidential candidates have sought to shut off channels for the legal entrance of immigrants into the United States, the official response of the Presbyterian Church (U.S.A.) has been to remind the nation of our immigrant history and the humane standards that have governed the policies of this nation, particularly with regards to refugees from regions beset by political and ideological conflict. Mass migrations followed World War II and the conflicts of the Cold War, with millions of refugees entering the United States from war-torn nations in Western Europe and the Balkans, the Korean Peninsula and Southeast Asia, and Central America. Asylum seekers from Syria, Iraq, and other countries in the Middle East are the latest to seek safer and more secure lives on our shores.

Engagement by the Presbyterian Church in the U.S.A. with new immigrant communities can be traced back to the last decades of the 19th century. Amid new waves of immigrants arriving in the United States from Europe, filling our Eastern and Midwestern cities, and laboring in the mines, mills, and workshops of the growing U.S. industrial economy, one of the Church’s first official responses struck a wary tone. In 1894, the Presbyterian Church in the U.S.A. Board of Home Missions stated: “Every thoughtful man must have some conception of the perils that must arise from the presence in our country of such multitudes of people, a large percent of whom were reared under institutions alien and antagonistic to our own. We shall begin to see the evils and fear the perils until these people become Americanized and Christianized.”

As the cities began to fill and push out their boundaries, it became evident that the Church needed a larger and more encompassing strategy. The Board of Home Missions leadership changed and a person of wider purview, Charles L. Thompson, became its superintendent. Thompson was called from his engaging ministry at Madison Avenue Presbyterian Church in New York City. A leader in the institutional church movement that expanded beyond traditional church ministry to serve the newly emerging needs of the city’s immigrant population, he backed up his concerns by appointing two people who became strong advocates for immigrants: Charles Stelzle and William Shriver.

In 1903, Charles Stelzle began working in a new office, the Workingmen’s Department, the first such office in any denomination. Stelzle, the son of a German immigrant, used his working class roots to reach laborers with immigrant backgrounds. He was the first clergyman to address the American Federation of Labor convention, something he would go on to do for many years.

Shriver, who took up his work at the Department of Immigration on November 1, 1910, had previously established an industrial parish among Italian immigrants in the East Harlem section of New York City. This was the same parish where Norman Thomas—in later years the perennial candidate of the Socialist Party—carried out his initial ministry. Despite the department’s work, and as the conservative church press of the day showed, some church members felt a lingering hostility toward new immigrants.

Under the energetic efforts of Shriver, in March 1911 the first official report of the Department of Immigration named forty centers of immigrant work in cooperation with twenty presbyteries. Seventeen of these immigrant centers were based in New York City under the Presbytery of New York’s Home Missions Committee. Shriver reflected on New York’s immigrant situation: “In this congested Presbytery with population approaching three million, equal that of six Western states, crowded…into its narrow area of one hundred and twenty square miles, Presbyterianism is on trial. Can it readjust itself? Can it sufficiently cope with the changed conditions?”

Shriver recognized that the issue of immigration was to be a long-term concern for the United States in the 20th century. Under his direction, the Department of Immigration organized the Immigrant Fellows Program, which developed both a sensitive approach to immigration and the staffers skilled at relating to growing immigrant communities. The program would provide fellowships of $1,000 to seminary-trained pastors who agreed to serve in an immersion program of 18 months to 2 years of study and research in the regions of Europe where the majority of immigrants hailed from. The seminary-trained pastors, some of whom were recent graduates, would study the language and religious histories of their destinations. After their return to the United States, they would relocate to areas with strong cultural connections to their overseas regions. The work was to be carried out in a neighborhood house or an ethnic congregation, if such existed.

Eight Immigrant Fellows participated in the program beginning in 1911. They were sent to Prague in Bohemia, Krakow in Poland, Budapest in Hungary, Zagreb in Serbia, southwestern Russia, and Italy. The program was cut short in August 1914 by the assassination of the Austrian Archduke Francis Ferdinand by a Serb patriot. The Austro-Hungarian Empire declared war on Serbia; Germany followed with a declaration of war against France and Russia. World War I had begun. Ralph Cummins, one of the fellows residing in Zagreb, was caught in the midst of the outbreak of hostilities. He made his way back to the United States in December 1914.

The Immigrant Fellows Program, though short-lived, provided crucial and groundbreaking leadership to the work of the Presbyterian Church in the U.S.A. in its national church structure, neighborhood houses, and ethnic congregations. By 1914, three-quarters of the expenditures of the Board of Home Missions for immigrant work was spent in the congested urban centers of New York, Chicago, Milwaukee, St. Louis, Baltimore, and Cleveland.

This work went on despite the changing climate toward immigrants following World War I. In 1921, the Department of Immigration attempted to revive the Immigrant Fellows Program under Kenneth Miller, one of the first Immigrant Fellows from 1911. The growing isolationism of the United States following its involvement in the First World War, and the fear of radicals arising out of Russian Bolshevism, bolstered calls to restrict immigration into the United States. Although anti-immigrant forces passed the Immigration Restriction Act of 1921, the Church’s Department of Immigration did not curtail its efforts to support and expand its ministry to immigrant communities already in place. In 1925, the PCUSA supported thirty neighborhood houses in immigrant communities throughout U.S. cities.

In 1923, the Presbyterian Church in the U.S.A. reorganized again with the times. The Board of Home Missions changed its name to the Board of National Missions, and the Department of Immigration expanded and reorganized its activities under the name of the Department of City, Immigrant and Industrial Work. That same year, William Shriver, still a strong voice for the immigrant community, identified three institutional pillars of the Department of Immigration’s work that had been in place since the department’s founding: the foreign language church with a foreign-speaking or bilingual minister, the neighborhood house, and the English speaking church with a foreign constituency.

Twenty five years later, in 1948, as Europe was recovering from the devastation of World War II, the 160th General Assembly of the Presbyterian Church in the U.S.A. spoke about another refugee crisis in Europe using these words: “The United States should pass legislation to bring in at least four hundred thousand displaced persons during the next four years….As they arrive, our church people should stand ready to open their homes and provide work for these unfortunate victims of war.” These sentiments carried forward in the ensuing years and engaged Presbyterians and their congregations, encouraging them to take action on the continuing numbers of people coming to the United States from areas of political unrest and conflict—a policy that originated in the work of the Department of Immigration.

The historical records accessible at the Presbyterian Historical Society show how the PCUSA moved from its late 19th century wariness of immigrants to an openness and strong sense of responsibility about the issues faced by new arrivals in the United States. The spirit of individuals such as William Shriver, whose ministry in the national church lasted thirty years, was carried forward into the late 20th century and beyond. Today, in the 21st century, many Presbyterians are responding to the needs of those seeking a new home in the world with similar conviction. Long may we uphold this American tradition of welcome.

For a more in-depth exploration of this topic by Reverend Poethig, read, "William P. Shriver and the Immigrant Fellows: A Presbyterian Response to Early Twentieth-Century Immigration," Journal of Presbyterian History, Volume 80, No. 3 (Fall 2002), pages 135-152. For information about ordering the Journal, click here.