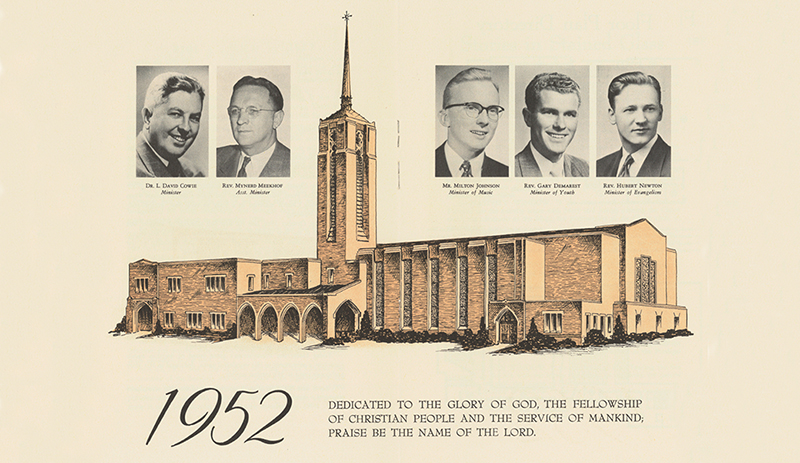 The Presbyterian Historical Society documents the experiences of Presbyterians from across the country. With apologies to our gracious General Assembly hosts in Portland, here are four stories from George Whitworth's Presbyterian Colony in the West:

Within two months of the chartering of the city of Seattle, seven Presbyterian men and women gathered in George Whitworth's home to organize themselves as the First Presbyterian Church of Seattle. Their session first met in 1873, as Whitworth preached alternate Sundays with a Methodist minister. Their first sanctuary was built at the corner of Third and Madison streets in 1877. The church grew rapidly, by 1894 boasting 643 members, and moving into a new building at the corner of Fourth and Spring.

In 1901, the congregation called Mark A. Matthews, a Georgian fundamentalist, to the pulpit. He described the congregation's religion as "thoroughly orthodox, fundamental to the core, premillenial, free from heretical tendencies, modernistic views" and his appeal resonated. By 1907 First Seattle was the third largest congregation in the Presbyterian Church in the U.S.A. (PCUSA) at 2,550 members. Their third building, erected that year for $.5 million dollars (more than $12 million in 2016 dollars), had a cinder track on the roof and audio apparatus in the pews for the hearing impaired. The congregation became the largest in the denomination in 1910, and owing to this influence, Matthews was elected moderator of the PCUSA in 1912.

First Seattle's longest-serving minister was known for his fiery rhetoric and for his espousal of Progressive-era causes, such as consumer safety, temperance, and abolition of prostitution. He was instrumental in the recall of Seattle mayor Hiram Gill in 1911, served on the Seattle Milk Commission, hired a private detective to suss out relationships between the businesses of Seattle's Tenderloin district and local politicians, and testified before Congress on behalf of Japanese immigrants. Matthews was at the same time an opponent of women's rights, a diehard enemy of organized labor, and an anti-Semite. A frequent visitor to Woodrow Wilson's White House, he advocated for the forced removal of recent immigrants from Eastern Europe, owing to their allegedly innate communism and anarchism. As evidence, in a 20 August 1919 letter to Wilson, Matthews proffers the "Protocols of the Meeting of the Zionist Men of Wisdom" as "proof that the Jews constitute a great menace to this country."

By the time of his death in 1940, Matthews' church had 8,818 members in 26 branches, run by a session of 110. Gradually, most of its branches and Sunday schools became independent.

Among them was University Presbyterian Church, on the campus of the University of Washington, established as a Sunday school branch of First Seattle on February 9, 1908. Officially organized that May with 51 members, the congregation met in UW's Sherrick Hall until the construction in 1912 of its first dedicated sanctuary, a wooden building further uphill on 47th Street. The congregation grew rapidly; its first pastor, Norman Harrison, made 1,500 calls in 18 months, chiefly by bicycle. In the 1910s the congregation's Women's Missionary Society supported the work of church members in missions abroad, including the work of Dr. Cora Clementine Bash, superintendent of Douw Hospital in Beijing (now Beijing No. 6 Hospital). Following the postwar boom, the congregation swelled to 4,000 members, and University Seattle remains among the largest congregations in the PC(USA).

On February 25, 1912, 30 African American Presbyterians met with Bethany Presbyterian Church's pastor William Major and agreed to form a congregation. Initially the "Colored Mission" of Bethany, the congregation bought the former Third Cumberland Presbyterian Church building at 22nd and Cherry Streets and installed the Rev. Eugene A. Johnson as pastor on February 12, 1913. Though it would remain a family-sized congregation throughout its life, Grace's membership would contribute in the halls of power. Johnson would be one of three ministers to found the Seattle chapter of the NAACP in October 1913, and he served as a commissioner to the PCUSA General Assembly in 1916. Grace's pastor John Harris would be elected moderator of Seattle Presbytery in 1935. And in 1949, as the PCUSA debated a statement on race relations in plenary, elder Sarah Brown came to the platform to rebut a Florida commissioner's defense of a segregated society: "Thank God that men and women of my race can come into an assembly like this and enjoy it and be treated like human beings." The assembly gave her a standing ovation, and went on to "confess with shame that we have not fulfilled the spirit of our Lord with respect to race relations."

In 1953, the Presbytery of Seattle, identifying Grace and nearby, majority-white Madrona as targets for merger -- Grace had 65 members, Madrona 77 -- forced the closure of Grace and the sale of its building. Money from the sale was to be set aside for repairs to Madrona; instead, its white membership fled, and the Presbytery allocated Grace's money to the purchase of land for a new church on Mercer Island. In 2003, the Presbytery of Seattle formally apologized to the congregation, and the Mercer Island church dedicated $80,000 to the ongoing support of Madrona Grace.

Another flower from the root of First Presbyterian Church, Japanese Presbyterian Church was organized as a branch congregation of First Seattle on June 1, 1907, with Orio Inouye as its first pastor. Inouye would serve as a commissioner to the 1918 General Assembly, only the second minority commissioner from the Presbytery of Seattle. The congregation would move into a new building at Ninth and Weller in 1920.

The congregation's life changed dramatically with the United States' declaration of war against Japan in December 1941. The Civilian Exclusion Order of March 23, 1942 forced the internment of immigrants from Japan (Issei) and their children (Nisei), and within a month, 550 Japanese American members of First Seattle were removed, and support for their minister was discontinued. Most members of the congregation were interned at Minidoka Relocation Center in Hunt, Idaho, alongside 6,000 of their neighbors from King County. Some members of the congregation would enlist in the U.S. armed forces; two of them, Haruso Ashida and George Sawada, would die in the Allied invasion of Italy.

On March 28, 1947, Japanese Presbyterian Church was reorganized by presbytery with 88 members. In 1960, the site at Ninth and Weller was slated to be demolished for the construction of Interstate 5. The congregation moved to a new building at 24th and Grand, founded with the dedication, "Tomorrow's work will never be done."

Is your congregation represented in the national archives of the PC(USA)? Let us help you with that.