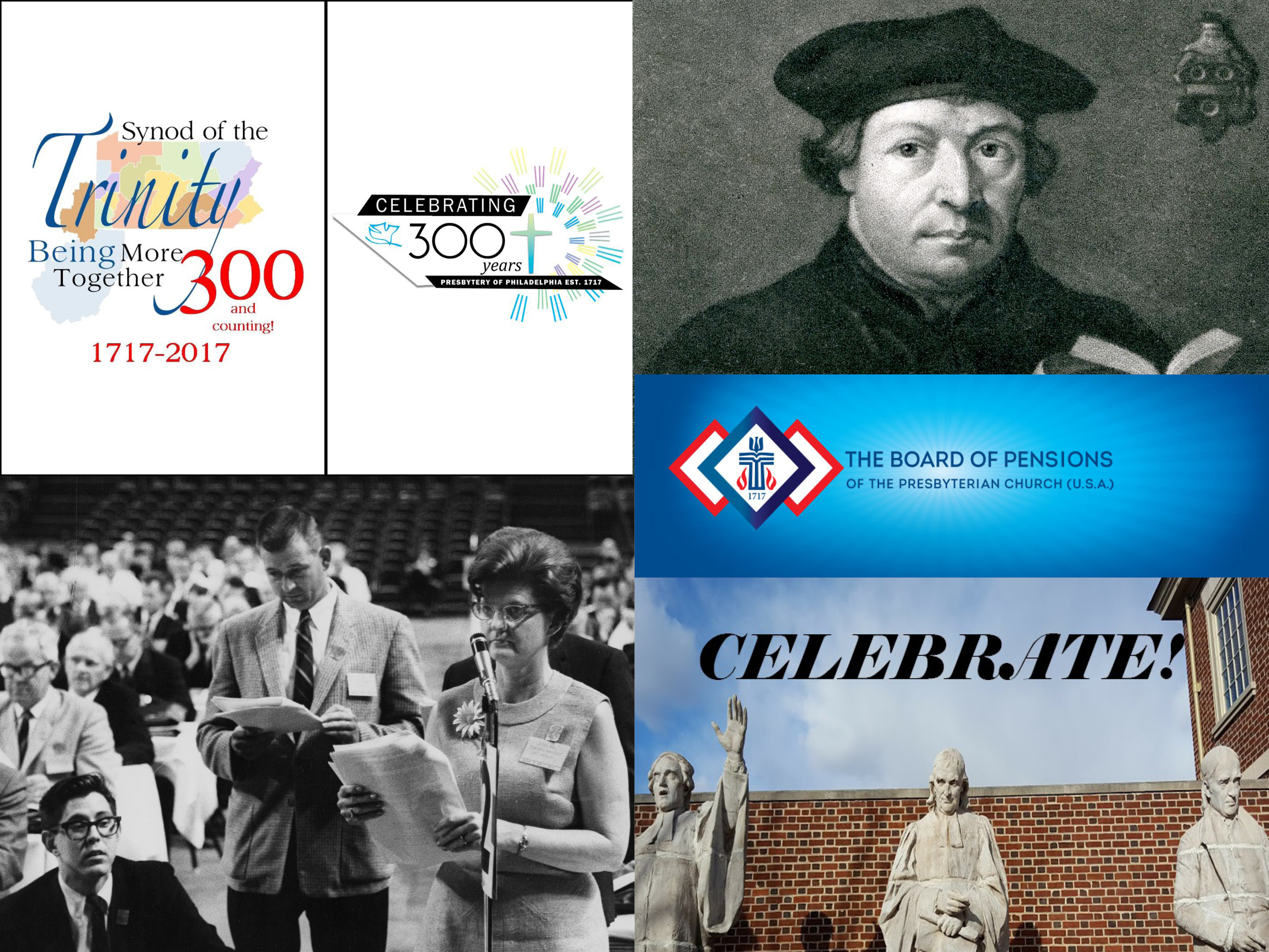 Each new year brings us forward in time. 2017 also takes us back.

The calendar for the next twelve months presents an impressive number of historic celebrations and significant remembrances closely linked to Presbyterianism in America and around the world. At PHS we’ll be connecting these commemorations to the Society’s service ministry using our 2017 theme: Celebrate, Remember, Share.[1]

The word “anniversary” was first used for Catholic feasts commemorating saints. Ironic--and yet ecumenically fitting--that the world’s Reformed churches will celebrate the 500th anniversary of the Protestant Reformation and Martin Luther’s 95 Theses in 2017. Other major anniversaries Presbyterians will focus on include the 300th of the Synod of the Trinity and the Presbytery of Philadelphia, the 300th of the Board of Pensions, the 50th of the Presbyterian Historical Society at 425 Lombard Street, and the 50th of the Confession of 1967. These milestones relate to each other like ripples in a pond. Without the Reformation there would be no Protestantism as we know it, no American Presbyterianism, no first presbytery, no 1967 General Assembly. And without the significant role Philadelphia played in the early history of the Church, the Historical Society would not have been founded in the “Cradle of Liberty” in 1852.

In 1967, PHS relocated to a faux-Colonial building in Society Hill. Fifty years later, in April 2017, our newest cultural neighbor, the Museum of the American Revolution, will open its doors to the public for the first time. That same month PHS will install our own in-house exhibit exploring the “Presbyterian Rebellion” in America. Display items and future online resources will come from the PHS collections; the Presbyterian Heritage Center in Montreat; and Northern and Southern congregations featured in the exhibit, including stories about Patriots, Loyalists, and the many Americans who preferred neither side during the Revolution.

On May 4, we’ll be hosting our first open-air fundraising party. While celebrating the building’s 50th anniversary and the return of six conserved Alexander Stirling Calder statues to the PHS courtyard, Taste of History will bring Presbyterians from around the country together with Philadelphians for a multi-vendor food and drinks tasting. Guests will gather in our redesigned courtyard featuring the new Stated Clerk Square, in front of our time-defying facade that is again flanked by Calder’s statues. Three of the famous Presbyterians sculpted into nine-foot casts of terra cotta played major roles in the build up to Revolution or the Revolution itself: John Witherspoon, Samuel Davies, and James Caldwell.

In the fall of 2017, PHS and area congregations will participate in the Presbytery of Philadelphia’s 300th Anniversary worship celebration, as well as the worldwide commemorations of the 95 Theses. Friends of PHS and the Presbyterian Foundation will travel to Europe on a Reformation Study tour.

Luther's theses nailed to the church door in Wittenberg. Engraved by Johann Leonhard Raab, from a drawing by F. Lessing. Via Foundations of the Faith exhibit.

At the same time PHS celebrates so much, we’ll also remember events and movements that divided people or caused longstanding disagreement and pain--in America, Europe, and throughout the missionary diaspora. While lifting up Luther’s commitment to the Gospels, literacy, and a personal relationship to God, we will call out his anti-semitism, which had tragic ramifications in his time and during the rise of the Nazi party in 1930s Germany. As we celebrate the history of Presbyterians in Philadelphia and New York City, we will remember those times when Presbyterians and fellow Protestants encouraged ethnic, racial, or religious exclusions--including the 1850s when nativist Know-Nothings rioted against Catholics. As immigration continues to dominate much of the national discussion, we will remind Presbyterians and researchers of America’s unique migrant past, and of the Presbyterian Church’s historical outreach to new groups, including Presbyterian responses to the dislocation and incarceration of Japanese Americans on the West Coast during World War II.

All history is open to interpretation, and to reinterpretation. As with the unpersuaded of the American Revolution, positions and actions are often neither one extreme nor another, but somewhere in the muddled middle. While PHS celebrates and remembers, we want to serve as a space for discussions and independent research projects that freely interpret unique documents and artifacts from our holdings, and that advance new understandings of how the past is leading us into the future. American Presbyterians have been involved with every major social issue since the founding of the nation. In this year's communications we’ll be reflecting on Presbyterian connections to African American history, World War I, missionary involvement with native populations in North America and overseas, and previous waves of asylum seekers. As the Stated Clerk travels and preaches on behalf of the denomination--including upcoming trips to Alaska, Cuba, St. Louis, and Wittenberg--we’ll provide historical context about related places, figures, and ideas and about other issues that we hope will interest and inspire you.

That’s where the third word in this year's theme comes in: share. We will share what we’re working on with you, and we'd like very much to hear back about upcoming celebrations and remembrances you're honoring. Please contact PHS staff directly through Facebook, Twitter, or Instagram, or email us your historic news or question; if you have a research query, or a church anniversary you’re beginning to plan for, email our reference archivists at refdesk@history.pcusa.org or call us at 215-627-1852. If you know someone who would like to receive our e-newsletter, we'd love for them to sign up here.

Lastly, please tell us what you like about our work and what you'd like us to reform--in 2017 and beyond.

[1] "Share" comes from our mission statement: “To collect, preserve, and share the American Presbyterian experience.” Over the next two years we will stress the other pillars of our mission--not just to share what is already in our collection, but to collect new items that document an ever changing church and to preserve that history through a state-of-the-art facility.