St. Louis Churches: Past and Present 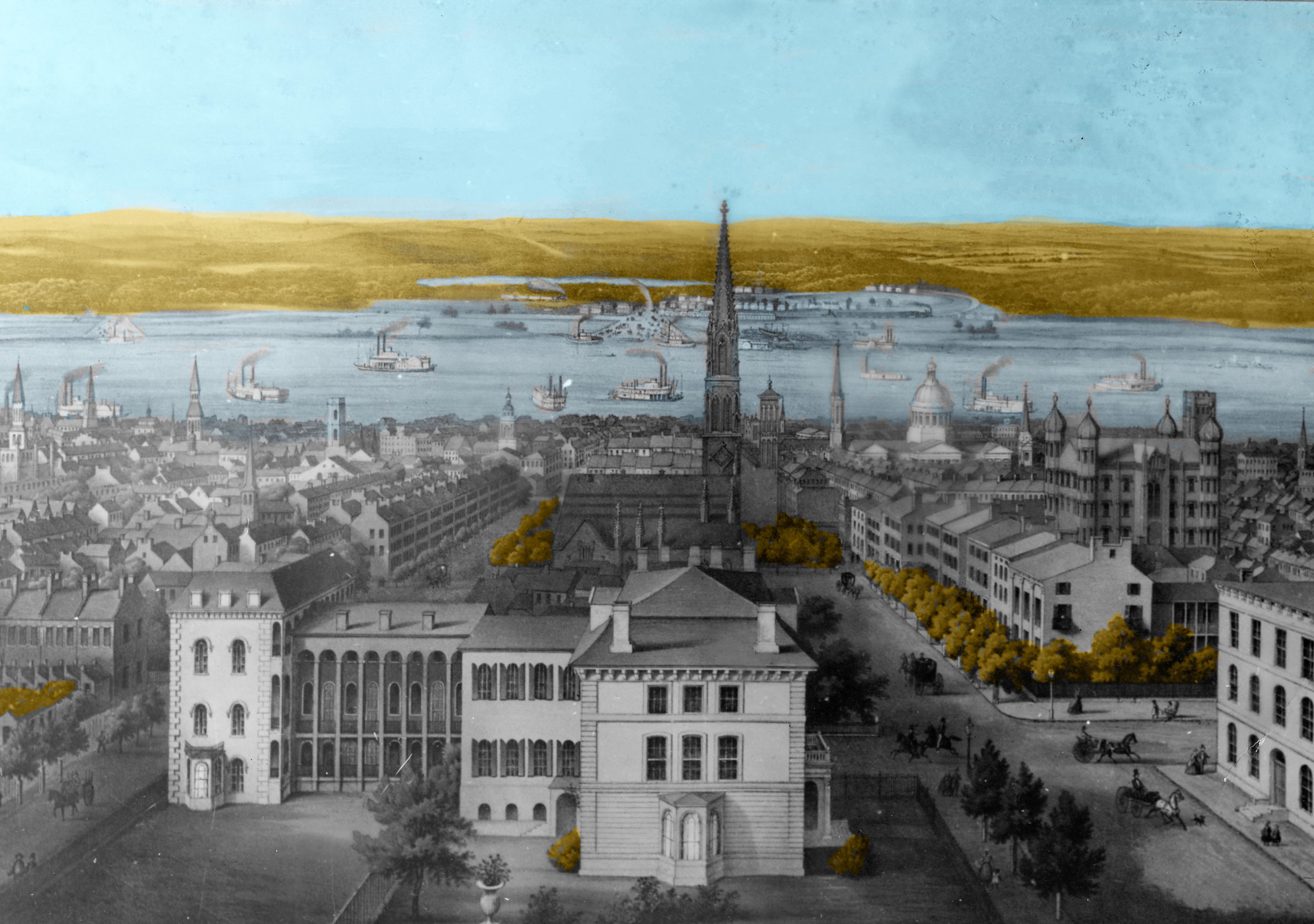 As Presbyterians around the country prepare to gather in St. Louis for Big Tent next month, the “Hands & Feet" initiative provides an opportunity for Presbyterians to witness to the gospel of Jesus Christ at the local level. Presbyterians in St. Louis have been engaged in serving Christ and their community for over 200 years. Last year we wrote a blog post about the Berea Presbyterian Church at 108. Here are some additional stories about historic area congregations.

Today's Presbytery of Giddings-Lovejoy gets its name from two pioneering Presbyterian leaders. On November 15, 1817, Reverend Salmon Giddings (1782-1828) organized the First Presbyterian Church, St. Louis, Missouri. Elijah P. Lovejoy (1802-1837) arrived in St. Louis ten years later, in 1827, and opened a private high school. He joined the First Presbyterian Church in 1832 and soon after enrolled in Princeton Theological Seminary. He returned to St. Louis and preached at the Des Peres Presbyterian Church, in addition to publishing a newspaper to promote religion, morality, and education. Over time, Reverend Lovejoy became an ardent abolitionist and expressed these views in his newspaper as well as the pulpit. When he returned from a General Assembly meeting in Pittsburgh in 1836, he found a mob had damaged his press. He moved his newspaper across the Mississippi River to Alton in Illinois, a free state, but continued to face violence for his views on slavery. On the night of November 7, 1837, Lovejoy was shot and killed by a mob while defending his press and the fight against slavery. The Lovejoy Monument/Lovejoy Gravesite in Alton, Illinois, is No. 398 on the American Presbyterian and Reformed Historic Sites Registry. The First Presbyterian Church is currently involved in a variety of mission and outreach efforts including the Room at the Inn homeless shelter, the Nicaragua Partnership Committee, and SHED (Safe Homes for the Elderly and Disabled).

One of the earliest congregations in the St. Louis area, the St. Charles Presbyterian Church, St. Charles, Missouri, was organized by the Presbytery of St. Louis on August 30, 1818. When the General Assembly of the Presbyterian Church in the U.S.A. (PCUSA) separated into Old School and New School factions, the church in St. Charles voted to affiliate with the Old School. In the years following the Civil War, the congregation affiliated with the Presbyterian Church in the U.S. (PCUS). Early members of the congregation, Mary Easton Sibley and George Sibley, founded Lindenwood Female College, in 1827--the oldest college west of the Mississippi River. In 1969, the college became co-educational, and in 1997 it became Lindenwood University. In 1957, the St. Charles Presbyterian Church and Lindenwood College dedicated a new chapel. As the Church prepares for its bicentennial next year, it continues to serve the community in vital ways such as annual mission trips by high school youth, sponsoring a Fair Trade shopping event, hosting regular family fellowship events, and operating a preschool program.

Trinity Presbyterian Church, University City, Missouri, was first organized in 1840 as the First Associate Reformed Church of St. Louis by a group of Scots Covenanters who believed that God’s grace is for everyone and were staunchly abolitionist. More than a century later, in 1953, the congregation merged with the Kingshighway Cumberland Presbyterian Church and changed its name to Trinity Presbyterian Church. The Cumberland Presbyterian Church (CPC) was organized in 1810 after an extended and bitter controversy with the General Assembly of the PCUSA, which began with worship, broadened to theology, and ended with polity. While many CPC congregations united with the PCUSA in 1906, a large minority did not. A number of social services in St. Louis have roots to Trinity, including Youth Emergency Service and the English Language School. Trinity continues to operate a large food pantry and hosts an after-school tutoring program and summer enrichment program called Lolly’s Place.

The Cote Brilliante Presbyterian Church in St. Louis has an inspiring story of renewal and rebirth. First organized in September 1885, out of an interdenominational mission school and chapel, the congregation grew and prospered for decades with a predominantly white membership. In 1945, Mr. J.D. Shelley, an African American man, bought a house in the neighborhood unaware of a restrictive covenant that had existed on that property since 1911. The case of Shelley vs. Kraemer went all the way to the U.S. Supreme Court, which in 1948 rendered a landmark decision holding that racially restrictive covenants in housing violated the Fourteenth Amendment. Many African Americans began moving into the neighborhood, but few of the members of the Cote Brilliante Presbyterian Church reached out to their new neighbors. By 1956, most members had abandoned the church for the suburbs. The Presbytery of St. Louis stipulated that the church re-open as a mission to African Americans and that the name “Cote Brilliante” (Shining Hill in French) be retained. The Presbytery recruited the Reverend William G. Gillespie (1931-2011), a graduate of Johnson C. Smith Theological Seminary, to oversee the rebirth of the congregation. He arrived in St. Louis in August 1956 to take on this significant challenge. In addition to being the pastor, Rev. Gillespie assumed the role of janitor, groundskeeper, and secretary. He served the church for 53 years and built up a thriving congregation that continues today with ministries such as the Pilots program, the J.O.Y. Club (Jesus, Others and then Yourself), and the Men’s Community Bible Study.

These stories form only the tip of the arch-shaped iceberg that is St. Louis Presbyterian history. If you have information or photographs about these or other St. Louis congregations, please share them with us on Facebook, Twitter, or Instagram--or in person at the Office of the General Assembly booths during Big Tent or the 2018 General Assembly.