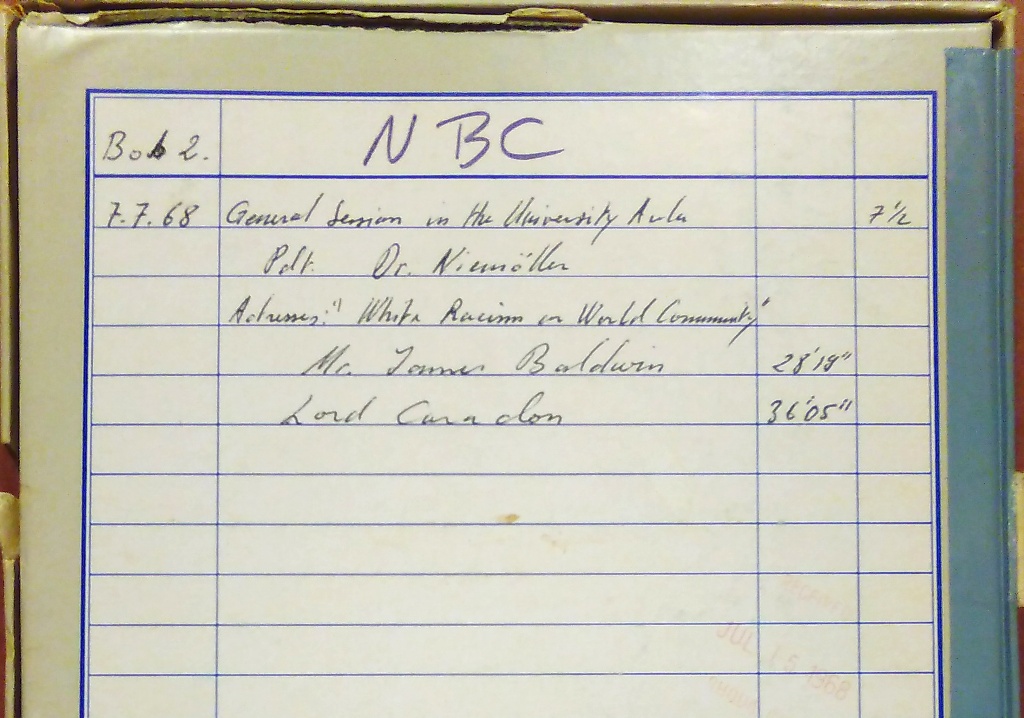 On July 7, 1968, James Baldwin took the dais at the World Council of Churches meeting in Uppsala, Sweden, the headline speaker of a panel address called "White Racism or World Community?"

In 2003, a set of two open-reel audio tape recordings of the event came to the Presbyterian Historical Society via the National Council of the Churches of Christ in the U.S.A. In celebration of the 49th anniversary of the event, we'd like to share an excerpt from his speech about the passage from petitioner to revolutionary undertaken by Stokely Carmichael.

Baldwin's overarching message to the European audience, relying on Matthew 25 as a guidepost, is that Christianity has the responsibility and the capacity to oppose and undo white supremacy. As he describes Stokely Carmichael's turn to black nationalism, he notes first that as a Freedom Rider and SNCC organizer Carmichael began his work as a peaceful petitioner:

"And a day came, inevitably when this young man grew weary of petitioning our heedless population and said in effect what all revolutionaries have always said: I have petitioned you and petitioned you. And you can petition for a long long time but the moment comes when the petitioner is no longer a petitioner but has become a beggar. And at that moment, one concludes, You will not do it. You cannot do it. It is not in you to do it. And therefore I must do it."
Addressing white Christians' shock at Carmichael's adoption of Black Power in 1966, Baldwin is uncompromising:
"It is astounding and it says a great deal about Christendom that whereas Black Power, the conjunction of the word black with the word power, frightens everybody, no one in Christendom appears seriously to be frightened by the operation and the nature of white power. Stokely may make terrifying speeches -- though they're not terrifying to me I must say -- and Stokely may be -- though I don't believe it -- a racist in reverse. But in fact he is not nearly so dangerous as the people who now rule South Africa.
"He is not nearly as dangerous.
"He's not nearly as dangerous as many of the people who govern in my poor country."
Baldwin's personal papers, including many open-reel audio tape recordings, have recently been acquired by The Schomburg Center for Research in Black Culture at The New York Public Library.
As Presbyterians gather in St. Louis under the Big Tent theme, Race, Reconciliation and Reformation, PHS staff will join them in reflection and action.
Print
African American...