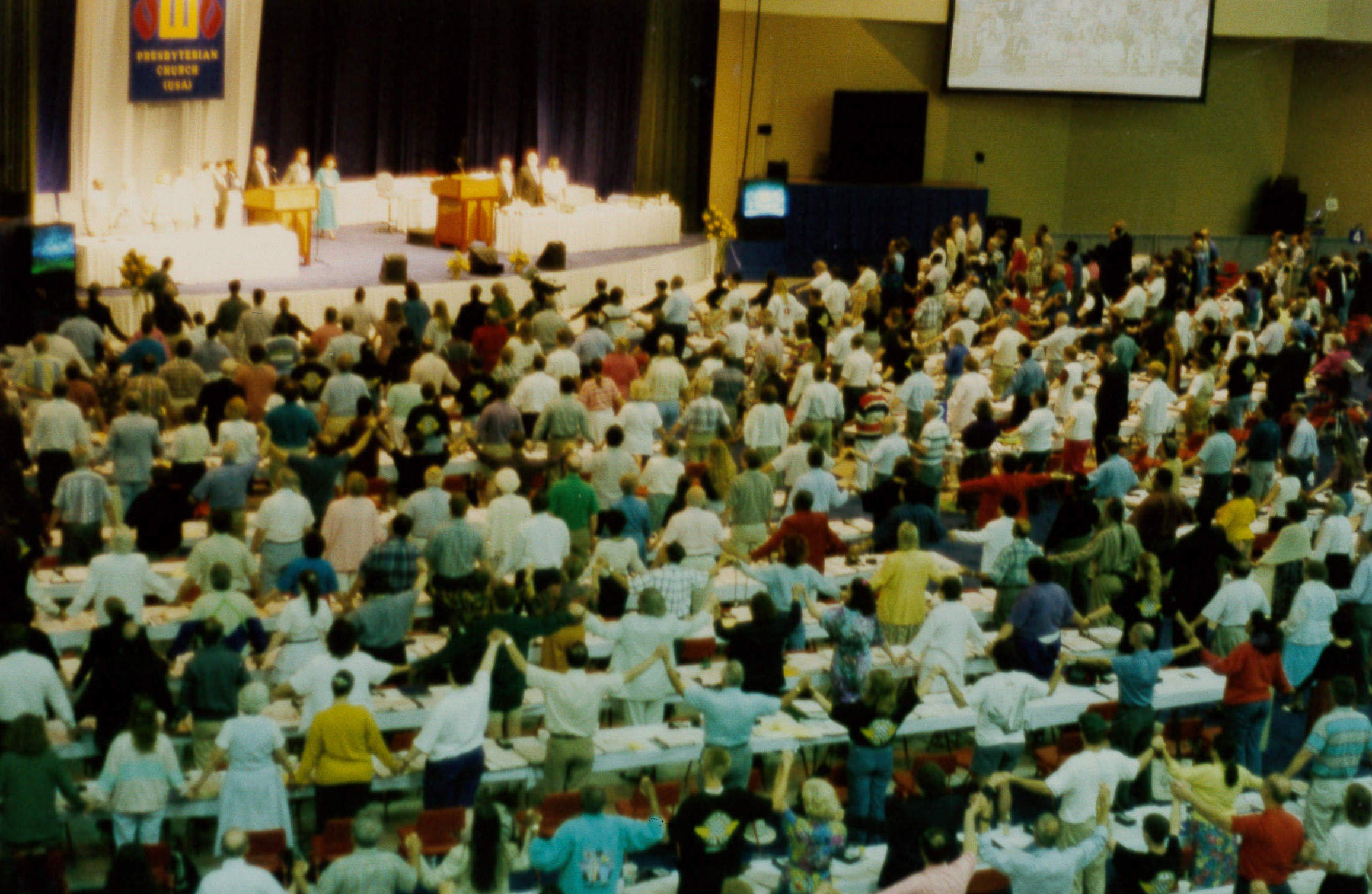 "Realizing that they had witnessed a miracle that could bring the church back together, the commissioners stood and applauded, held hands and sang."

The Presbytery of Wabash Valley reported out from General Assembly in its July 1994 newsletter that the June Assembly, in Wichita, Kansas, "experienced a great emotional swing -- from despair and concern to euphoria."

Despair and concern were occasioned by the feminist Re-Imagining Conference of November 1993 in Minneapolis. Wild reports of paganism and heresy flowed in the wake of the meeting, and a campaign of character assassination against its chief organizer, Director of the PC(USA) Women's Ministry Unit Mary Ann Lundy, was undertaken by outraged non-Presbyterians.

Mary Ann Lundy, speaking with the Religious Coalition for Abortion Rights, 1994, via C-Span

Fifty overtures regarding Re-Imagining were brought to Committee 02, General Assembly Council Review; the committee also contended with two commissioners' resolutions. Most called for the Assembly to empanel commissions, task forces, or boards of inquiry to investigate the conference's organizers. The Presbytery of Memphis called for GAC staff to resign, and called for presbyteries to withhold per capita funds from the national agency offices until such resignations occurred. The Presbytery of Santa Fe's overture, on the other hand, commended the national agency staff who attended Re-Imagining. The Presbytery of Missouri River Valley overtured the Assembly to take no action, and sued for peace.

The committee answered these 52 items with its own resolution calling upon all Presbyterians to engage in reconciliation:

A consequence of this controversy has been the impression that the church is indifferent to the pain and estrangement of women and has ignored the fact that women's concerns are not always welcome at the center of the church's life.

We affirm that Scripture and Reformed speech about God include feminine and masculine images.

We affirm in the strongest possible terms that the body of Christ is made up of women and men.

God calls both women and men to ministries in the life of the church. Any attempt to silence or marginalize any voices is not worthy of Christ's body.

We reaffirm our church's commitment to solidarity with women, especially in the important task of thinking theologically.

The resolution was approved 549-4-2. The Wabash Valley Current exulted: "Applause and singing of the Doxology and Amazing Grace went on for a period of at least thirty minutes."