On August 18, 1920, Tennessee became the 36th state to ratify the 19th Amendment, providing the three-fourths majority necessary to finally make women’s suffrage a reality after a seven-decade-long effort that began at the July 1848 Seneca Falls, New York women’s rights convention. In the days following Tennessee’s ratification, opponents of suffrage tried to rescind its decision on a technicality, and some legislators even left the state so there would be no quorum if a new vote should be called. Happily, these efforts failed, and Tennessee transmitted the certified record of ratification to Washington, D.C., where, with little fanfare, Secretary of State Bainbridge Colby proclaimed the amendment’s passage on August 26, 1920. No representatives from the current generation of suffragists, heirs to more than 70 years of speeches, debates, organization, and action, were invited to witness the proclamation.

A hundred years later, in a month notable for Kamala Harris’s nomination for vice president on the Democratic ticket – only the third woman vice presidential candidate on a major party ticket – PHS wants to celebrate the anniversary of women’s suffrage with all the fanfare lacking from Secretary Colby’s proclamation. Unfortunately, our collections and databases are also quiet on the subject – a fact that likely has to do with the circumscribed role of women in nineteenth-century Presbyterianism, as well as long-standing biases about what kinds of materials, and from which creators, are worth collecting. 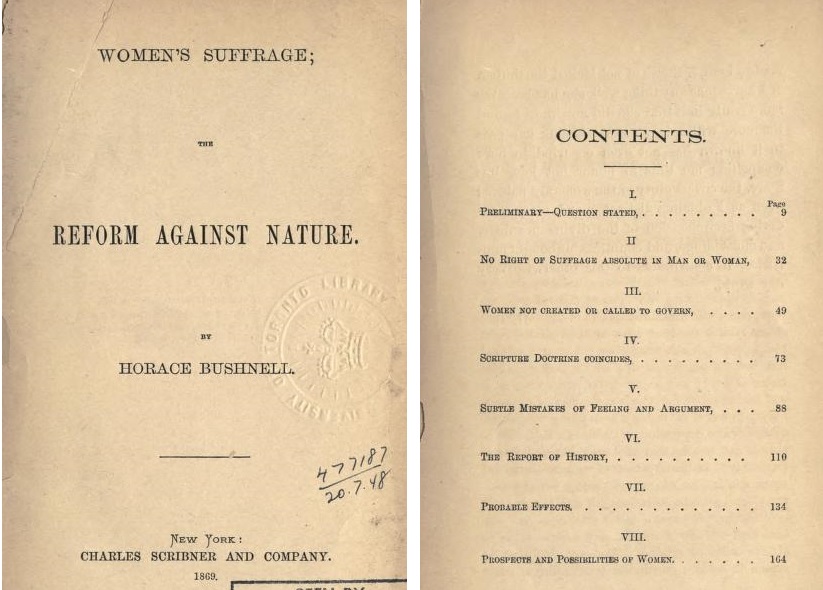 "Women’s Suffrage: The Reform Against Nature," is one of the few items that comes up if you search PHS’s Calvin library catalog for “suffrage.”

Nineteenth-century America was a far less secular world than our own, and, as Evelyn Kirkley notes in “‘This work is God’s cause,’” “religion was used in both pro-and anti-suffrage arguments” – regrettably, more often on the latter side.1

Indeed, no sooner had the women’s rights movement begun at Seneca Falls than it confronted “a problem identical to one that faced its parent, the abolitionist movement.... [M]ost Americans...believe[ed] that the scriptures were literally the word of God, infallible not only in matters of moral and religious truth, but also in regard to statements of scientific, historical, and geographic fact.”2 Thus, Biblical passages that presented women as subordinate to men, and responsible for the introduction of sin into God’s perfect world, were marshaled by theologians, clergy, and congregants as evidence that women’s inequality was divinely ordained. Scripture was also interpreted more “gently” to argue that women must be kept separate and unequal in order to preserve their purity. Women were “angels of the house” who hovered above the dirty, comprised, male public sphere. Their natural ambit was the domestic world, in which they reared good, Christian children. To introduce to women the taint of property rights, professional work outside the home, and politics would sully their divinely-ordered repute as naturally homebound. Such thinking is evinced in PHS collection items like Jonathan Stearn’s sermon Female Influence and the True Christian Mode of its Exercise, Ebenezer Platt Roger’s sermon The Obligation and Duties of the Female Sex to Christianity, and Horace Bushnell’s book Women’s Suffrage: The Reform Against Nature. 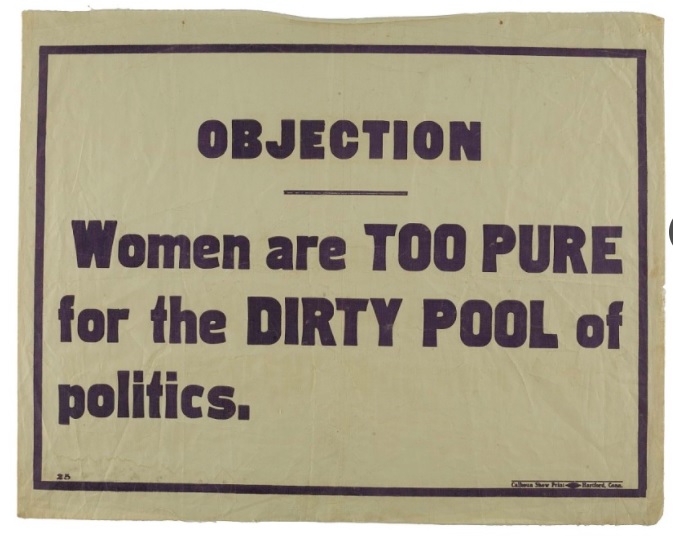 Women’s roles within American Presbyterian denominations were similarly limited. According to Brackenridge and Boyd, though not explicitly stated as such in any General Assembly resolution, the earliest “[American] Presbyterian church fathers, functioning in a context of Reformed theology and Presbyterian order as mandated by the Westminster Confession” understood scripture pertaining to women, particularly First Corinthians and First Timothy, as forbidding women to speak, preach, or pray aloud in mixed assemblies of the church.”3 While in practice women were increasingly engaged in church activities throughout the nineteenth century by serving on church boards, teaching Sunday School, leading Bible studies, lecturing on mission work, and agitating for temperance, they were slow to gain official privileges. The General Assembly of the Presbyterian Church in the U.S.A. (PCUSA) ratified a constitutional change allowing women to be ordained as deacons in 1922, and as ruling elders in 1930. In 1906, the United Presbyterian Church of North America (UPCNA)’s General Assembly allowed women to hold the office of deacon, though it never took on the question of ruling elders. The Presbyterian Church of the United States (PCUS) permitted women to stand for election as deacons in 1916.

It's no surprise, then, that it is more difficult to find pro-suffrage statements and sentiments than the opposite in the official pronouncements of the PCUSA, the UPCNA, and the PCUS, or in the personal papers of male Presbyterian ministers and missionaries in PHS’s collections. A search for “suffrage” or “woman’s vote” turns up almost no resources explicitly engaged with that topic. However, we suspect there are rich veins to mine in the records of Presbyterian women’s groups such as women’s missionary societies and women’s auxiliaries. And, given the fact that the American temperance movement supported a woman’s right to vote in the hopes that newly-enfranchised women would vote for Prohibition, might there be some hidden gems about suffrage in our temperance-related collections such as the Presbyterian Church in the U.S.A. Presbyterian Women's Temperance Association records, or the records of the National Temperance Society and Publication House. What might researchers find when they explore our materials about Temperance crusader Marie C. Brehm or the diaries of Anna Young Thompson, who worked for the World Christian Temperance Union after retiring from missionary work? 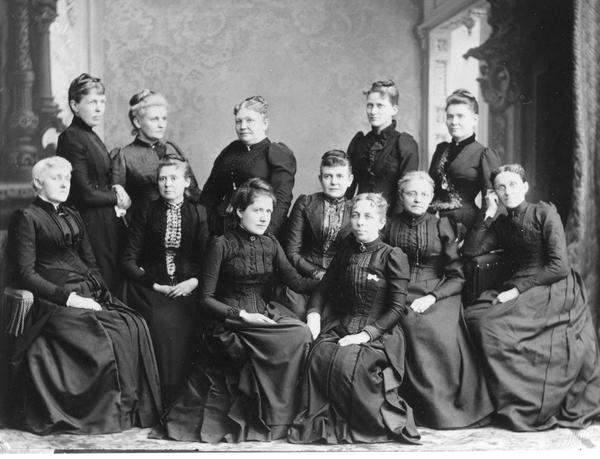 PHS’s collections include records of women’s groups like the UPCNA’s Women’s Missionary Society. Research might reveal if any members of the Board of Directors, pictured here, were suffragists. [Pearl ID: 5206]

Other items in our collections hint at untold stories that add detail to the broad narrative of religion’s role in the passage of women’s suffrage. The Presbytery of Steubenville’s records, for instance, might shed light on that presbytery’s decision to pass a resolution in support of woman’s suffrage. The resolution prompted one Rev. Eagleson to bring a complaint against Steubenville, which was heard by the 1914 General Assembly. The Assembly sustained the complaint, but only on the grounds that “synods and councils are to handle or conclude nothing, but that which is ecclesiastical and are not to intermeddle with civil affairs which concern the commonwealth,” lest the “Church becom[e] entangled...with political or other organizations of a non-ecclesiastical character.”4 Two years later, under no such compunction, the ecumenical Federal Council of the Churches of Christ in America issued a call to action that outlined the case for women’s equality and requested a “yea” vote on the November 1917 Women’s Suffrage Amendment. 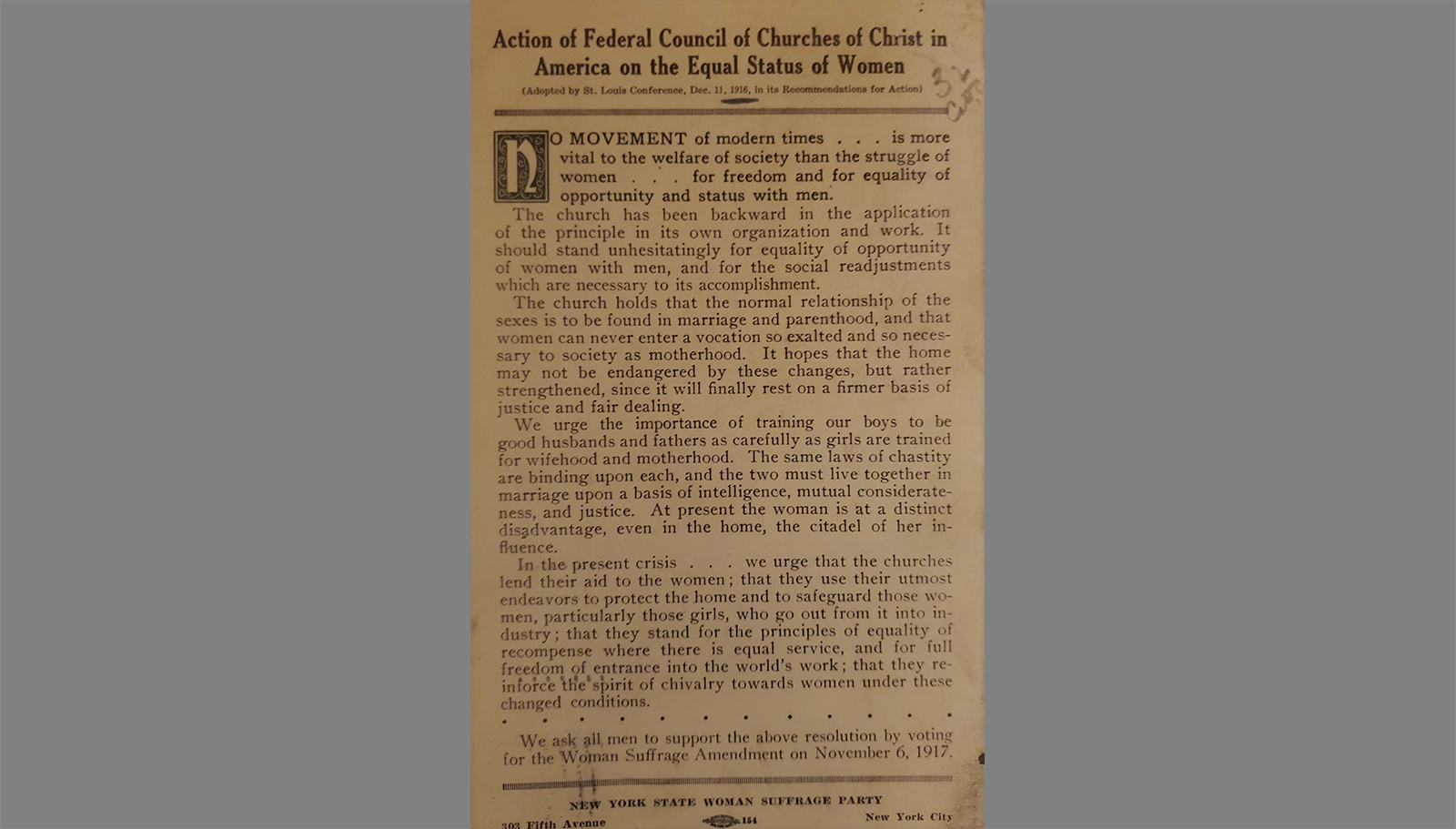 FCC pamphlet in support of woman suffrage, found in the Federal Council of the Churches of Christ in America Records. Click here for full image.

What might our collections reveal about the forces that moved the PCUSA’s position from 1914’s anxiety about entanglements with civil affairs to 1917’s emphatic resolution in support of the vote for women: “[W]e, the Commissioners to the General Assembly of the Presbyterian Church of the U.S.A., assert our belief in the justice, wisdom, and righteousness of the immediate enfranchisement of women throughout the nation”?5

Minutes of the 1917 PCUSA General Assembly, showing the commissioners’ resolution in support of woman suffrage, as well as the nay-sayers.

As Beverly Zink-Sawyer notes in From Preachers to Suffragists: Woman’s Rights and Religious Conviction in the Lives of Three Nineteenth-Century American Clergywoman, “despite the essentially religious nature of arguments...for and against woman’s rights that characterized much of the gender debate of the nineteenth century, the religious dimension of the woman’s rights/woman suffrage movement has been ignored or discounted.”6 Zink-Sawyer’s book, which traces the careers of Antoinette Brown Blackwell, Olympia Brown, and Anna Howard Shaw, considers the broadly Protestant dimension of the movement, while Rick Nutt’s article “Presbyterians and Women’s Suffrage“ looks specifically at how the Presbyterian Church in the U.S. responded to the “call for women’s suffrage in the years 1870 to 1920.”7 We hope that the collections at PHS will help future researchers fill in the details of Presbyterian engagement with women’s suffrage and other under-represented chapters of American history.