Corporate Environmentalism and the PC(USA) 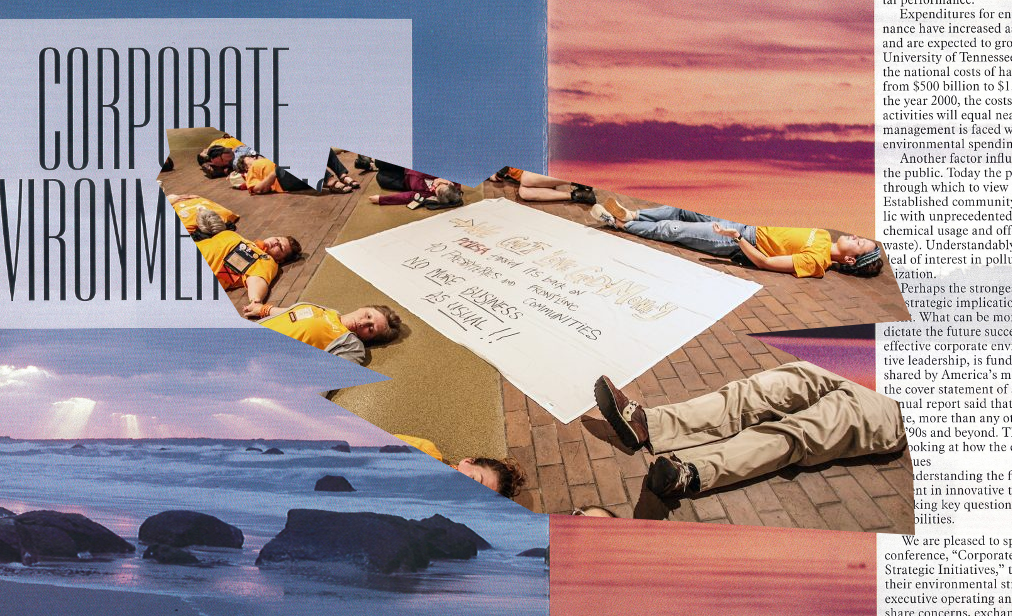 In 1995, the PC(USA) Mission Responsibility Through Investment office wrote letters to insurers and re-insurers, asking after their exposure to climate change risk, and whether they would limit investment in fossil fuels. After a quarter of a century--and one name change, from MRTI to the Office of Faith-Based Investing and Corporate Engagement--the Church continues a strategy of outreach to corporations responsible for the rapid warming of Earth's atmosphere, and to those whose business models stand the most to lose from climate change. Now that the COP26 UN Global Climate Change Conference has wrapped, let's reexamine Presbyterian corporate engagement with the fossil fuel industry.

Corporate engagement did not gain preeminence out of nowhere. It is possible to view it as a strategy ratified by hard-won success in the struggle against apartheid South Africa. Beginning in 1965, five years after the Sharpeville massacre, the UPCUSA General Assembly passed overtures calling on Americans to put pressure on the apartheid regime. Successive Assemblies' mandates to educate the polity about apartheid, and to change the economic support that the United States gave to the apartheid regime, developed into a new office called Mission Responsibility Through Investment.

In the 1970s, the UPCUSA continued to support an arms and oil embargo on South Africa, and MRTI worked to persuade US firms with interests there--such as Ford, Citicorp, GE, and Exxon--to change their business model. By the early 1980s divestment was normalized by institutions like Harvard, which removed $51 million from Citicorp because of its business with the RSA. By 1985 the global call to end apartheid was strong enough that major Presbyterian leaders were confident in joining the World Council of Churches in Harare, Zimbabwe, and calling for divestment and a consumer boycott of South Africa. Exxon divested from South Africa in 1987. Negotiations to end apartheid began in 1990.

Under the assumption that divestment and boycott were effective tools, and that corporate engagement could wield at least the latter, in the wake of the first IPCC report on climate MRTI turned toward engagement with the insurance industry. The first letters of 1995, written by veteran MRTI staffer Bill Somplatsky-Jarman, were meant to appeal to insurers' interests: "The events provoking this concern are the floods and hurricanes growing in frequency and severity and causing multibillion dollar damages in the United States and abroad." Climate change even threatened small insurers with bankruptcy.

The letters also represented the PC(USA), with $4 billion dollars in assets under investment, as concerned about the long-term health of their investments in both the insurance and the fossil fuel sectors: "There is a fear that companies in industries that perpetuate our dependence on coal, oil, and gas also leave themselves open to litigation." The letters end with three requests: Has the company studied climate change? Is the company taking steps to manage climate-related losses? And, Does the company "attempt to limit its financial or legal exposure to investments in activities dependent on fossil fuels?" 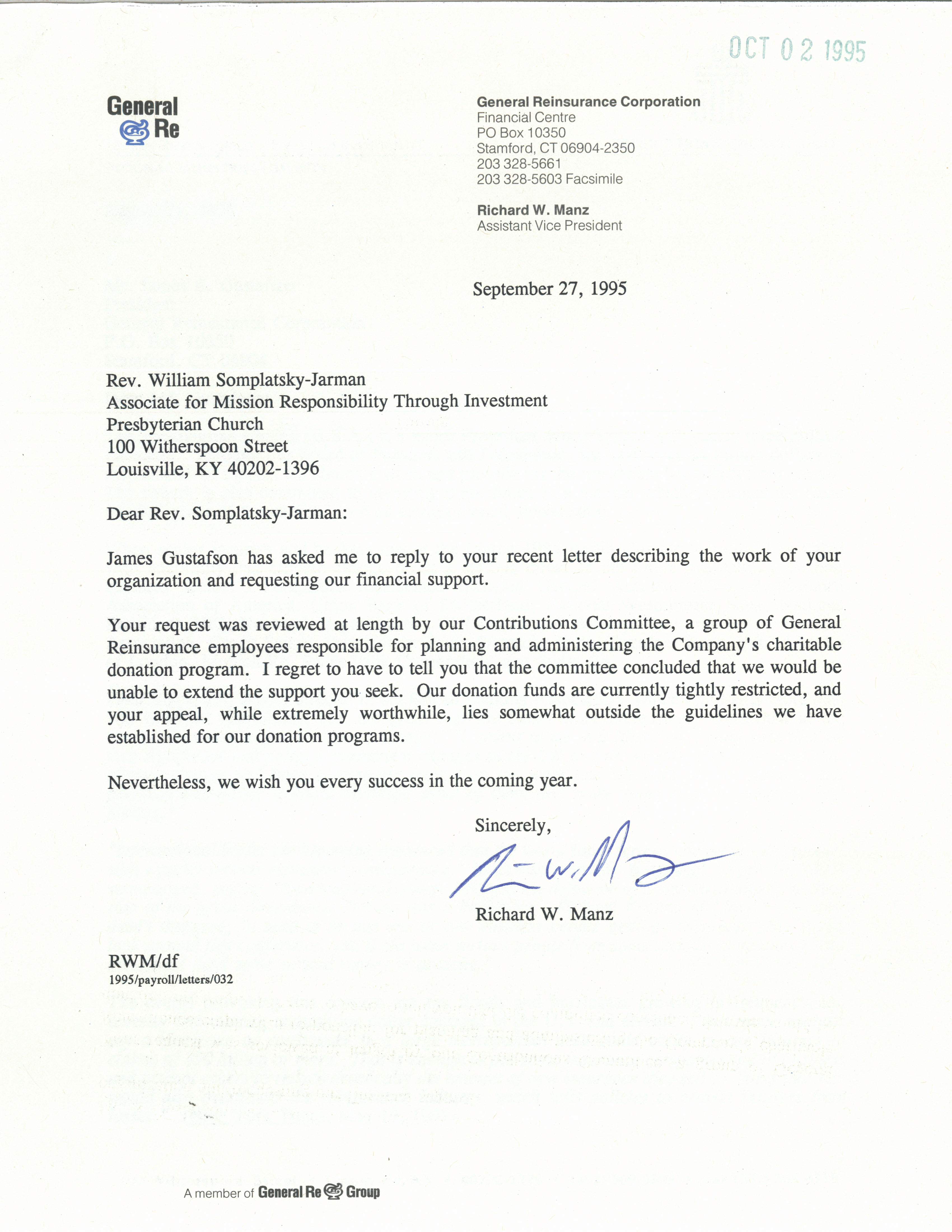 Responses varied. General Reinsurance Corporation interpreted the MRTI letter as a fundraising appeal and waved the Church off. The company would be purchased in 1998 by Warren Buffett's Berkshire Hathaway group, and continues to operate as a subsidiary. Neither it nor its parent has a coal-exclusion policy. General Reinsurance underwrites the operations of PZU, the largest fossil fuel insurer in Eastern Europe. PZU, in turn, insures the operations of Bełchatów, the biggest greenhouse gas emitter in Europe. In 2016, Bełchatów released more carbon dioxide than the entire nation of Switzerland. 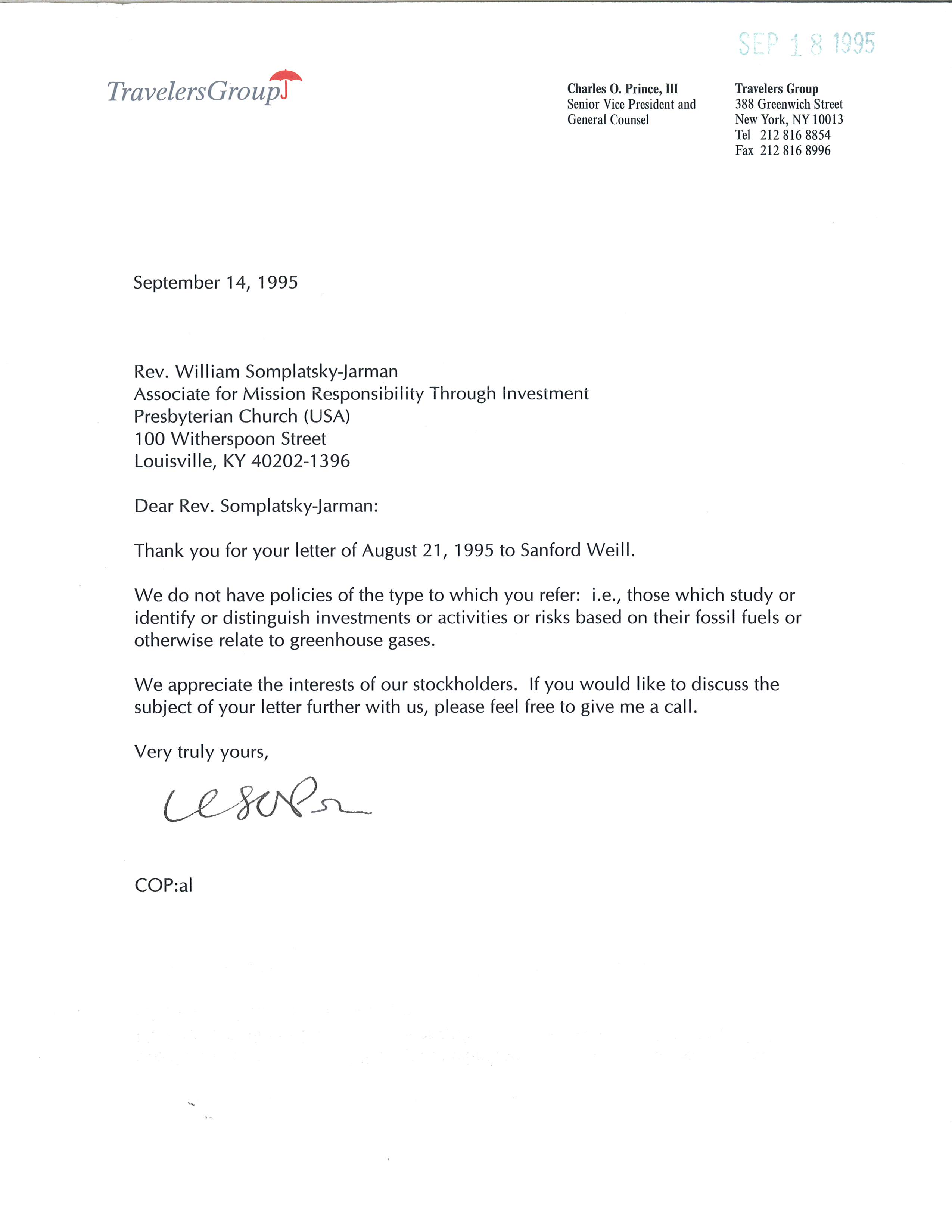 On September 14, 1995, Travelers Group's Charles O. Prince III replied in one sentence: "We do not have policies of the type to which you refer: i.e., those which study or identify or distinguish investments or activities or risks based on their fossil fuels or otherwise relate to greenhouse gases." As of 2020, Travelers still had "zero policies to address the company’s fossil fuel insurance coverage or investments" and had $3.5 billion dollars invested in fossil fuels. Travelers remains among a handful of insurers that has no restrictions on underwriting fossil fuel operations, and no plans to divest.

On September 25, 1995, Peter Jokiel of CNA replied to Somplatsky-Jarman with sympathy and a dose of climate denialism. "The existence and impact of global warming still appear to be a matter of some debate within the scientific community. Nevertheless, the business and catastrophe management strategies of CNA incorporate the assumption that global warming is a fact, and that the frequency of natural phenomena resulting in significant property loss is likely to increase." As of 2014, CNA held $2 billion in oil and gas.

What affected insurance companies' responses to what, logically, should have been existential threats to their business models? Insurers, unlike the apartheid South Africa regime, were not squeezed between the hammer of armed resistance and the anvil of global opprobrium. MRTI's appeal--climate change is a risk to you--was undermined by public policy, and by changed business practices. The Federal Emergency Management Administration funds the National Flood Insurance Program, which is administered by private insurers. This is not only a backstop against bankruptcy for insurers facing losses from paying out their own claims, but an opportunity for profit, as insurers receive fees from FEMA for administering NFIP. In the wake of Hurricane Sandy, one investigation found that those profit margins were 30%--insurers made $400 million after the storm.

After nearly 30 years of corporate environmentalism, four consecutive General Assemblies have quashed or punted on fossil fuel divestment. In 2014 the Presbytery of Boston overtured the General Assembly to instruct the Board of Pensions and the Presbyterian Foundation to liquidate their holdings in fossil fuel companies and to reinvest in renewable energy. The Assembly referred the overture to MRTI for study. In January of 2016, MRTI recommended a strategy of corporate engagement instead of divestment. At the 2016 General Assembly in Portland, the divestment overture was approved by committee, alongside a minority report holding MRTI's position; the Assembly approved the minority report, 391-161 -- seventy votes fewer than the 2014 referral to MRTI. The same outcome happened in 2018.

The overture appeared again at the 2020 General Assembly, which referred most of its business to 2022, and the Presbytery of Hudson River is bringing it back to the GA in June 2022. In early 2020, MRTI recommended that three fossil fuel companies--ExxonMobil, Marathon Petroleum, and Valero Energy--be added to the 2021 General Assembly Divestment/Proscription list. Because of the streamlined business of the 2020 GA, the recommendation was not voted on and the three companies "continue to be evaluated against the Guideline Metrics Framework" of MRTI as of 2021.

While nationwide Presbyterian action may be slow in coming, local action is occurring. Significantly, the Presbytery of National Capital has published a guide for Presbyterians to divestment from fossil fuels, which notes the declining value and profitability of fossil fuel companies, and acquaints readers with "greenwashing."

What has not changed over the past 30 years is the increasing concentration of greenhouse gases in Earth's atmosphere. In May, the International Energy Agency affirmed other organizations' conclusions that in order to keep global average surface temperature below a 1.5 degree Celsius rise, oil and gas exploration must stop now. 2021 is projected to have the second-highest year-on-year emissions increase on record, and oil and gas companies are expected to increase capacity. The U.S. government in August reopened oil lease auctions in the Gulf of Mexico, likely to produce "1.1 billion barrels of crude oil and 4.4 trillion cubic feet of natural gas." 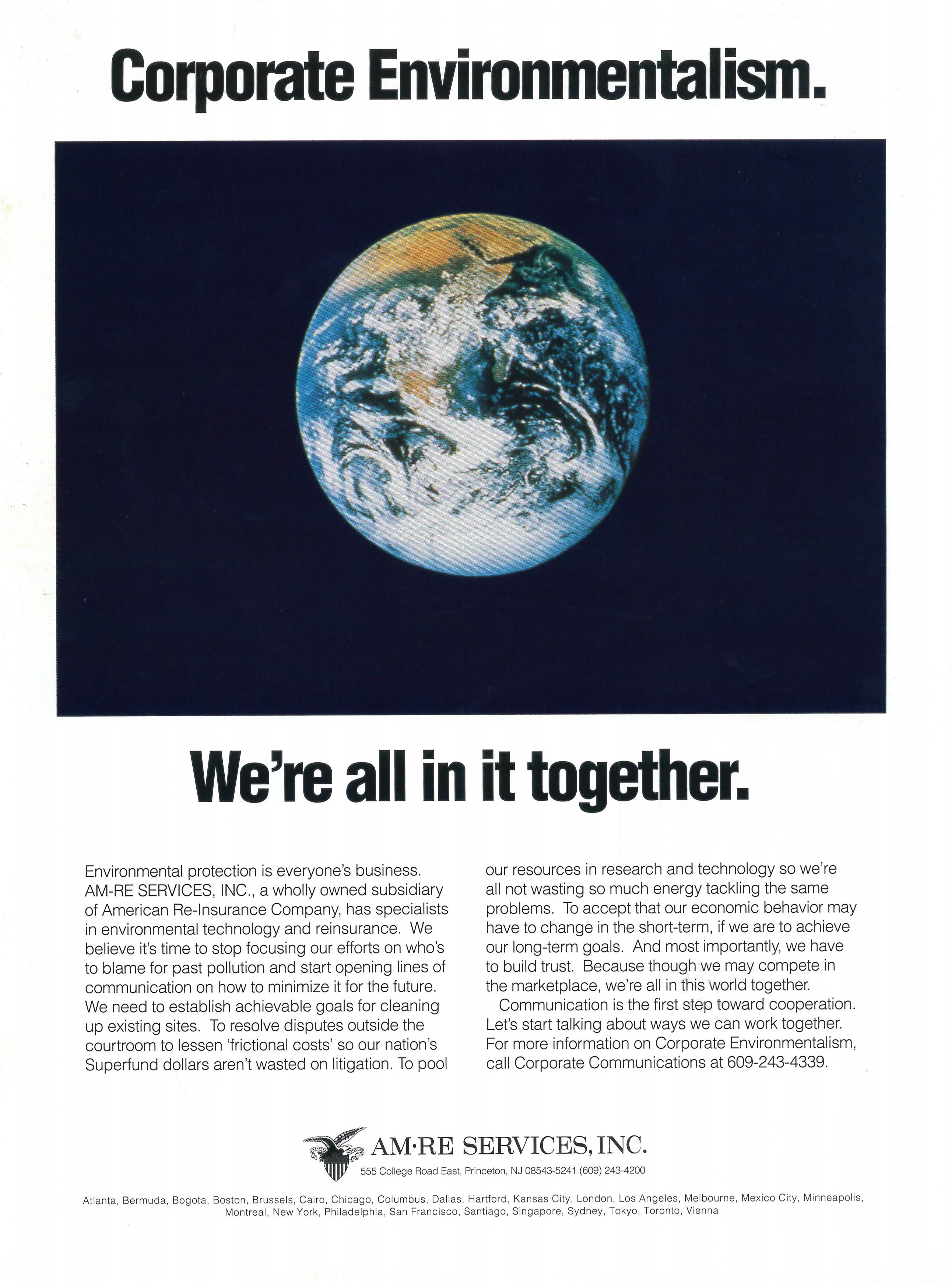 The United Nations Environment Program recently wrote that Paris Agreement countries have made minimal progress toward their pledges to halve carbon emissions by 2030. Paris Agreement countries reduced emissions by 7.5% between 2015 and 2021, largely the result of the one-year 5.4% decline in emissions in the wake of the COVID-19 pandemic. Other authors write, with these tepid pledges in place, that the best-case scenario for mitigating catastrophic global heating is not happening. This is largely due to the long productive lifespan of new coal mines, oil wells, and gas fields, which from the perspective of their operators, should produce for 40 to 60 years.

Given that reality, will other forms of pressure emerge? In the 1980s, at the peak of the nuclear arms race, Presbyterians mobilized around the Nuclear Freeze, even going so far as to examine non-violent resistance to the United States defense industry in the document "Presbyterians and Peacemaking: Are We Now Called To Resistance?" Over several months in 2016 and 2017, the Catholic Workers Jessica Reznicek and Ruby Montoya torched portions of the Dakota Access Pipeline, causing millions of dollars in damage. Reznicek was sentenced to eight years in prison earlier this summer.

Whatever strategies emerge, writers like Andreas Malm question the sufficiency of current environmental engagement efforts, asking what we in 2021 are supposed to say to our children: "Do we say that we’ve done what we could, tried the means at our disposal and failed? Do we conclude that the only thing left is learning to die--a position already propounded by some--and slide down the side of the crater into three, four, eight degrees of warming? Or is there another phase, beyond peaceful protest?"

Fossil Fuels and the General Assembly (2018)

And Justice For All: The Movement For Environmental Justice (1995)