The 1933 General Assembly On War And Capitalism

At the 1933 PCUSA General Assembly in Columbus, Ohio, the Social Welfare committee recommended maintaining prohibition, decried pre-Hays Code movies and comics -- alliteratively accosting "the putrid picture and the polluted page" -- and then turned to address war and poverty.

That January Adolf Hitler had been installed as chancellor of Germany, and by the time of GA the Third Reich had started its first concentration camps, and held its first book burnings. The Assembly in Columbus was reminded, in this atmosphere of war and rumors of war, of their own faith in the Prince of Peace.

"The nations have made a business of producing warmakers; the Church must produce the peacemakers. We rejoice in the fact that our government has joined with sixty-two other nations in signing the Paris Pact as follows:

'The high contracting parties agree that the settlement, or solution of all disputes or conflicts of whatever nature, or whatever origin they may be, which may rise among them, shall never be sought except by pacific means.'

In the light of this pact we declare it to be our faith that our army and navy ought never to be used except for the purpose of resisting invasion and that the United States ought to set an example to the world by adopting a program of progressive disarmament."

While this invocation of the use of armed force to only repel invasion carries overtones of the period's isolationism, the committee moves on to a broader vision. For them, the call of the peacemaker wasn't just to oppose military adventurism. It meant to oppose the conditions that spawned militarism at home and Nazism abroad.

The committee called for an end to the private armaments industry "in order that the temptation to the manufacturers of both munitions and war may be removed from private parties," for federal protections for conscientious objectors, and for the end of compulsory military training in high schools. JROTC units, established in the Defense Act of 1916, had swelled over the course of the 1920s.  The committee viewed enrolling children in martial life with abhorrence:

"We pledge ourselves to teach the coming generation of the cost and curse of war, to saturate them with a passion for peace, to cultivate in them the conviction that the world will be more blessed by friendships than by battleships" 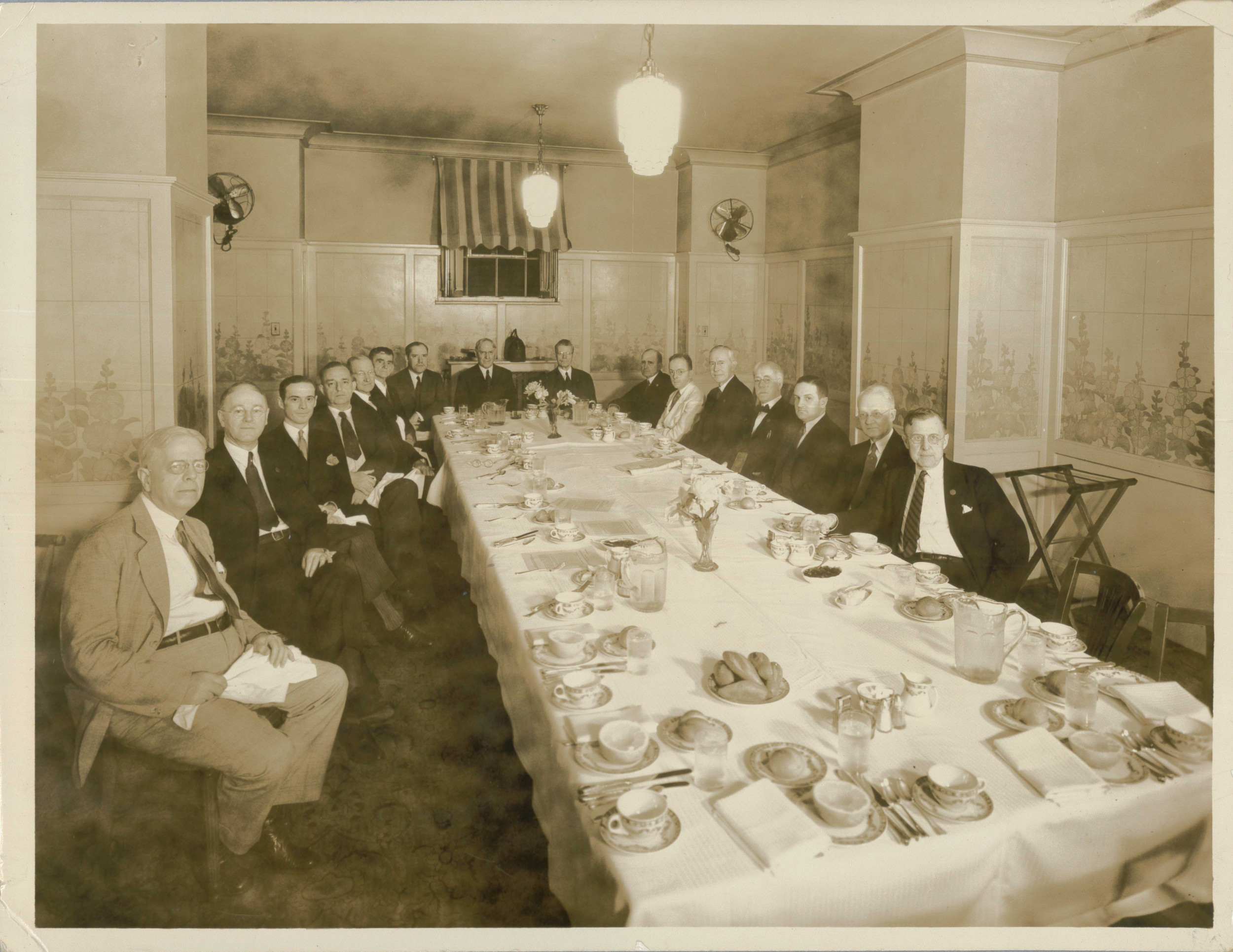 Committee chairmen of the 1933 GA at breakfast. Moderator John McDowell, with glasses, at far rear. Accession 05-0919a.

The committee was not alone in connecting the incipient war economy with declining standards of living for ordinary people. The message rang out from settlement houses, the Labor Temple, the Presbyterian Institute of Industrial Relations, and even from the pages of Nashville's Presbyterian Banner, which ran an editorial on the profits of armaments makers:

"Thinkers have long contended that all wars had at their base desire for economic gains. How curious would it be to find the nation called to arms for Vickers, Ltd., or for U. S. Steel or some other big corporation which secures its greatest profits in time of war!" 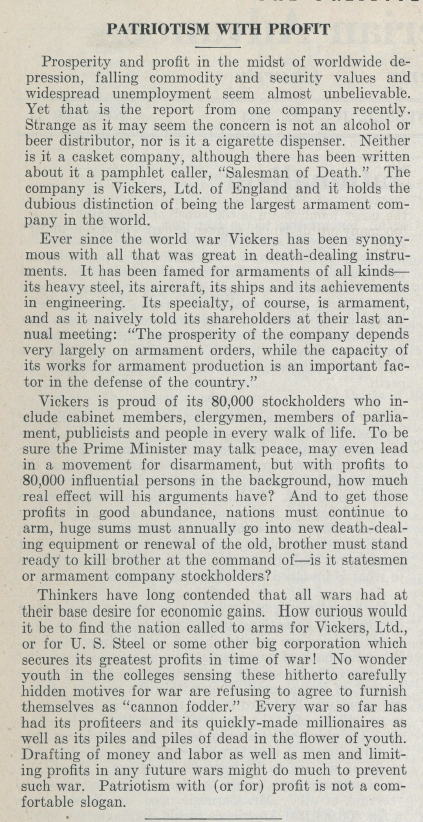 The committee then turned to address the Great Depression, entering its fourth year. Throughout its statement the committee makes plain that material security for people and the protection of bare life are not just matters of secular order and economics, but are moral requisites, ordained by God.

"As the Body of Christ, the Christian Church must be the most swiftly-moving of all organizations to challenge whatever cripples or dishonors life, to insist that no economic emergency justifies human oppression; that if the right to live interferes with profits, profits must necessarily give way to that right."

They go on to call into question the legitimacy of any social order that fails to provide for all people.

"Christians have a mandate from the Christian conscience to question an economic order where the only answer to our industrial problems is charity drives, breadlines and apple venders. As Christians we need to affirm that if the present order will not and cannot adapt itself to the social conscience, based on Christian ideals, then it must give way to some more just and righteous social order that will answer our problems."

The committee reported out a nine-point program of Christian witness in the face of alienating unemployment and poverty. The program included controls on the acquisition of wealth, "a living wage as an irreducible minimum," reduced labor hours to ensure "sufficient leisure," safeguards for women in the workplace, the abolition of child labor, and the sanctity of collective bargaining. 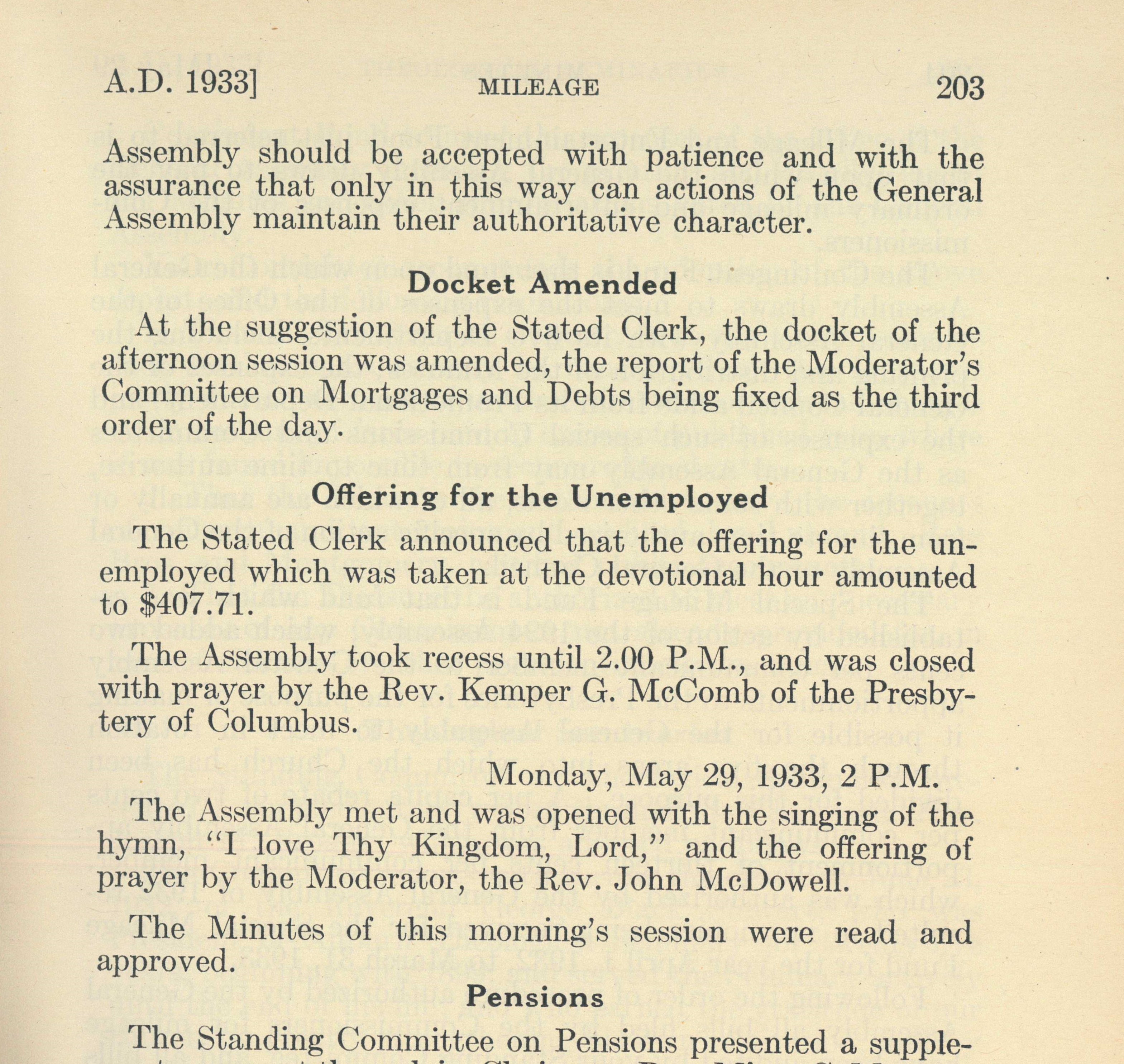 Minutes of the General Assembly, 1933.

Former moderator Charles W. Kerr of Tulsa, Oklahoma moved to take up an offering for Columbus's unemployed people. The 800-plus commissioners passed the hat, and the Assembly sent a check to the mayor of Columbus for $407.71. That October, 37,698 people in Columbus would be on relief.