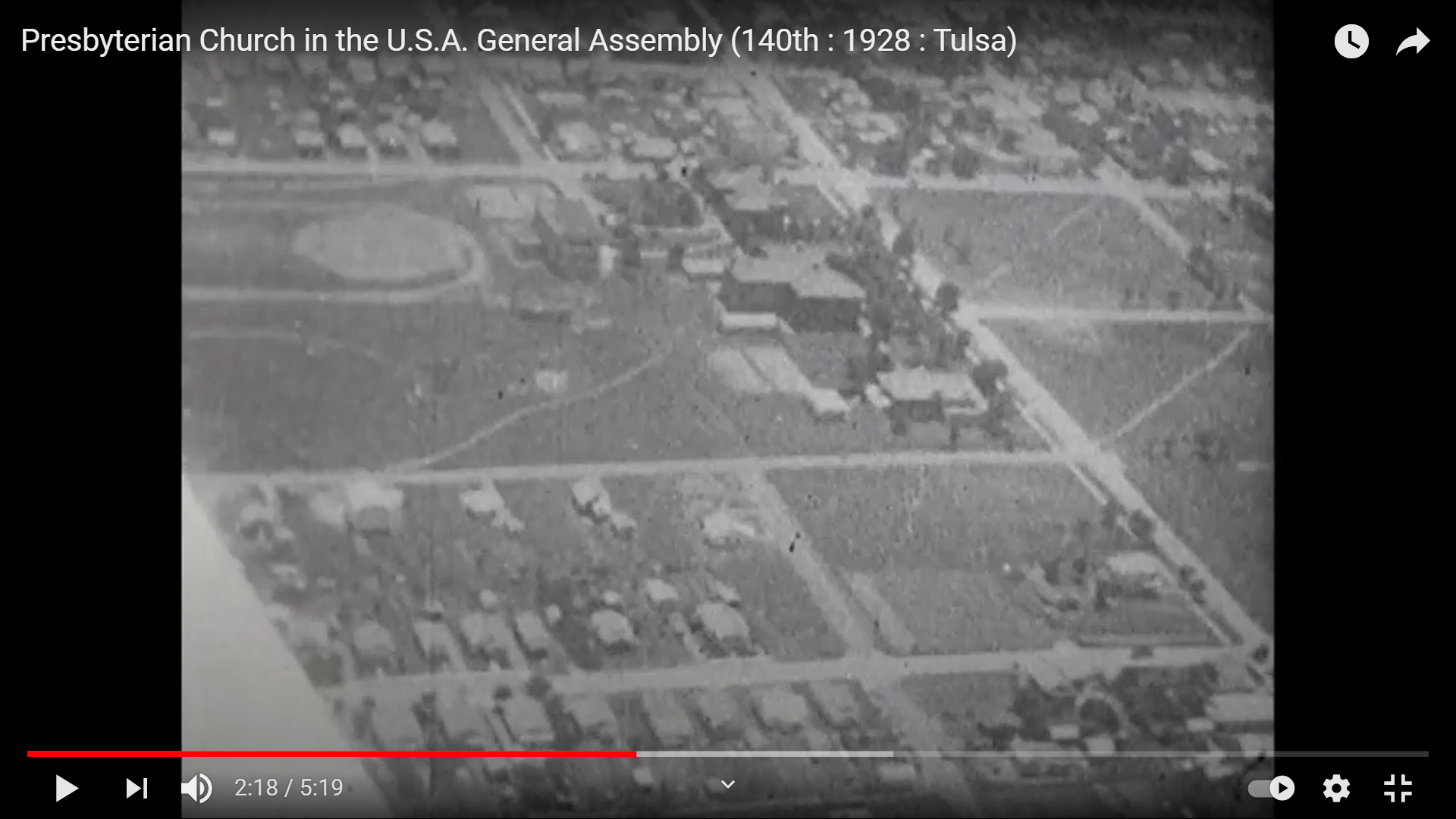 On June 1, 1921 the Black section of Tulsa, Oklahoma--Greenwood, known as Black Wall Street, where Black migrants from the South had prospered in the city’s oil boom--was burned down by white rioters. The governor called in the National Guard and evacuated Tulsa’s Black population, some 6,000 people, to the city convention center and fairgrounds. Three hundred people are estimated to have been killed. Presbyterians were present during the events leading to the massacre, were present in the midst of them, and are reckoning with them today.

On the evening of May 31, 1921, as masses of white and Black Tulsans gathered at the courthouse to surround and defend the young Black man Dick Rowland, Rev. Charles Kerr, the long-serving pastor of First Presbyterian Church, drove downtown with his son Hawley to try to disperse the crowd. Hawley had strict instructions to remain in the car, no matter what. In Tulsa historian Hannibal Johnson’s recent book, Black Wall Street 100, Kerr walked to the courthouse steps, and announced to the crowd, “You may kill him, but you will have to kill me first.” 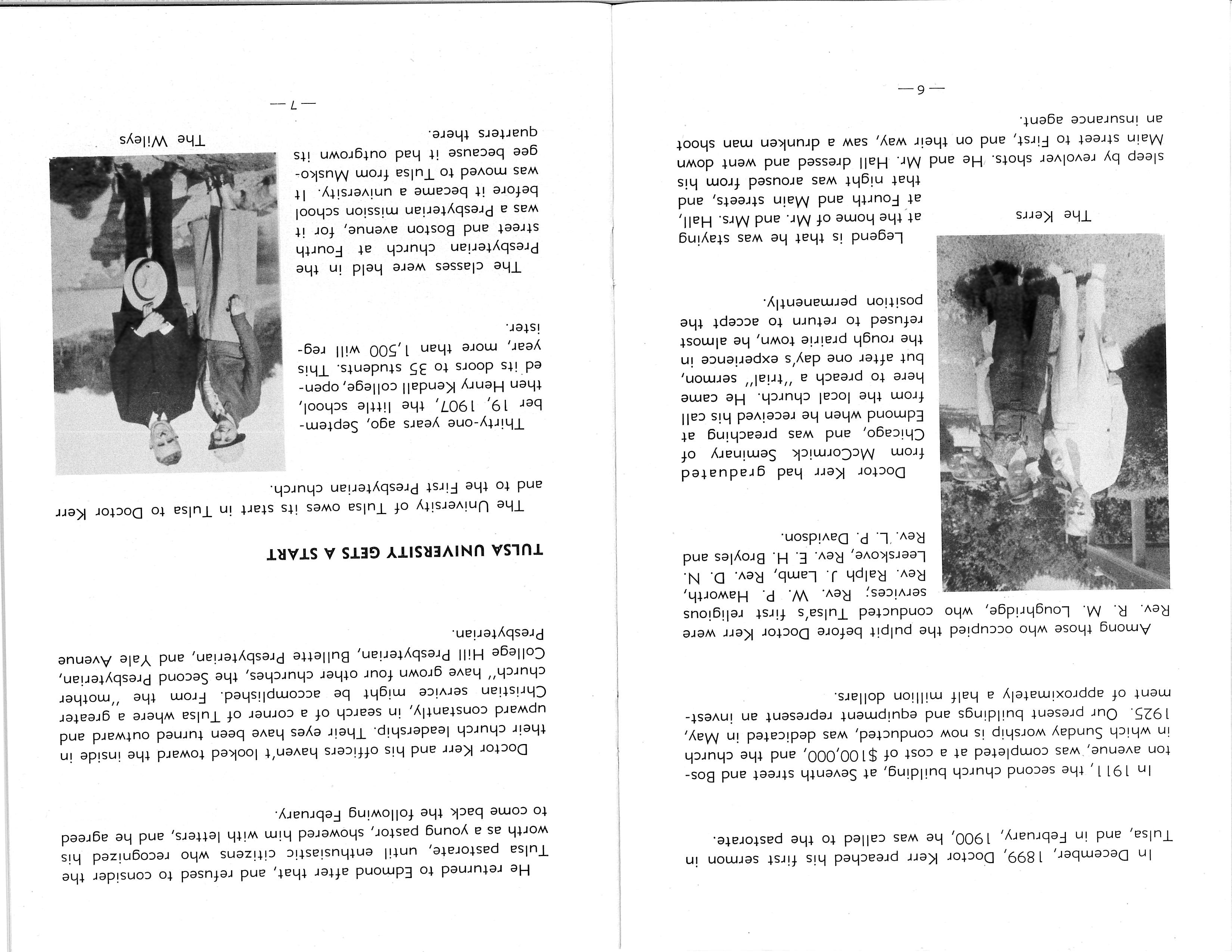 Whether this announcement quelled the riot, or whether the Black people of Greenwood retreated, outnumbered and outgunned, is unclear. On the next day, white rioters moved through the neighborhood, torching 35 blocks. Eyewitness accounts told of an aircraft that flew over Greenwood, and recounted huge explosions, as well as fires visible from miles out.

Both Black Wall Street 100 and Divided Hearts: the Presbyterian Journey Through Oklahoma History (Michael Cassity and Danney Goble, 2009) state that Rev. Kerr opened the basement of First Presbyterian Church to minister to Black Tulsans fleeing the assault, sheltering the homeless. He also ministered to refugees at the fairgrounds, delivering food and clothing. Mrs. Kerr reportedly hid a man being chased by a lynch mob under her sink, and calmly peeled potatoes while the mob futilely searched the house.

Kerr by all accounts remained affronted by the massacre, and the next few months uncovered fissures within his own congregation. First Tulsa considered organizing a mission church in Greenwood, but tabled the idea, noting that “the colored people of this city have so many churches already.” Kerr attempted to get his congregation to support a Congressional inquiry into the massacre; the membership declined. Over the next few years, as the Ku Klux Klan mobilized to ensure that Black Tulsans never recovered the economic prosperity they had prior to 1921, Kerr would be invited several times to join “benevolent associations” or “anti-vice groups”; he would decline. The friends and family of Greenwood’s laundresses, routinely called upon to wash the white robes of the Night Riders, would come to Kerr with Klansmen’s names, among them members of his own congregation.

Even Kerr’s record is tarnished, however. According to the Phoenix Tribune, an African American newspaper in Arizona, Kerr and a number of other Tulsa church leaders gave sermons soon after the massacre blaming the Black community for the death and destruction of Greenwood. According to the Center for Public Secrets, Kerr thought that “successful Blacks” of the kind who built Greenwood “couldn’t expect to be tolerated.”

The Synod of Canadian, the Presbytery, and Prohibition

Racialized violence would remain essentially unaddressed at every level of the Church. The Presbyterian Church in the U.S.A. Synod of Canadian, a middle governing body of and by African Americans spanning Oklahoma and Arkansas, makes no mention of the Tulsa massacre during its meetings in 1921 or 1922. The Synod notably--given the prohibitionist pretexts for violence used by police and vigilantes--approved a report from its Temperance committee urging the Synod “throughout its bounds to put in new strength to the betterment of human society against intemperance.” 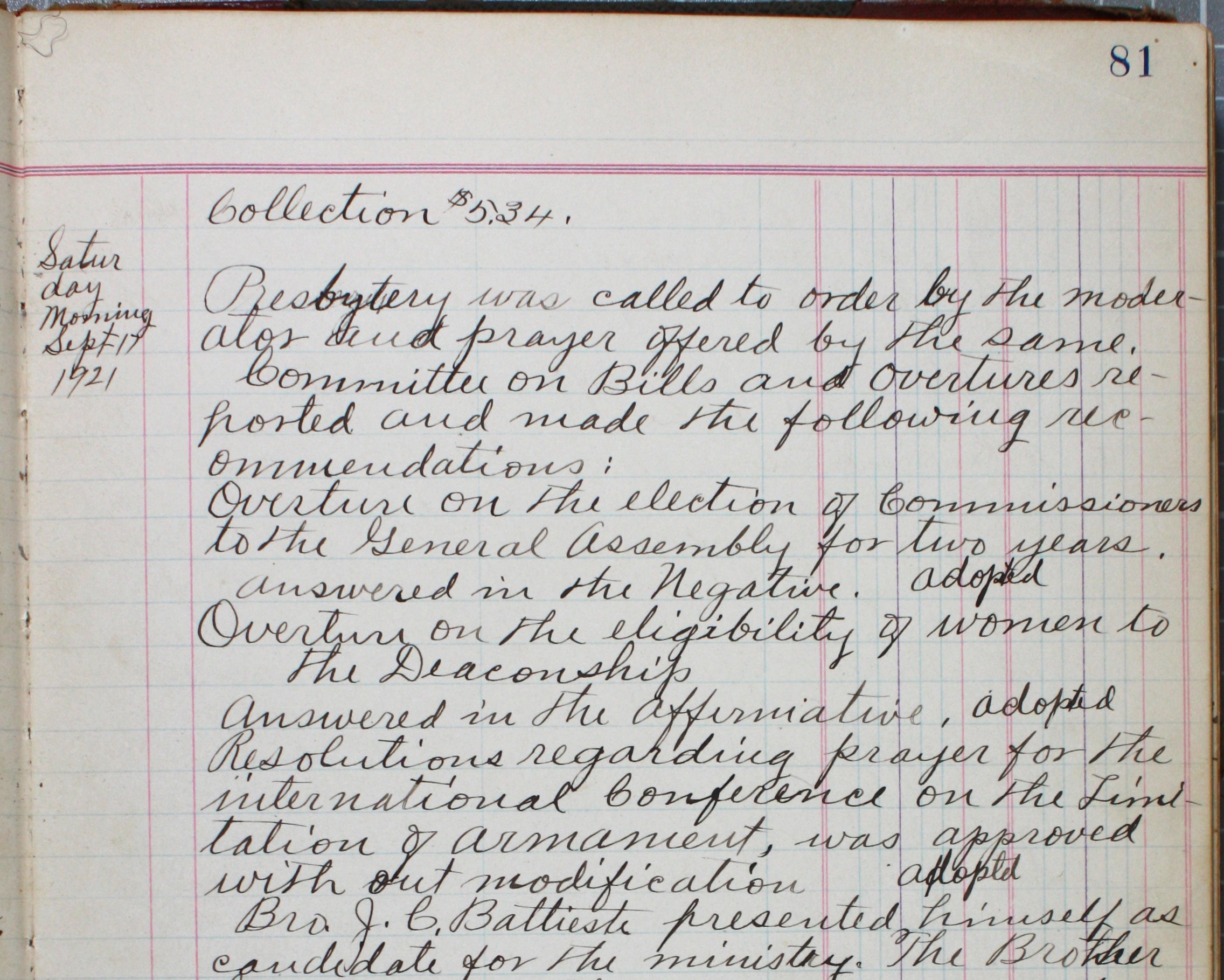 The Presbytery of Kiamichi, another of the Oklahoma all-Black governing bodies, was similarly quiet about the massacre in its records, dedicating time at its next four assemblies to discuss revivals, to support the New Era Movement, and to pray for the success of the International Conference on the Limitation of Armament.

The 1922 PCUSA General Assembly would approve support of the Dyer Anti-Lynching Bill in the Report of the Standing Committee on Freedmen. By the time the General Assembly gathered in Tulsa in 1928, virtually no memory of the massacre seven years prior was present--except for the ride the cameraman took in a Curtiss company aircraft (see main image), possibly the one to have surveilled residents fleeing the assault, or to have dropped improvised incendiaries on Greenwood.

John Rogers, the Ku Klux Klan, and the University of Tulsa

In the wake of the massacre, citing continued vice in Greenwood, the Tulsa sheriff’s office was placed under care of a newly empowered Benevolent Association, which would oversee the hiring of deputies dedicated to clearing out the city’s bars and brothels. The Tulsa Benevolent Association was organized in January 1922 with five trustees, all of them members of the Ku Klux Klan, one of them, John Rogers, a regent of the University of Tulsa and a benefactor of First Presbyterian Church.

John Rogers was lawyer to the Chapmans, one of the richest oil families in the state. He oversaw Chapman family funds which endowed the University of Tulsa and First Presbyterian. In 1943 he would help the University buy out the Wash Hudson School of Law--itself the product of a Klan associate--and in time the school would be named after Rogers. The Rogers family firm continues to administer Chapman trusts, including a fund for First Tulsa. The University of Tulsa moved to rename the law school in 2016. 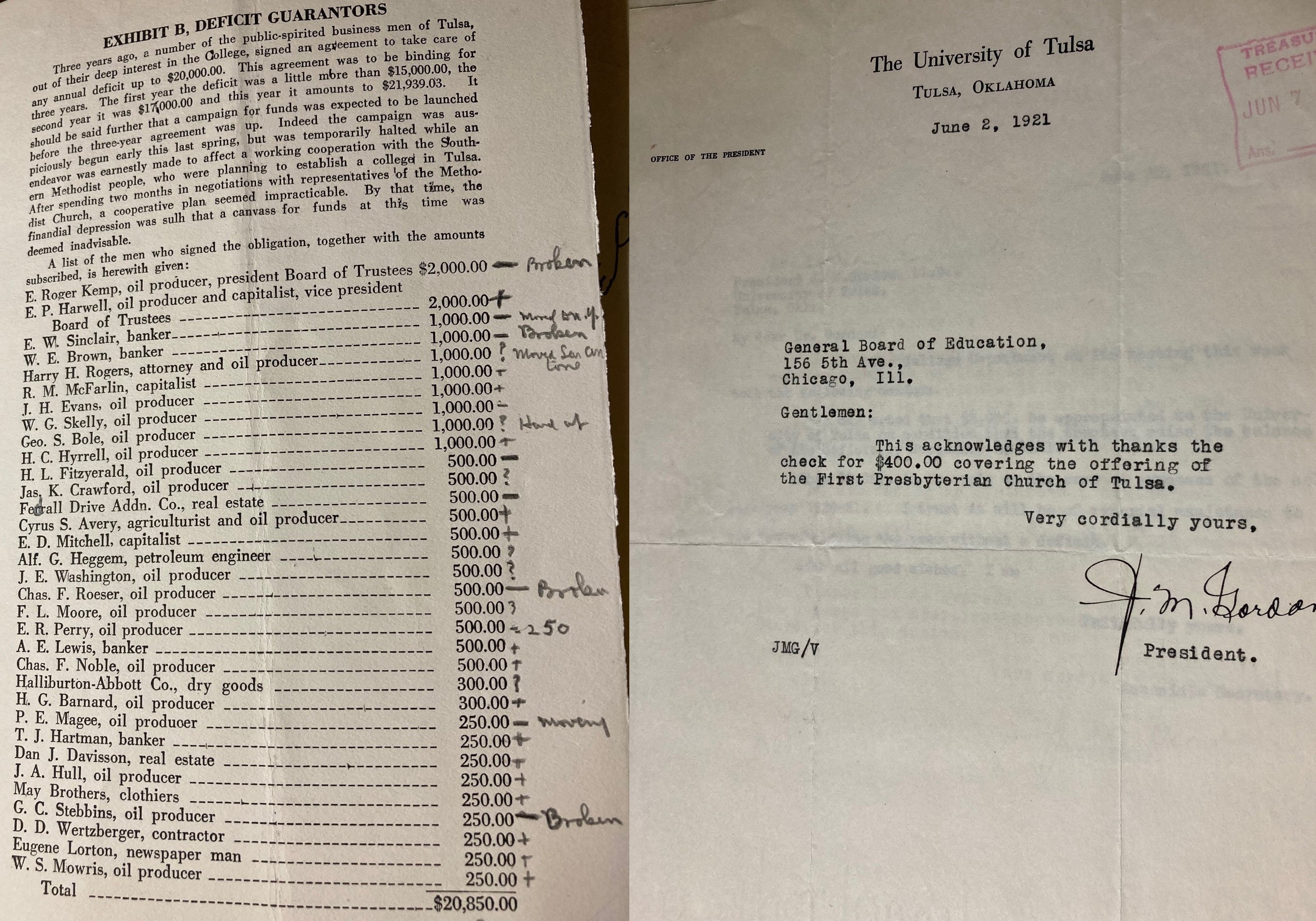 The Tulsa massacre has been the subject of a 2001 inquiry, has been examined by Human Rights Watch, and has spurred a lawsuit against the city by survivors and their families. Presbyterian reckoning with the legacy of racialized violence and police impunity is ongoing. The Stated Clerk's statement on remembering the Tulsa massacre is here.

On Thursday, May 27, 2021, at 6:30 p.m. (CDT), the Synod of the Sun is hosting an online event to commemorate the centennial of the 1921 Tulsa Race Massacre titled Listen & Lament as part of its Network for Dismantling Racism. Dr. Hannibal B. Johnson will be discussing his book, Black Wall Street 100: An American City Grapples With Its Historical Racial Trauma.

The PC(USA) continues to move on multiple calls to undertake racial reconciliation. The co-moderators of the 224th General Assembly are directing Presbyterians to support Restorative Actions, a fund for reparative justice. The Assembly’s Special Committee on Racism Truth and Reconciliation is taking a deep dive through the archives in support of its work. A vast body of resources for further reading is available from PC(USA) Facing Racism. And your archives is doing its small part to support a just society.

--Thanks to Office of the General Assembly colleague Molly Casteel and to PHS colleagues Lisa Jacobson and Fred Tangeman for information used in this blog.