Resources for Self-Study on Racism

The 224th General Assembly in June 2020 passed item 00-29, "On the Church in this moment in history," which called Presbyterians to corporate repentance:

"Repenting, both personally and corporately, for the role we as individuals and as a predominantly White-dominated church played in history and continue to perpetuate today, even if unknowingly, in systemic racism and White Supremacy, especially in terms of our own local silence, silencing those who attempt to speak or act, and our failure to act regarding police brutality, voter suppression, educational and healthcare inequality, and other acts of systemic racism on federal, state, and local levels."

This is a collection of published material presented in aid of PC(USA) congregations, mid councils, and other groups, who have undertaken research in order to repair past action against or inaction for racial justice.

The history working group of First Presbyterian Church (New York, N.Y.) completed its study in 2022, notably finding that between 1784 and 1812 the majority of its elders and trustees were slaveowners. In the 1840s, construction of the present church on Twelfth Street was significantly funded by a loan from of $30,000 from John R. Donnell, a wealthy North Carolina judge and plantation owner.

Old First and Slavery, 2022 by David Staniunas on Scribd

A Racial History of the First Presbyterian Church of Trenton, 2021

Isaac Bledsoe and Juliet Sturge, under the aegis of the RISE (Recognizing Inequities and Standing for Equality) Fellowship sponsored by the Pace at Princeton University examine the ties to slavery among the pastors and other leaders of First Trenton beginning from its creation in the early 1700s.

A Racial History of the First Presbyterian Church of Trenton, 2021 by david_phs on Scribd

After a year of inquiry into their records and those of their downtown Baltimore neighborhood, the session of Light Street Presbyterian Church assess their congregation's actions regarding racial justice, from the pre Civil War period to the 1970s -- when a "blue-collar" white church received its first Black member.

Westminster and the Civil Rights Movement, 2022

Westminster Presbyterian Church (Alexandria, Va.) begins its self-study with the personal model of its pastor Cliff Johnson, a forthright preacher who let his suburban middle-class congregation in on his own struggles to unmake the racism he was bred into.

Forty years ago, following a World Council of Churches convocation on racism, the PC(USA) issued this call to the church to recommit to racial justice.

A broad historical overview of Presbyterian work among racialized communities. "For the colonists and the colonial church, civilization meant a total denial of native American and African cultures and the total acceptance of Euro-Christian cultures."

An audio guide on the "Black, Brown, and Red Power movements" designed for self-study by congregations and presbyteries. Features Jim Forman and Eliezer Risco press appearances in defense of Black Power and Brown Power. Includes Kenneth Neigh of the Board of National Missions arguing against the "Marxism" of these movements. 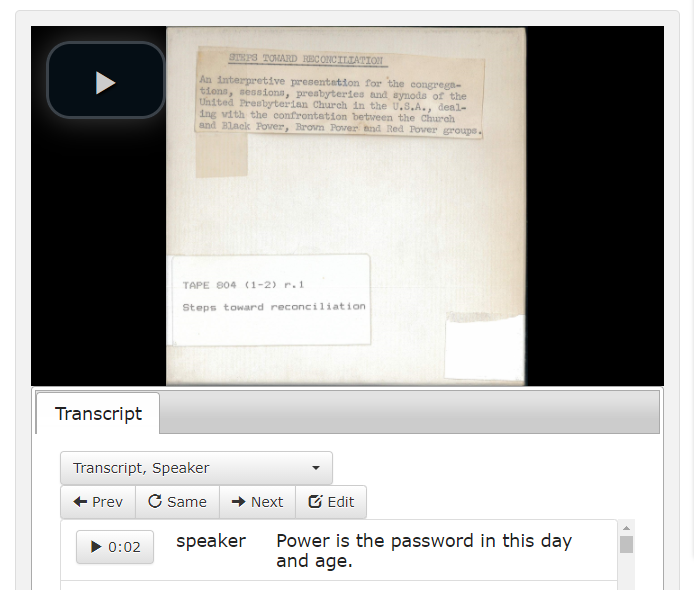 Episode of the WCAU program "Input," on the Black Manifesto, featuring Rev. Carroll Jenkins of Fifth Presbyterian Church (Chester, Pa.), Muhammad Kenyatta of the Black Economic Development Conference, and Dean Lewis of the UPCUSA Office of Church and Society.

A biographical treatment of Appalachia's John Rankin, a born abolitionist. "Born in 1793 near Dandridge in Tennessee, a slave state, John was taught to hate slavery by his mother, Jane Steele Rankin, and those lessons were probably reinforced by Samuel Doak during his tenure at Washington College in Jonesboro."

Judgment of the nations : the kingdom of God versus the United States of America

A Maryland church stages a mock trial of the United States on Thanksgiving Sunday 1975.

"It was left to the radical abolitionists and a few black preachers such as Henry H. Garnet and Henry M. Turner to make the American public aware, before the end of the nineteenth century, that blacks had never been content in their bonds, and that from the beginning of slavery they had made a persistent effort to free themselves." --Chapter 2, Not Peace But The Sword

The history of the Presbyterian Church's all-Black presbyteries and synods, commissioned by the 205th General Assembly (1993)