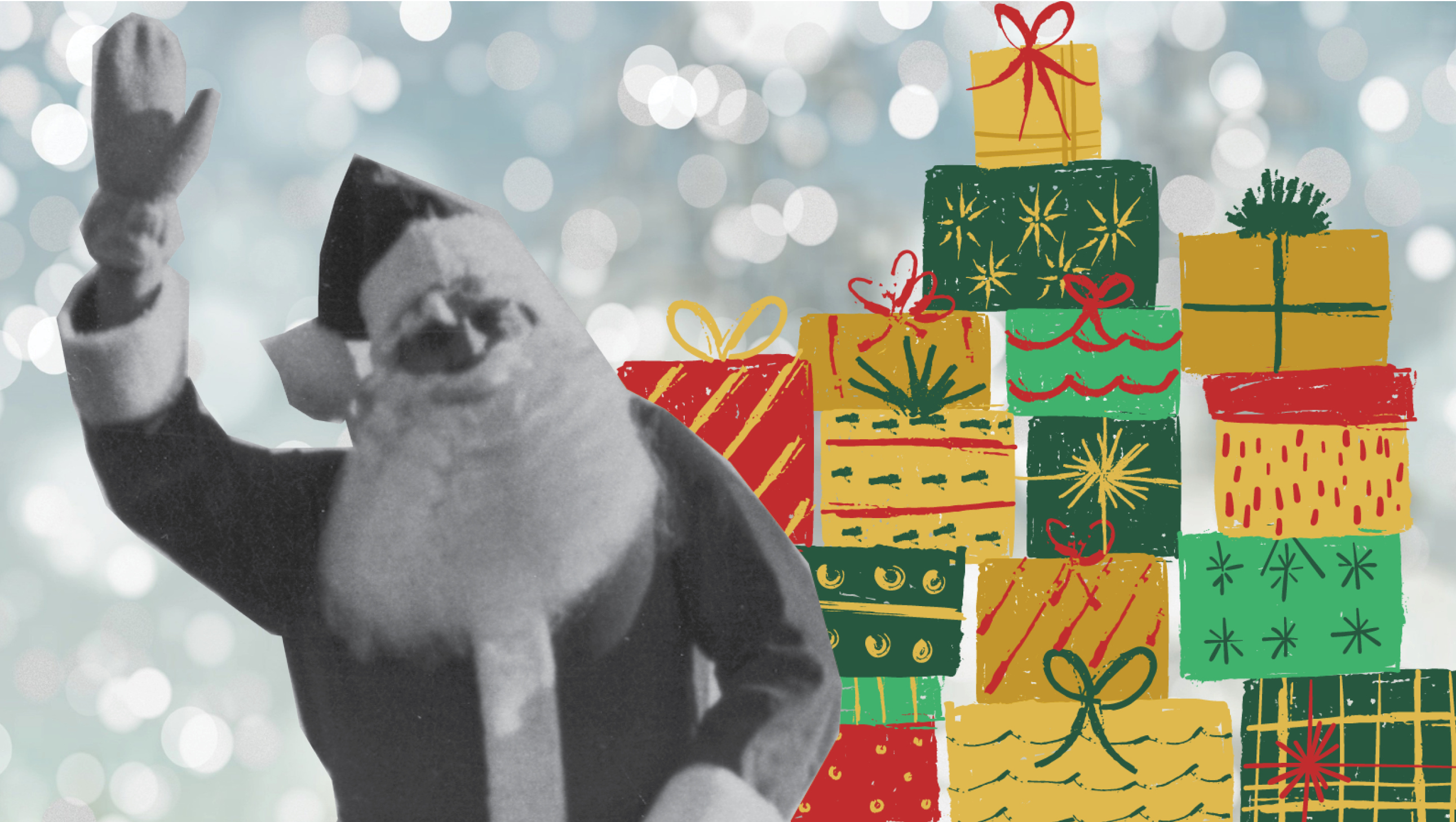 During the chilly month of December, it’s easy to fall into daydreams. Images of warm fires and cozy blankets, and mugs full of mulled cider or eggnog may help you get through the dreary gray days. Or perhaps your thoughts steer you toward childhood memories—of the excitement that rushed through your veins on Christmas morning, of getting your photo taken with your sister and Santa Claus, of picking out the perfect tree for your living room.

Many Christmas memories and traditions revolve around a particular figure, whose jolly laugh and rosy cheeks bring smiles to faces across the globe. This Christmas season, we offer you a few images of Saint Nick himself in the hopes that they brighten your day and set your holiday spirit aflame. 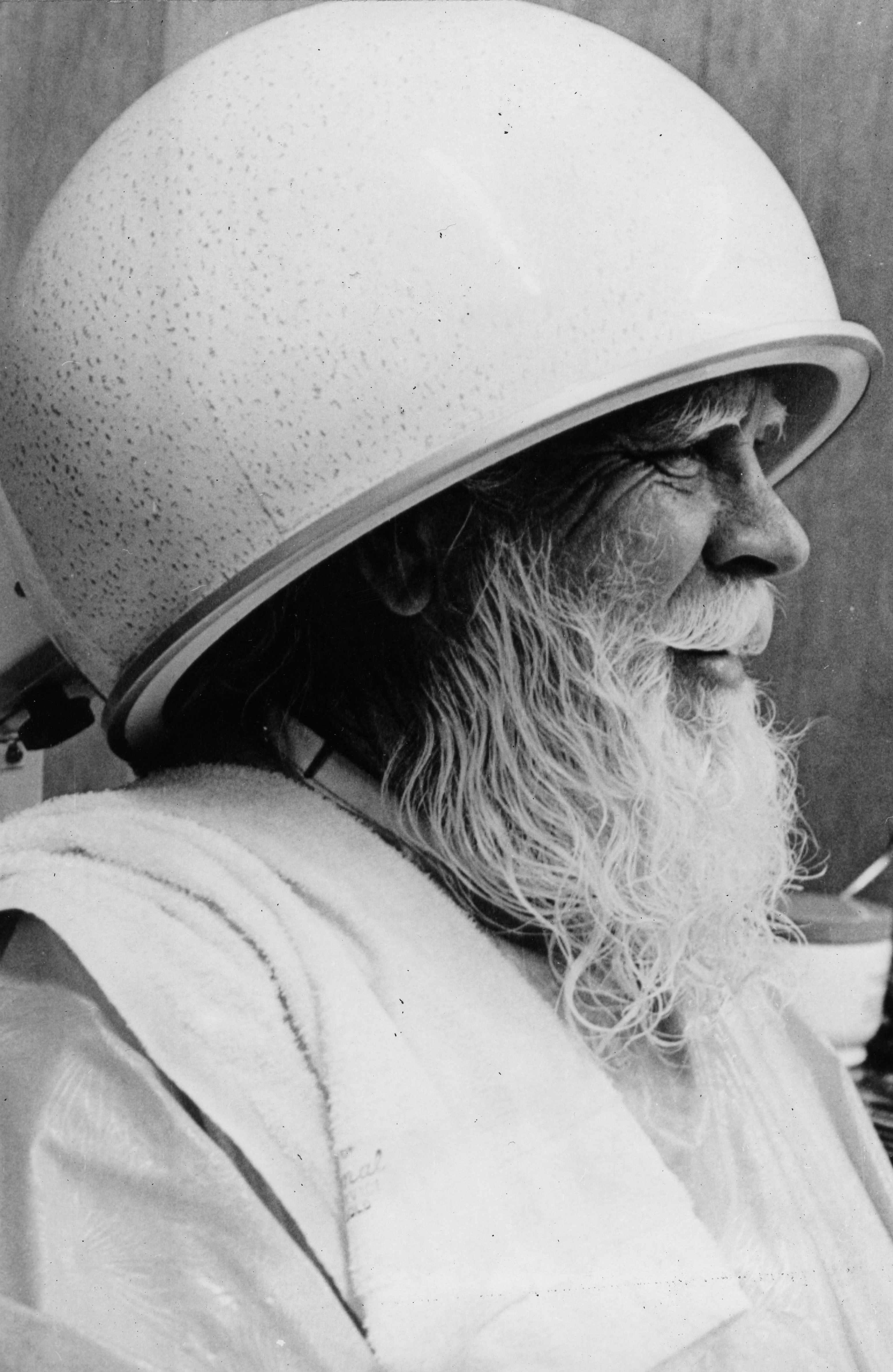 Even Santa needs self-care! Professional Santa Claus—yes, that’s his job title—Jean Apperson is pictured here patiently sitting beneath a hair dryer in 1969. Every week, Apperson had an appointment to get his silvery hair and beard shampooed, bleached, set, and styled. After playing Santa for 31 years, you probably get used to the routine upkeep.

It might be surprising to note that Apperson headed into Denver for his “beauty treatment”—not the North Pole. 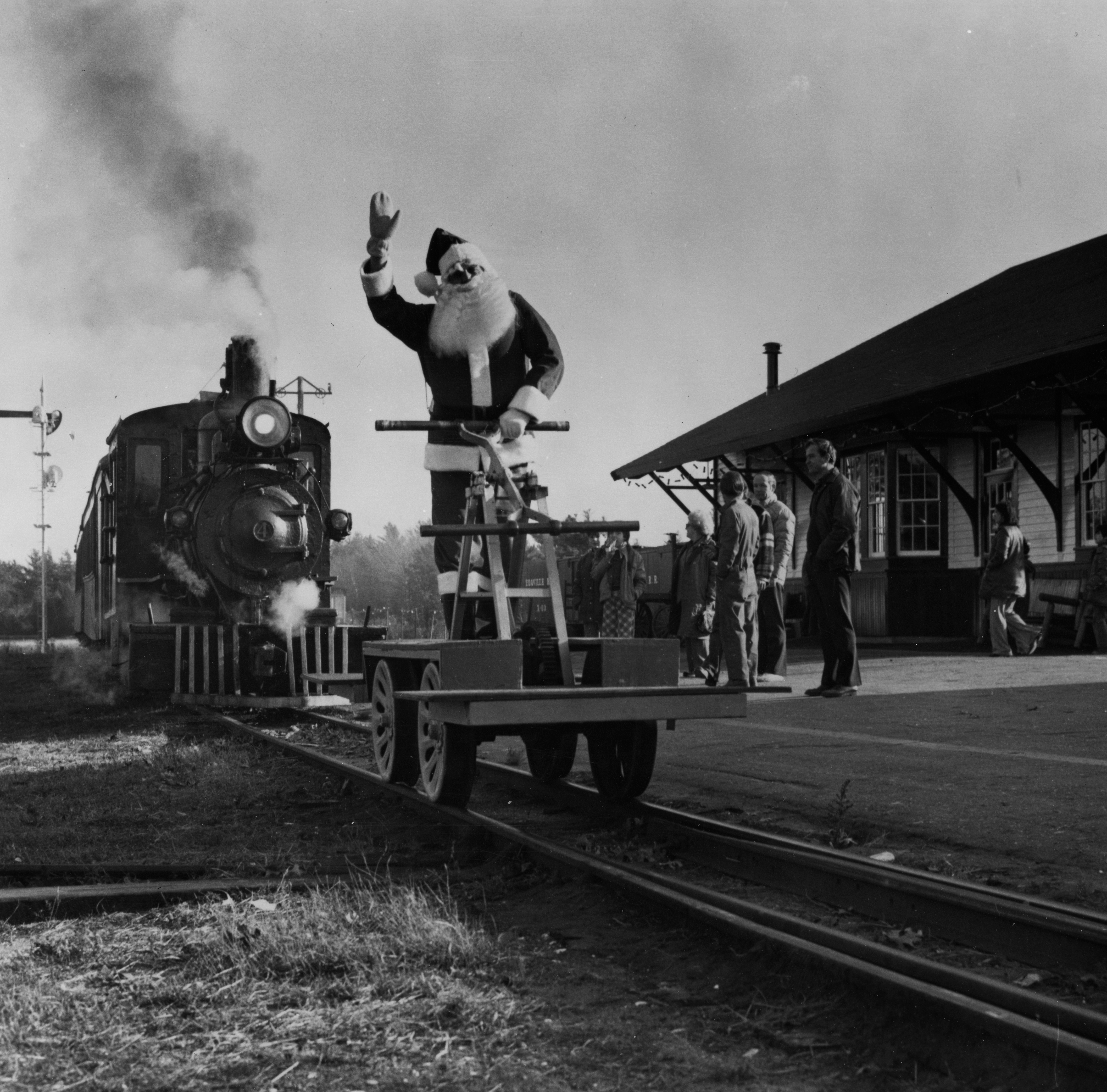 Santa’s got to get around somehow, right? This Santa uses a unique mode of travel to journey from the North Pole all the way to South Carver, Massachusetts. Arriving “under his own steam” while pumping the handles of an old-time handcar, Santa made it just in time—leading the way for the Edaville Railroad’s Christmas Festival special in 1973. 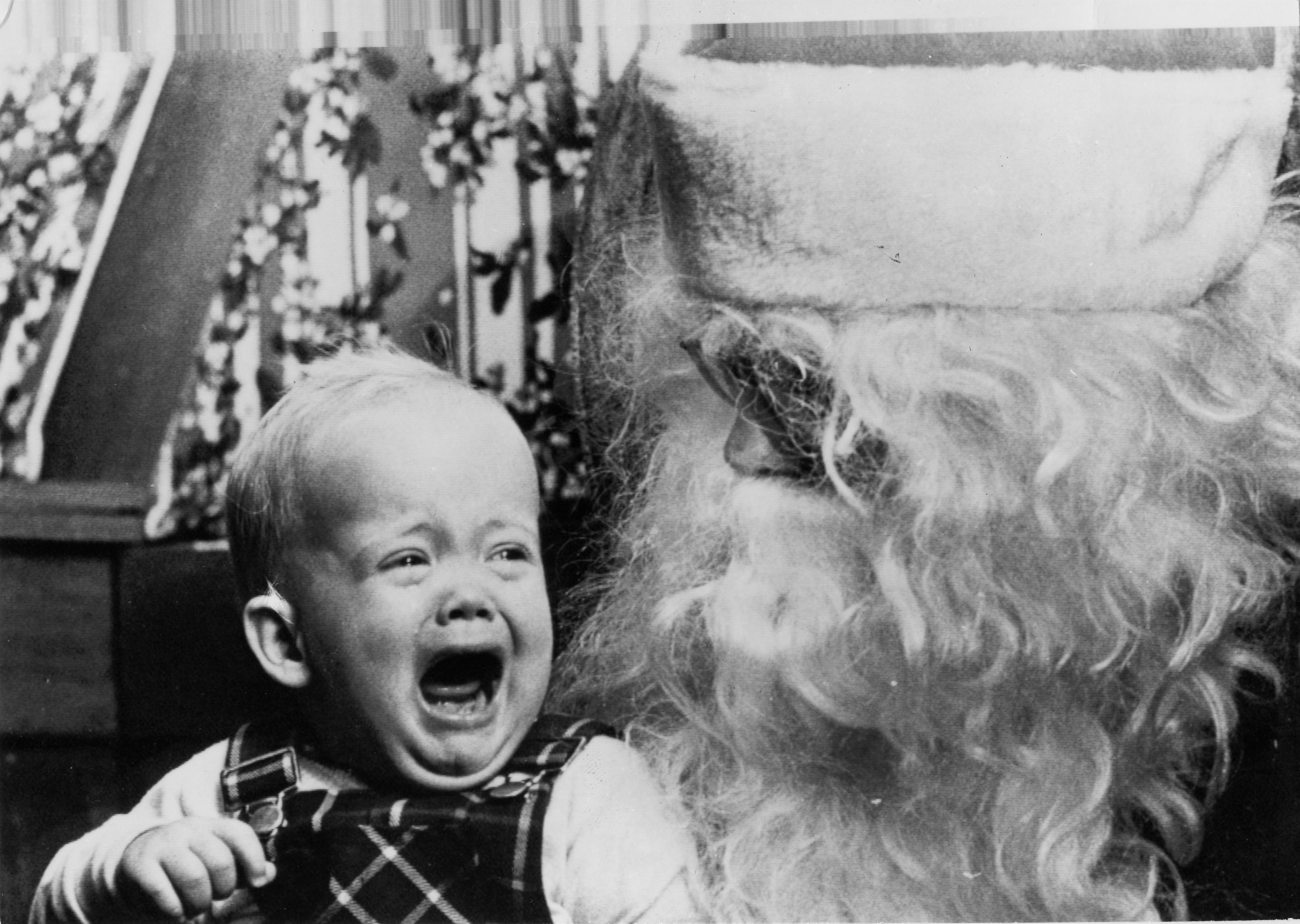 We all have photos like this one—images of a toddler-sized version of us crying while sitting on Santa’s lap. It’s practically a rite of passage! This 1980 photograph captures a toddler visiting Santa for the first time at a Minneapolis shopping center. The caption suggests that the young boy is “reacting to Santa’s abundant whiskers.” 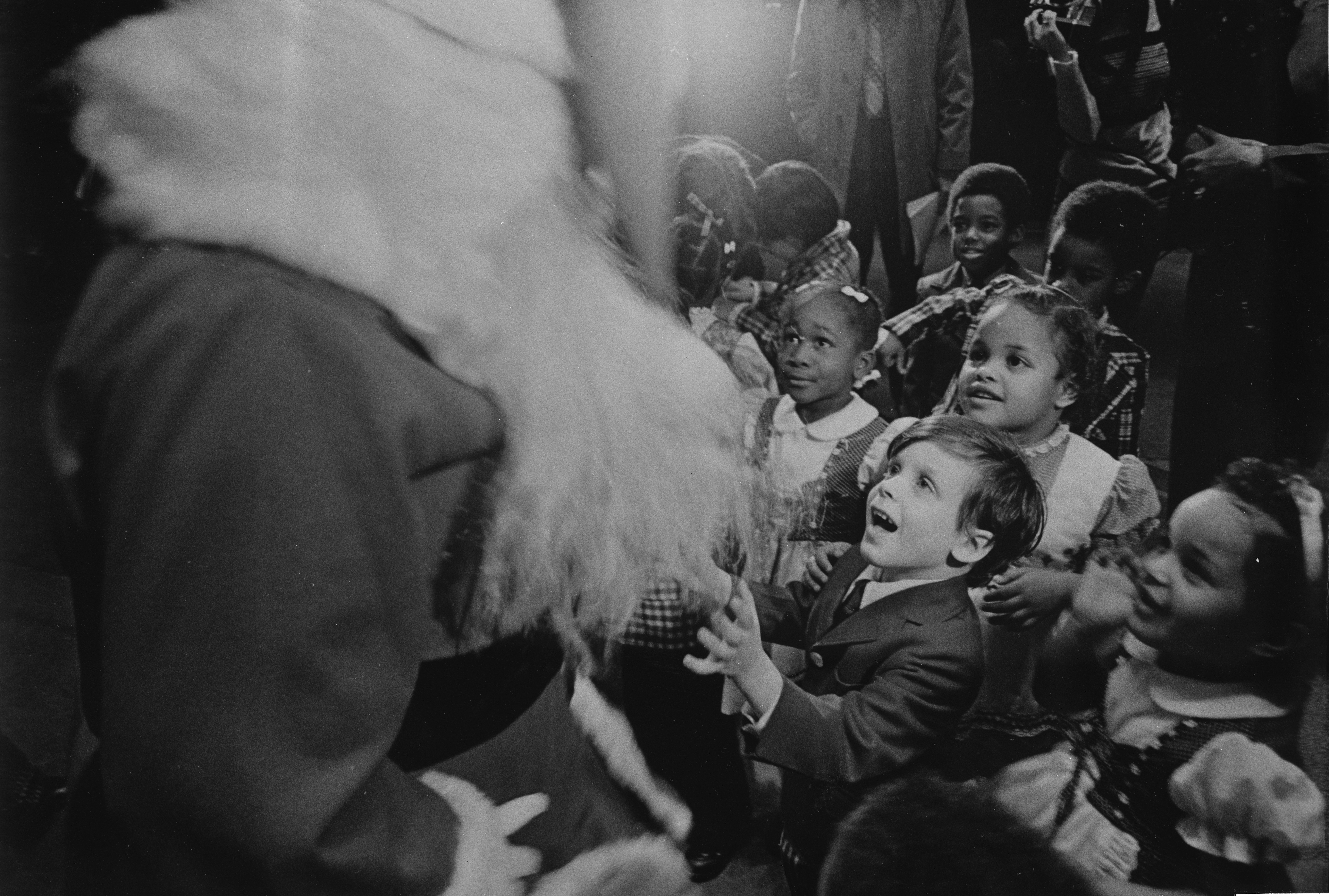 This photograph is from the 1975 fundraising party organized by the New York Catholic archdiocese in support of the New York Foundling Hospital. The guests of honor—the young children of the Hospital—are seen crowding around the annual affair’s other special guest: Saint Nick. Their excitement is contagious. 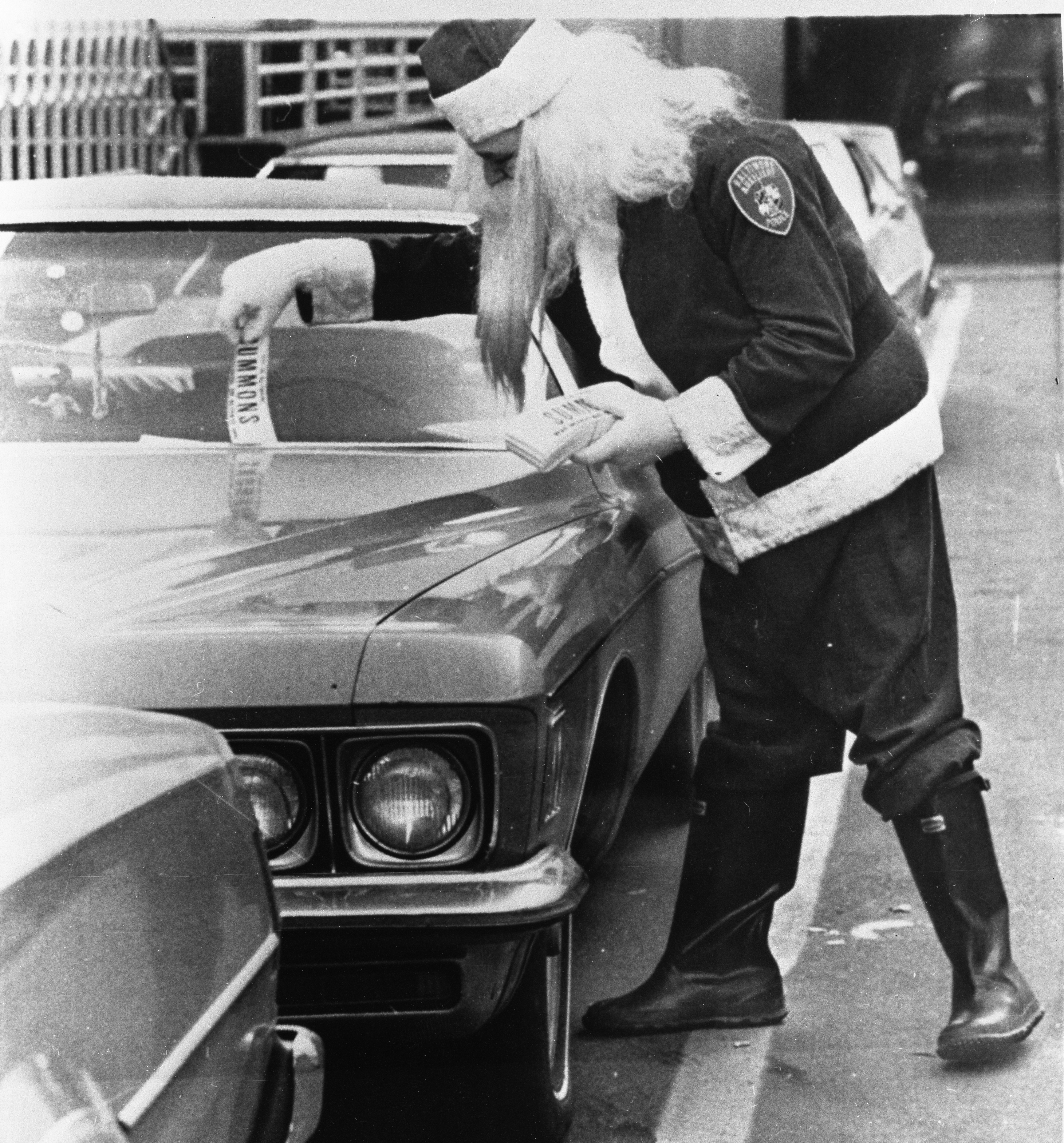 Don’t worry—it’s not a ticket! In 1977, as part of their anti-crime campaign, the Baltimore City Police Department enlisted the help of Father Christmas to place cheery summons on parked cars. There’s no fine involved; rather, the slip of paper is a summons to have a happy holiday, and a reminder to lock the car. Stay safe this holiday season!