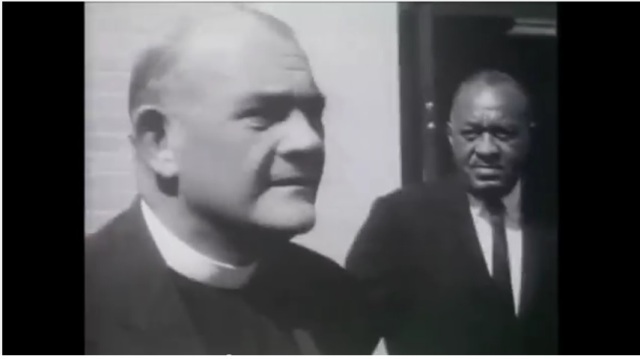 Police were in place to meet the men who meant to go to jail. On July 4, 1963, the stated clerk of the UPCUSA, Eugene Carson Blake, was jailed in Baltimore, Md. for trespassing. Along with 283 activists from the Council on Racial Equality and the Baltimore Clergymen's Interfaith Committee, Blake had challenged the owners of Gwynn Oak Amusement Park to desegregate. The church had cameras rolling, and a 16mm film, with some of Blake's speeches on civil rights dubbed over it, was widely distributed. You can see PHS's copy below.

The march on Gwynn Oak was not Blake's idea. At a press conference the week before, called regarding his appointment as head of the National Council of Churches' Commission on Religion and Race, the veteran reporter George Dugan asked Blake, "Name one thing that you plan to do." Blake, flat-footed, had just heard obliquely about a CORE march in Baltimore, and said he was looking into joining. Marchers and press gathered at Metropolitan Methodist Church, including busloads of activists from Philadelphia and New York, among them Daniel Corrigan, William Sloane Coffin, Jr., and Rabbi Morris Lieberman, who, when asked what he was doing in a Methodist church on a Thursday, replied that every American ought to celebrate Independence Day.

City and county police and private security guards were on hand when the buses pulled up to the main gate of the amusement park. Blake and the African-American Presbyterian elder Furman Templeton planned to approach first. They joked beforehand that they were stumped as to what to do if they both got in: Templeton didn't ride roller coasters, and Blake couldn't handle a ferris wheel. Someone read the demonstrators Maryland's trespass law. Blake approached the gate when the reading was over. According to Robert H. Heinze:

Blake said he wanted to go into the park. The police said, "Go ahead." Blake said, "But I want to go in with my friend, Mr. Templeton, here." Templeton was denied admission. Blake pressed the matter, saying they wanted to ride the miniature Baltimore and Ohio Railroad. The police suggested that what was really wanted was a ride in the paddy wagon. [...] They declined, Blake saying, "You'll have to take us."1

Blake and the others were booked for trespassing, fingerprinted, pleaded not guilty, and were released on bond. Charges against Blake were ultimately dropped. His actions weren't without cost. Many Presbyterians were dismayed by the church's apparent abrupt transition from passive acceptance of civil rights work to active engagement. One wrote to Blake: "I am delighted to learn that you are in jail. If we could keep you there it would be a boon to Christianity. You are a disgrace (that's right) a disgrace to the Presbyterian Church and it makes me ashamed to identify myself as a Presbyterian when we have such a scallywag as you acting as the Chief Executive Officer." Another called him an "apostate," saying, "In your program, having driven our Christ out of the Church, and our Bible out of our schools, the capstone is to be putting the Negro on the roller coaster with our daughters[...]."2