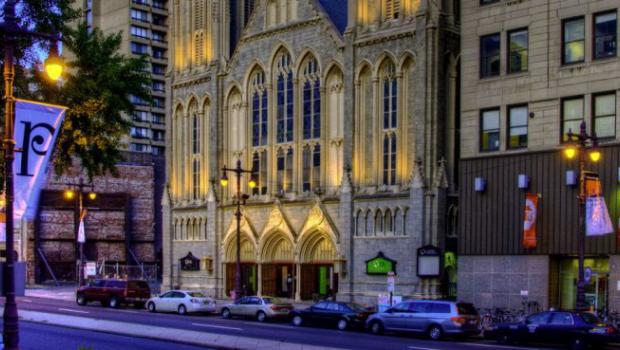 The Chambers-Wylie Memorial Presbyterian Church was the result of a merger in 1897 between the Wylie Memorial Presbyterian Church and the Chambers Church. The Wylie Memorial Presbyterian Church joined the PCUSA in 1885, leaving the Reformed Presbyterian Church in 1868 because of differing views on union, psalmody, and church discipline. Samuel B. Wylie served as pastor of the First Reformed church from 1803 until his death in 1852. His son, T. W. J. Wylie, succeeded him. Chambers Church came out of a controversy between the Ninth Church and the Presbytery of Philadelphia. The congregation called John Chambers as pastor, but in his examination for ordination he refused to give assent to certain teachings of the Westminster Confession of Faith. The Presbytery refused to ordain him, and to approve the call. Chambers went to New England to be ordained by a congregational association in New Haven, Connecticut. When he returned to Philadelphia, a majority of the Ninth members declared themselves independent of the Presbytery and reaffirmed their call to Chambers. They took the name First Independent Church of Philadelphia. Chambers and his congregation returned to the Presbytery of Philadelphia in 1873. The next year the Presbytery elected him as its moderator, bringing a positive conclusion to an outstanding ministry that began in controversy and division.

In 1897 these congregations that flourished separately for more than half a century under the leadership of two distinguished pastors, united as the Chambers-Wylie Memorial Church. The Chambers Church building was sold for $400,000, half of which was used to refurbish the Wylie Church building. The balance became an endowment for the continuing ministry of the consolidated congregation at Broad Street, below Spruce.

In January 2001 this historic church closed its doors. Then in 2005, Broad Street Ministry was formed in the location as an alternative church community. BSM seeks to be dynamic in its expression of worship, embracing those both on the margins of faith and those who have enjoyed the embrace of the church. Broad Street Ministry’s mission is to foster creativity, extend radical hospitality and work for a more just world through civic engagement. This includes a thriving worshipping community, the extension of meals and social services to Philadelphians living in deep poverty, and a commitment to education that bring awareness and action to the intractable issues of poverty, food insecurity, and homelessness facing our city.

It is a joyful celebration of the resurrecting work of God to do such important ministry in a building that would have otherwise sat vacant. The building stands as a testament to God’s faithfulness and the faith of many disciples doing the work of the kingdom at 315 Broad St.