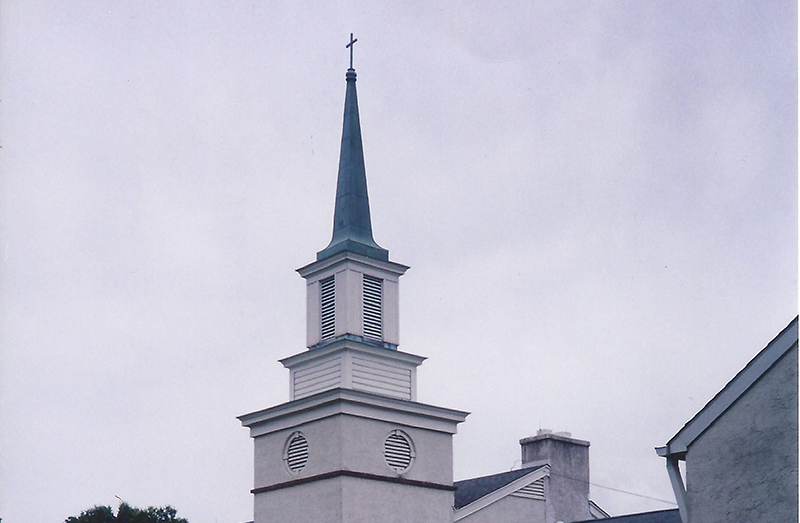 Our church began in 1928 when a Sunday School was organized by the Rev. Dr. Benjamin Gemmill, Pastor of the Presbyterian Church of Neshaminy.  Classes were held in the Warminster School at Madison Avenue and Street Road with teachers coming from Ivyland, Hatboro and Christ Home.  When Dr. Gemmill retired, the Presbytery of Philadelphia supplied the Sunday School with Pastors from the Ivyland Church.

As a building fund provided funds, local men built the church foundation, but, with the Depression it was impossible to continue.

The Rev. Frank Stroup, a student minister, came in 1939 to serve the Sunday School, and was ordained in 1940.  Through his efforts the Presbytery recognized the need for a Church in Warminster and financed a structure for $4300.  The first service was held on September 29, 1940.  In 1941, the session of the Ivyland Church became a provisional session for the Warminster Chapel.  Rev. Stroup left in July 1944 to serve the Church at Flourtown.

From July of 1945, to May of 1948, the Rev. Walter Gray served both Ivyland and Warminster.  William Stackhouse came in the winter of 1948 while still a senior at Princeton and though only serving eight months left a great impact with his dedication.  He introduced the congregation to the Princeton Gospel Teams and old fashioned gospel week-ends.

On June 4, 1950, Warminster Presbyterian Church received its charter and was officially organized with 56 charter members under the leadership of R. Hunter Keen who, at the time, was a student at Princeton Seminary.  The first Elders were ordained that same day, Deacons and Trustees shortly there after.  Mr. Keen was ordained, June 21, 1951, and the congregation issued a call to have him serve as the first full time Pastor.  The rolls grew to approximately 200 and a new Christian Education wing was constructed in 1953.  A chapter of Presbyterian Men was organized, the Ladies Guild and Missionary Society combined to form a Fellowship, and Junior and Senior High Youth groups began.  With much regret the Church gave Rev. Keen his release in 1958 so he could accept a position with National Missions serving the Dakota Indians.

The Rev. Joseph Kuehne, Jr. was called from the Danville Presbyterian Church in 1958.  During his ten years as Pastor, the new sanctuary and social hall were built (1960) and the Church grew in membership from 261 to 609.  Rev. Kuehne spent much time visiting the elderly at Neshaminy Manor, those incarcerated in Bucks County prison, and those in hospitals.  He served his congregation faithfully until his untimely death in 1968.

The Rev. Calvin Uzelmeier, Jr. was called from the Flourtown Church in December of 1968 and served as pastor until he retired in 2002.  Much was accomplished during his tenure.  The house next door was purchased in 1969 and named the Carr Stop in honor of two faithful members. Music became an integral part of our worship services and continues to play a major role in our services today.  The Church Library was organized in 1974.  Our “by faith” stewardship began in 1982, along with sign language interpreting.

The Rev. Dan Clark was called here in 2005 and stayed until his retirement May 1, 2017.  During his time with us our technology was greatly updated with added Live Streaming and monitors in the sanctuary.  At Christmas time we present Bethlehem Village with a live nativity performance, crafts for children in various “shops,” a census is taken, and breads are served.  Also, in front of our church a community tree lighting evening was initiated with the singing of carols and refreshments.  In 2016 The First Presbyterian Church of Willow Grove merged with us and we became The First Presbyterian Church of Warminster.