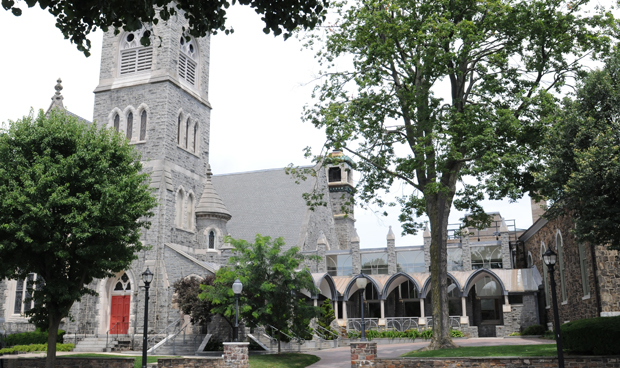 This was the first church that was organized by the new Presbytery of Chester on June 24, 1870.  At the time, Wayne was a small town on the Lancaster Pike, west of Philadelphia close to the boundary line between Chester and Delaware Counties.  It is currently a stop on the Main Line Septa rail system.  The church quickly took root.  Only 20 yrs. after the first church, a newer, larger building was built to house the growing membership.  By 1900 there were 420 members with 332 pupils in Sunday School.  By 1930 the church grew to 876 and reached a height of 3172 members in 1970.  In this period the Sunday School had 1295 pupils. At one time they owned what is now the Wayne Hotel next door but sold it to Presbyterian Homes in order to build an education building which opened in 1960.  In 1998 there was a successful capital campaign to raise funds to connect all the buildings.

The church’s focus is Education, Mission and Music. The music program consists of a 60 member adult choir, 40 member youth choir, 3 children’s choirs, 2 hand bell choirs and a chamber orchestra of 25 members. Since 1948, WPC has been the home of the Wayne Oratorio Society, a community choir that performs major sacred choral works in concert at WPC and is directed by the music director of the church.   Community concerts are held in the sanctuary, most often by Music Transforms, a group committed to benefitting children’s music programs in Southwest Philadelphia.

WPC began a nursery preschool in 1961 which continues today.  The Boy Scouts of pack 284 have called Wayne their home since the 1950s.  Adult Education classes offer a wide variety of classes including parenting, social justice and Biblical studies. Expert lecturers are frequent guests.

The Mission Outreach of the church includes local, national and global mission partners. Wayne Presbyterian Church was one of the founding congregations for Broad Street Ministry in center city.  Since 1995, Wayne has partnered with multiple groups in the Kingsessing area of Philadelphia in a Network partnership called CityLights.  In 2010 with the arrival of our current Sr. Pastor, Rev. Casey Thompson, CityLights laid the groundwork for the church to buy the New Spirit Presbyterian church building (formerly Westminster Presbyterian Church) where mission to the community has continued as The Common Place.  It is a community center focusing on after school enrichment programs for neighborhood children and still is a worshipping space for the New Spirit congregation.

The Saints that have gone before have given members of Wayne Presbyterian Church a spiritual foundation that is expressed in fellowship, commitment to others, and joy.