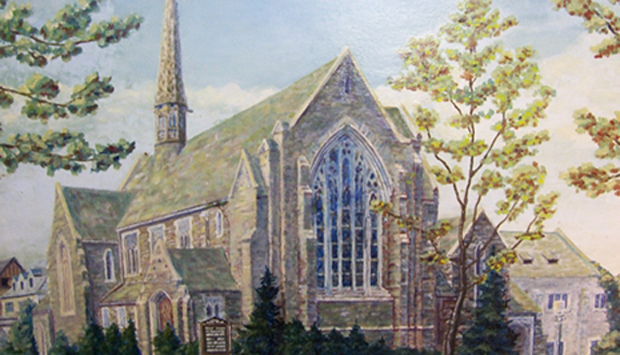 The First Presbyterian Church of Ardmore, Pennsylvania was founded on October 4, 1907 when a group of fifty charter members held its first congregational meeting the Ardmore YMCA building on Lancaster Avenue. Its first minister, the Reverend Edmund G. Rawson, was installed in March of 1908.  The church held its regular worship services and Sunday school at the Ardmore Masonic Hall until 1910, when it moved to its present location on the corner of Montgomery Avenue and Mill Creek Road.  Beginning with the construction of a small chapel, the church gradually expanded to include an 800-seat sanctuary and a large Christian Education complex.  The stone buildings were beautifully designed in the gothic revival style and situated close to Montgomery Avenue just opposite from Suburban Square and the train station, thus becoming a prominent Ardmore landmark.

The church experienced a rapid growth in membership through the 1950s, with a peak membership of over 2,000 in 1970.  Since that time there has been a gradual decline in membership resulting from a change in community demographics and an increasing number of congregations in the area.  The current membership of 350 represents a diversity in background and ages, with children, families and seniors worshiping together as one body.

Throughout the years the church has been faithful in its mission under the leadership of its seven pastors: Dr. Rawson, Dr. Allan Frew, Dr. William Faulds, Dr. Robert Bohl, Dr. David Yeaworth, the Reverend William Proctor and the Reverend James Hodsden.  The church became known for its strong preaching, its active Sunday school, and its mission outreach. Blessed with a beautiful sanctuary with stained glass windows, the church also became known for its reverent worship, characterized by its fine devotional music under the leadership of renowned organists Claribel Thomson, Claire Rozier, and Gary Garletts.

In 2007 the church celebrated its 100th Anniversary with a Century Campaign which included the restoration of the organ, air-conditioning and refurbishment of the chapel and sanctuary, installation of a handicapped-accessible elevator and restroom facilities, and the creation of a drop-off lane on Mill Creek Road.

The First Presbyterian Church continues to be a vital part of the Ardmore community, welcoming new members to its many opportunities for study and service, including mission trips, weekly Sunday school, midweek bible studies, vocal and bell choirs, and weekday preschool.  It looks forward to its second hundred years as it continues in faithful service to Jesus Christ.