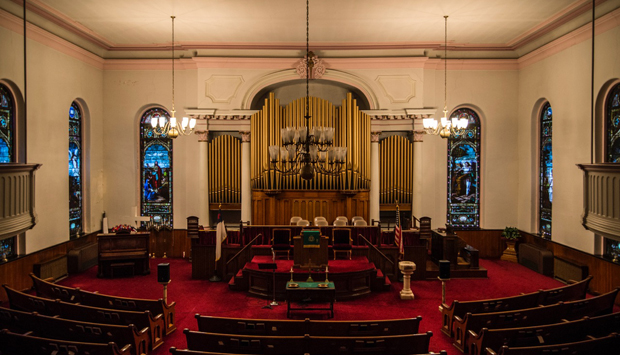 In 1812 a Welsh pastor named Jenkins, began Wednesday evening meetings in his home in Fishtown, the nickname given to Kensington in colonial days because many of its residents were fishermen by trade.  As the number of worshipers increased during Sunday afternoon and evening services, the group moved into a schoolhouse on Queen (Richmond) Street. A lot was purchased on Palmer Street and a church was erected there, by the Evangelical Society of Philadelphia, who then gave this new church to the growing congregation in 1813.  The treasurer of the Evangelical Society at the time was a prominent Presbyterian Elder, Robert Ralston, who was also the President of the Board of Education of the Presbyterian Church, and the founder of the Pennsylvania Bible Society.

On March 23, 1814, the Presbytery of Philadelphia organized the group as The First Presbyterian Church in Kensington. The congregation dedicated its present building on Girard Avenue at Hanover Street in 1859; at a cost of $24,000 the newly constructed church had a 180 feet high steeple, visible by ships passing along with Delaware River.  Just a few months passed in the new church building before the original church’s pastor (since its origin in 1814), the Rev. George Chandler, passed away.  He served the church from 1815-1860.  This was Rev. Chandler’s first and only call.  A statue outside the church still stands in honor of Rev. Chandler’s dedication and ministry to the First Kensington congregation and community.

Unfortunately in 1921 the steeple reached a dangerous condition and was condemned. The steeple was eventually replaced by a copper dome, which today makes the church stand out as a landmark on Girard Avenue. In additional to the dome the sanctuary displays the beautiful stained-glass artwork of William Reith. His process was to add the paint to the surface of the glass, which is in contrast to the more modern process of baking the color in the glass.

At its April, 1865 meeting the Fourth Presbytery of Philadelphia adopted a resolution calling on the First Church of Kensington to consider "forming a new organization or establishing a colony at some suitable place" in light of its membership of 1,100.   In December, 1867, W. T. Eva, resigned as pastor, and with 182 members colonized the Bethesda Presbyterian Church in a meeting hall about a mile away. After several months, the congregation purchased a lot at Frankford Avenue and Vienna Street and erected its building there. The church flourished at this location until 1910, reaching a high in membership of 645 in 1900. After 1910, the membership declined as members moved out and were replaced by newcomers who were not Presbyterian in background. This decline continued for the next 40 years to 131 members and 58 church school pupils in 1950.

Another colony of members from the Kensington, First church established the George Chandler Mission Presbyterian Church, at Cumberland and Cedar Streets, on April 21, 1872. The church's name honored the memory of Kensington's first pastor. "Mission" was dropped from the name in 1874. Shortening the name did not improve the congregation's ability to attract new members to its worship and fellowship. In 1878, Central Presbytery cited the church to appear and show cause why it should not be dissolved. After further review, the Presbytery dissolved the church in January, 1879.

Kensington, First then established another mission at Cumberland and Cedar Streets that Central Presbytery organized on June 13, 1881, as the Cumberland Street Presbyterian Church.  Early in 1883 the name was changed to George Chandler Memorial Presbyterian Church. Once again the name of the revered former pastor of Kensington, First did not attract new members to the church. Presbyterian ministry at this location finally took hold in 1885, when James H. Marr and Francis L. Robbins became co-pastors, and the church's name was changed to Beacon Presbyterian Church. Marr and Robbins inspired the congregation to erect a new church building, and behind it the Chandler Memorial Building for educational and other activities. Then they organized and led a varied program to serve the social, physical and educational needs of the community, in addition to worship services and Sunday school.

As the church continues to minister to the greater Fishtown community 203 years later, it remembers all the faithful who have given of their time and talents to serve the church, as it looks forward to the multitude of those yet to walk through its hallowed doors.  To God be the Glory.