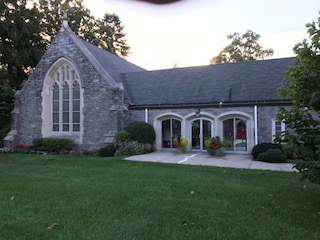 The Wallingford Presbyterian Church might well be likened to that familiar line “the great oak from the little acorn.”  The seed from which this congregation grew was a small Sunday school formed about 1885 that met in the living room of William Eves, located across Providence Road from the Wallingford Elementary School.  When the growing group needed more space, it moved in 1887 to the Briggsville School, a building which was converted to a home and still stands at the corner of Shepherds Lane and Providence Road.

The faith which inspired this little Sunday School was encouraged when Mrs. Matilda Turner donated an acre of ground for a Presbyterian Church.  The cornerstone was laid on June 21, 1888 with Sunday School and worship services being held in it upon its completion on October 6, 1889.  It seated about one hundred, and a curtain across the chancel arch separated the church from the Sunday School room.  Probably everyone sat up front on winter Sundays, as a corner fireplace heated both rooms.  Attendance is reported to have been 30 to 40 adults.  Typical of the times the pulpit was in the center.  Above the arch was the inscription “O Worship the Lord In the Beauty of Holiness”.

The Wallingford Presbyterian Church was organized in September 1891 with 32 charter members.  The Rev. Benjamin T. Jones, D.D. a professor at Lincoln University, who had been chairperson of Presbytery’s committee to organize the church, continued as its stated supply minister until his untimely death in 1893.  At that time, it was felt that the church needed a full-time minister, and so the Rev. Robert M. Labaree, a recent graduate of Princeton Theological Seminary, was called and installed as the first pastor in 1894.

From the very rural character of the township in the late 1800’s, a suburban community gradually developed, with almost explosive growth occurring after 1945 and into the 1960’s.  The church kept pace, with three major building programs in 1929, 1953-54 and 1970-71. These expansions have completed the facility to its present size and configuration.

The Sunday school was the nucleus from which the church started, and a strong church school has been maintained through the years.  Fellowships and organized activities for students and young people were initiated in the form of Christian Endeavor in 1894, which remained active through the 1940's.  Fellowships were begun for Middle and High School students in the 1950's and youth ministry has continued to be a major priority.

Women’s activities, formalized through the organization of a Women’s Missionary Society in 1898, have been an integral part of the church program for many years.  The mission of this group continues to be fellowship, Bible Study and aid to families and children in need locally and nationally.

Recovering from wartime struggles, a Boy Scout troop was organized in 1946 and scouting has been a major activity ever since then, with up to as many as a half dozen boy and girl scout units based here.  Educationally, a cooperative Pre School provides morning activities during the week as it has for over 50 years.

Following Jesus’ encouragement the church has nurtured many Ministers in Training from Princeton Seminary, partnered with six young people from the congregation as they sought the ministry, and welcomed six associate pastors fresh out of seminary who still serve churches in an official capacity today.

Wallingford Presbyterian Church continues to be a beacon in the community located on the corner of Brookhaven and Avondale roads. It is currently shepherded by Pastor François Lacroix and newly called Associate Pastor Taylor Ann Mills.