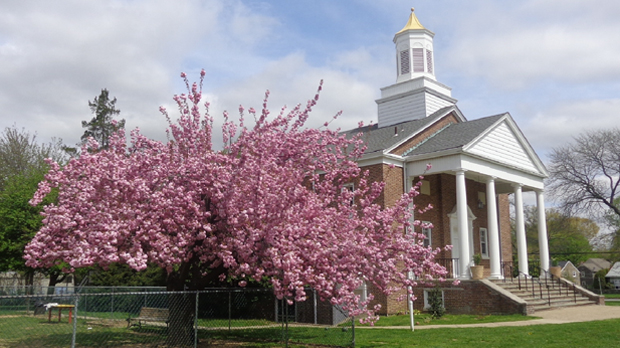 Penn Wynne Presbyterian is descended directly from two out of three of the branches of Presbyterianism that migrated to the colonies from Scotland, the Associate seceders and the main branch. The third, the Covenanter Reformed church is part of us through union. The current congregation is the final result of the merger of Eighth United and Fifth United from the seceder side of the church, and West Hope Presbyterian and Christ Church from the main branch of the church.

The earliest congregation from which Penn Wynne is descended is from the seceder tradition. It is the Scots Presbyterian Church, also called the First Associate Scots Church. In February of 1764 the first pastor, William Marshall began preaching at a hall in Videll’s Alley. In 1770 they purchased land on the south side of Spruce Street between 3rd and 4th and erected a building in 1771-72. John Adams attended the church once in 1777 and wrote a revealing letter about his experience among the congregation of Scots who were “not very genteel” and their imposing pastor, William Marshall, who was a “patriot,” a supporter of the Revolutionary War. When the British occupied Philadelphia in 1777 Hessian troops took over the church building for use as a hospital.

Marshalls’ congregation enjoyed a period of stability before undergoing a further schism in 1845. They left the Associate Church under the leadership of another fiery minister, Rev. Chauncy Webster, forming a tiny short-lived denomination called the Independent Associate Presbytery of Philadelphia with a total of three pastors.

While all of this turmoil was taking place within the congregation, a union between the Associate Church and the Associate Reform Church occurred in 1858. The new denomination was called the United Presbyterian Church. On July 6, 1858, the Session of the now twice schismed congregation asked to be received into this newly formed denomination. It was chartered under the name Eighth United Presbyterian Church. In July of 1859 they called the Rev. W.W. Barr who restored stability and prosperity to the congregation under a long pastorate.  Under his ministry 622 were added to the rolls. The congregation built a new church on 15th and Christian Streets in 1883. That building still exists and is now the home of the Ebenezer Seventh Day Adventist Church.

Barr retired in 1895. The next pastor, Rev. John Hunter Webster, managed to hold the congregation together but unfortunately decline had begun. When Webster left to become a professor at Xenia Theological Seminary in 1908 the congregation was in serious financial trouble. The last called pastor was Rev. Thomas Jamieson. On January 12, 1919, the Eighth United Church with only sixteen members left, formally united with Fifth United Church under the Fifth Church name.

In February of 1854, the congregation met in the basement of their new church while it was still under construction. On the very morning that the congregation was to worship in their new church, tragedy struck. It burned to the ground. The situation was about to get even worse, however. The building was underinsured to the tune of $3000. They rebuilt, but they never seemed to be able to get out of debt from that point forward.

In 1858 the denominational merger between the Associate Church and the Associate Reformed Church led to Third Associate becoming Fifth United, but chronic financial instability continued to plague the congregation. Several attempts at relocation began in 1896. In a huge gamble in 1904 the congregation moved to 56th and Wyalusing with Presbytery help. Miraculously, for a short time, things turned around. They grew. They built a beautiful new church in 1915, now the Camphor United Methodist Church. Membership was at 371. During these years they absorbed the once successful Eighth United. But when the neighborhood changed they could not adapt. Within 13 years of its construction, the building was up for sale.

The final move came in 1944. The new building was to be on Haverford Road in Wynnewood. Fifth United moved to the suburbs bringing a greatly reduced congregation with them. They changed their name informally although not legally to the Wynnewood United Presbyterian Church. The last pastor prior to the final merger in 1975 was Rev. Russell Doherty.

West Hope Presbyterian began as a Sunday School outreach of the First Presbyterian Church of Mantua in West Philadelphia in 1861 called Zion Mission. The first pastor, Rev. Llewellyn Pratt D.D. was pastor for only one year. For a number of years pastorates were short-lived. In 1866, with the war over, they hired a full-time pastor and added a small wing to the main building. In 1862, the congregation received its official charter from the Third Presbytery, New School, and was renamed the Second Presbyterian Church of Mantua.

Mantua was primarily a working-class area in the midst of a post-Civil War recession. The statistical report to Presbytery in 1875 denotes a church membership of 83 and a Sabbath School membership of 280. On June 30, 1871 a new property was offered to the congregation at Preston and Aspen Streets by W.E. Tenbrook Esq. The cornerstone of the new building was laid on November 2, 1874. A controversial and conflicted nine-year ministry followed under Rev. Thompson, (1873—1882).  Fortunately the congregation was able to re-group, and under the ministry of Rev. W. H. McCaughey grew substantially.

On December 19, 1891, an offer was made by John Hope that he would contribute $4000 if the congregation would raise an additional $10,000 for building a new Church.” On May 7, 1892, the corner stone was laid. The name of the church was officially changed from the Second Presbyterian Church of Mantua to West Hope Presbyterian Church, in honor of John Hope.

Rev. McCaughey left in 1900, to be replaced by Dr. Charles Bronson D.D., West Hope’s most beloved pastor. When Bronson arrived in 1900 he had a congregation of 899 and a burden of “a large mortgage indebtedness.” Bronson believed that this debt was “detrimental to the free spiritual work of the Church.” When he arrived the total debt was $34,536.77. Bronson did what no pastor before him managed to do. He convinced the congregation to give. On June 1, 1910, the last payment was made.

During the pastorate of Dr. Bronson by “examination” or by “confession of faith” 1,255 new members were added, and by transfer of letter another 689, making for a grand total of 1,994.

Dr. Bronson resigned for reasons of health in 1922. He was replaced by the highly evangelistic Dr. Howard J. Bell, who navigated the congregation through the crash of Wall Street in 1929. Bell left in 1932. By the time Bell’s pastorate ended, Mantua was increasingly ethnically and racially diverse. Asians, African Americans and Caucasians all lived in the neighborhood.  While the children of the congregation had best friends of other races, churches at the time, including West Hope, continued to be entirely segregated.

McCabe Johnson was installed as the next pastor in 1932. Johnson was blamed, perhaps unfairly, for the church’s decline. When Rev. Philip H. Austin began his ministry on February 21, 1941, membership had fallen far from the heights of 1225 to 360. When Austin left in 1944 the numbers were even lower. Clerk of Session H. LeRoy Parke helped steer the congregation through the crisis and negotiated their eventual merger with Christ Church in Penn Wynne. The West Hope building is now home of the New Bethlehem Baptist Church.

By 1927, the firm of McWilliams and Maloney had laid out most of Penn Wynne’s streets and built the first 200 homes. There was no church in the area, but the pastor of Calvin Presbyterian Church, Dr. Edward Jordan, formed an Organizing Committee. John Williams, a local coal merchant, bought the former company carpenter shop to be converted into a church.

Rev. Walter Bruggeman, began his ministry at the church in the fall of 1936. Early in 1946, Bruggeman resigned in order to join the Navy Chaplains Corps. Rev. Harold Faust was installed as the new pastor on September 12, 1946. With Harold came Amy, and the congregation was blessed with a uniquely talented duo. Amy Deck Faust was an ordained minister who had served as minister of the Unionville Presbyterian Church during the War. She also held a master’s degree in television from Temple University.

The Fausts were up on all the latest technology in television, radio and the creation of promotional literature. They put Christ Church, soon to become Christ-West Hope Church, on the map. Under the Fausts the new building campaign took off. The architect was member Clarence Langzettel. The need for funds was solved in part by the needs of a congregation in West Philadelphia. Trustees Minutes indicate that a joint meeting of the Boards of Trustees of West Hope Church and Christ Church was held on May 12 at West Hope. The decision was made to merge at that time. The “Corner Stone Laying” took place on September 19, 1948, with 300 attending. The new congregation was named Christ West Hope.

The Fausts were followed in 1952 by the popular Rev. J. Milton Bell, who continued a whirlwind style of ministry. At the time of his arrival, the church built by Harold and Amy Faust was large. There were now 24 members of the Deacons Board, two of which were women. There were also 24 members of Session, and two additional honorary members of Session, all male. On January 3, 1960, Rev. Bell announced he was resigning and accepting another call. He was thanked for his seven years of “indefatigable energy.”

Disaster came in the form of their next pastor. Rev. George Laird Hunt arrived in 1960 and left in 1962. His autocratic style, controversial statements and refusal to listen resulted in a direct confrontation with the Session. Presbytery intervention followed. The congregation split. The following pastorates of Rev. Robert Browne and Rev. Don Bitzer did little to halt the decline. By 1973 the church rolls were at 213, with considerably less in actual attendance.  Charles Bridgman, Clerk of Session, began working to unite Christ-West Hope and Wynnewood United under Wynnewood’s pastor, Rev. Russell Doherty, at the Christ-West Hope site. By this point both churches were part of the same denomination. The merger finally took place in 1975. The name was changed to Penn Wynne United Presbyterian, but effectively never used the "United" part and eventually legally dropped it.

The congregation continued to steadily decline numerically under Rev. Doherty’s ministry and under the next pastor, Rev. Jim Horn. When Horn left in 1993 the Presbytery suggested merger or closure. The tiny congregation of 59 members, only 25 of whom were active, refused. They wanted one last chance. In September of 1995 they called their first woman minister, the Rev. Lisa C. Farrell. The decline stopped, but the rebuilding progress has been slow. It is always easier to destroy than it is to build.

The make-up of the current congregation is the most diverse in the church’s history. It is now a multi-racial, multi-ethnic congregation. It has moved from theologically conservative to theologically progressive and now welcomes LGBTQ members. There is an active Youth Fellowship, and a Sunday School, small group bible studies and neighborhood outreach events.