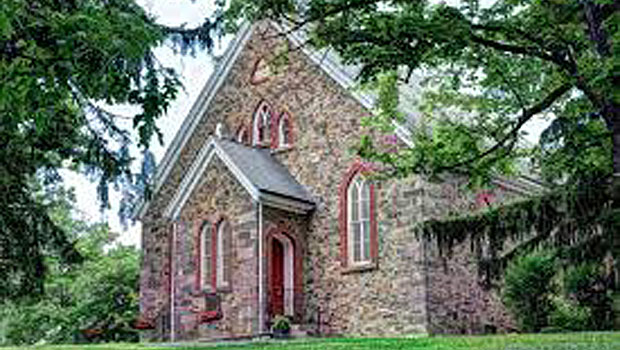 At its October 20, 1812 meeting the Presbytery approved the application of the Solebury congregation to be received under its care and organized it as the Presbyterian Church of Solebury. The service of organization took place in April, 1813. Among its first members were some who transferred from the Newtown Church because Solebury was nearer their homes. The church name was changed to Thompson Memorial Presbyterian Church in 1875, in connection with the dedication of a new building erected by William Neely Thompson in memory of his father, Thomas M. Thompson, one of the founders of the church.

The congregation erected a chapel in nearby New Hope in 1875, that later became the New Hope Presbyterian Church.

For 150 years Thompson Memorial was a rural church, surrounded by farms. By 1960, nearby New Hope was an exurb of New York and Philadelphia. Membership doubled as residential development of former farmland took place, but was still a modest 323 in 1990.

Thompson Memorial Presbyterian Church continues to serve the Lord Jesus Christ with great energy, love and imagination. Our mission statement, adopted in 2002, states, “We are a joyful family called by God through Jesus Christ and empowered by the Holy Spirit to: welcome all, share our faith, love each other, serve the world, and glorify God.”

In 2009 the congregation completed a major renovation of the Educational Building to accommodate recent growth and to expand our mission footprint in our community. For more than a decade the church offer an innovative fine arts summer program called Marcia’s Music and Arts Camp. From the late 1990’s to 2004 Thompson staff and members supported a Christian coffeehouse called the Deep End Café that served youth and young adults from New Hope and Lambertville communities. In 2010, the church began a partnership with Urban Promise Trenton. We have sent mission teams across the northeastern United States and to Guatemala and Mexico City.