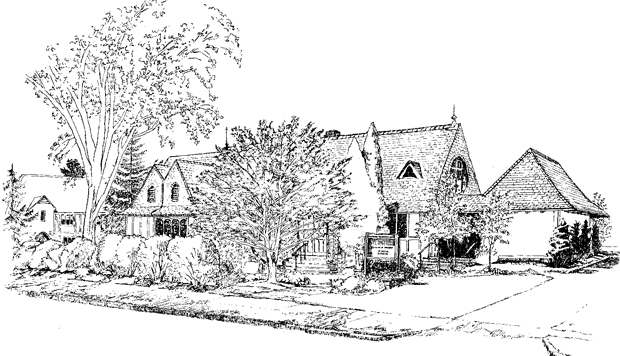 Established 1895 in the late 19th century, Swarthmore Borough was part of Springfield Township. Swarthmore College had been established in 1852. The area was attractive to Philadelphians and others as a summer place, and the train service at what was called Westdale Station made access easier for college people, visitors and the growing number of residents. Although Chester Road and Yale Avenue were the main dirt roads, other streets were being laid out for home development, and the population was slowly growing.

In 1889 the only place of worship was the Friends Meeting on the college campus. In that year, several residents who attended church in Media held a meeting, hoping to establish religious services closer to home. As a result, the Union church came into being, presided over by a Methodist minister who was associated with the college.

By 1894 this church seemed to have served its purpose. As the town and population were growing, the first stirring for division began with the Episcopalians and followed soon after by the Methodists. The Presbyterians, the last to leave, petitioned the Chester Presbytery to help them organize a church. On November 16, 1895, a committee appointed by the Presbytery met with 24 charter members and laid the groundwork for the congregation. The initial service was on the first Sunday in December with fifty people present at The Strath Haven Inn.

On January 16, 1896, the charter for Swarthmore Presbyterian Church was read, adopted and voted to be filed at the Delaware County Courthouse. In spite of the money panic of 1890-1893 and a low stock market in 1895, the members had the faith and determination to undertake the building of a church. The selected design was modeled after a chapel in Brittany with a corner bell tower and seating for 243 people. While the church was being built in 1896, the church membership grew rapidly. Although there were only 100 voters in the Borough, there were eighty church members by the end of the year.

In 1903 the first of many construction projects began to enlarge the building. Classrooms, meeting spaces, Fellowship Hall and a Memorial Garden have been added to and refined over the years. The recent renovation of the sanctuary enhanced the worship experience with a new organ, improved acoustics and chancel reconfiguration. Membership is now over 700.

Excerpted from “A History of the Swarthmore Presbyterian Church” written by Ruth Crissey, Church Archivist, on the occasion of SPC’s Centennial in 1995.