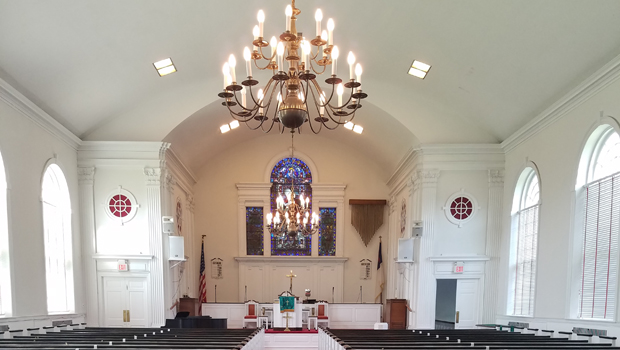 The Oxford Presbyterian Church was organized on January 20, 1867 by the fourth Presbytery of Philadelphia and was incorporated by decree of the Supreme Court of The Commonwealth Of Pennsylvania on March 11, 1867.

The nucleus of this assembly was the members of the 1853 Calvary Church who began a Sunday school on the second floor of a store at Eleventh Street and Columbia Avenue early in 1856. The school soon outgrew this place, and moved to the Wagner Institute at the intersection of Seventeenth Street and Columbia Avenue. The preached Word was included in the program and the community’s enthusiastic response led Matthias Baldwin and others to purchase a site at Broad and Oxford Streets where they built a Chapel. An impressive church building was added and dedicated in 1869. However, Oxford membership began to decline during and just after World War I in the face of racial change in the area. This trend continued for the next twenty years.

In 1943, the congregation of Bethlehem Presbyterian Church rejected a proposed merger with Oxford, and in the spring of 1945 the Presbytery of Philadelphia permitted the Oxford Church to relocate to Stenton and Gowen Avenues in Mt. Airy, where a six and one-half acres plot of land was purchased. This plot bordered Stenton Avenue to Ivy Hill Road to Mansfield Avenue to Gowen Avenue.

Work in the new community was difficult, but with each passing year there has been a stronger bonding between the Oxford family and Community. We are grateful for the many blessings of the Holy Spirit and the faithfulness of our pastors, leaders and congregation.

Oxford Presbyterian Church is in the East Mount Airy section of Philadelphia on the fringe of the city limits about a quarter of a mile from Chestnut Hill, a suburb of Philadelphia. There are five other Presbyterian Congregations less than two miles from each other.  There are six other nearby churches from other denominations.

Over the ONE HUNDRED AND FIFTY years the Oxford Church has been in service it has had ten excellent male ministers. We would be remiss not to give honorable mention to these men of God, who faithfully labored in the field for Jesus the Christ. Space would not permit documentation of their many gifts and the way each minister working hand in hand with Elders, Deacons and Trustees had served the congregation and community.

The Pastors serving the Bethel Church before the merger were:

As dawn follows the night, through the leading of the Holy Spirit the people chose another Pastor and Leader. On October1, 1992 the Session of Oxford after many days and nights of prayers and discussions elected to have Pastor Ethelyn R. Taylor as our “Student Pastor”.

Pastor Taylor, as she is fondly called, challenged the leadership and congregation to approach ministry in a unique way. This resulted in an unprecedented burst of energy. Many ministries and task groups were created to be of service to the congregation and community.

On October 30, 1994, the Presbytery of Philadelphia ordained and installed Oxford’s first female pastor, the Reverend Ethelyn R. Taylor, a native of Philadelphia. At the end of 1994 our active membership stood at 70, with Church school enrollment at 41, and the average attendance at Sunday worship at 65. Three years later (1997), the active membership of Oxford was 137, with a Church school enrollment of 59, and an average worship attendance of 105. To date, the membership stands at 165 and is on the upward move, with an average attendance of 130 at Sunday worship services.

Definite growth and renewal have occurred in the following areas over the last five years:

6. The Youth and Young Adults

The spiritual and renewal growth is due to the worship services, biblical preaching, worship music that is all-inclusive, a warm congregation and committed elders, deacons and trustees. The four priority areas over the few years have been and will continue to be, Christian Education, Evangelism, Stewardship and Youth. Several of our youth who were active in 1994 have gone on to college and retooling of the youth ministry is top priority.

The Oxford church has become known in the Philadelphia Presbytery as “the fastest growing church” in our presbytery. But where did it all start? An elder took the risk on August 25, 1992 to be a servant leader of a team she did not know and of a congregation that was not sure if her paycheck would be in the mail. However, she had much love to offer, and out of that love a miracle occurred. That servant leader is The Reverend Ethelyn R. Taylor. As a congregation, we have been blessed beyond our fondest hopes by her faithfulness to Jesus Christ, who portrays the innovative ideas, the understanding of and love for people through His servant, Reverend Taylor.

This is the brief story we have been compelled to tell, not to glorify this particular church, but to rejoice in our Lord’s faithfulness, and to share our passionate conviction that He is far more eager to bring us new life.

Let us continue to praise Him while we serve, pray and wait.