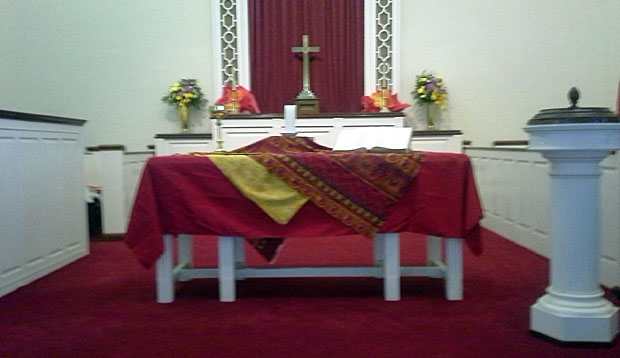 According to an early history of this church, a lot in the development tract called "Westminster," was set apart by the owners and offered free to any evangelical denomination that would establish a congregation there. The first group to claim it built a small chapel and began Protestant Episcopal services there in 1853, but discontinued the mission several months later. In October, 1855, the Presbytery of Philadelphia organized a congregation there that chose the name Lexington Street Presbyterian Church because of its location. The elders elected at the time of organization declined the office, so the official organization took place in April, 1858, when new elders were elected and ordained. In the meantime the frame building on Lexington Street was moved to a new site at Powelton and Saunders Avenues, donated by Mrs. Sarah Miller of Princeton, New Jersey, in March, 1857. The church's name, no longer appropriate at its new location, was changed to Princeton Presbyterian Church in September, 1858. When the congregation outgrew the chapel, services were moved to the West Philadelphia Institute (later, Presbyterian Hospital), until a larger building replaced it.

Declining membership, the increase of African-American residents in the parish area, and plans for the expansion of Presbyterian Hospital combined to lead the Princeton Church officers to consider relocation. In June, 1953, the Presbytery approved the sale of the church property to the Hospital.  A few months later, the Presbytery authorized the Trustees of the Presbytery to convey a site in Springfield, Delaware County, at Baltimore Pike and Church Road to the Princeton Church. The Trustees had purchased the site in 1950 for a future new church development. Instead, Princeton’s relocation there was an old church redevelopment that accomplished the same purpose.

The Princeton Presbyterian Church relocated from Powelton and Saunders Avenues in West Philadelphia to Baltimore Pike and Church Road in Springfield in June, 1953. By 1960 membership almost doubled from the 308 reported in 1950 at its city location to 580, and the Sunday school enrollment increased from 61 to 335. Membership continued at the same level through 1970, but the church school reported 118 pupils, half of the 1960 enrollment. This was a factor in the further membership loss to 479 in 1980, and to 245 in 1990. In both these reporting periods the Sunday school reported 69 pupils.

While membership continued to decline in the first part of the early 21st century, Princeton remained an active and energetic congregation, engaging in hands-on local mission.  In 2009, Princeton began a shared ministry with Chambers Memorial Presbyterian Church in Rutledge, sharing a pastor, music director and choir as well as fellowship and mission.  The shared ministry ended in 2016.  During the last years of the shared ministry, working with Chambers, Princeton developed a new vision for ministry which included a mission to people with disabilities and their families.  This mission included a weekly coffeehouse for people with disabilities and their families and a worship service designed to be inclusive of all.

This new vision was such that the Princeton session felt that they were becoming a new church.  It was appropriate to adopt a new name. In March 2017, the congregation voted to adopt the name Tree of Life Church.  The name indicates the church’s understanding of itself as a growing, diverse organism joined together in Christ, rooted and grounded in God’s love.