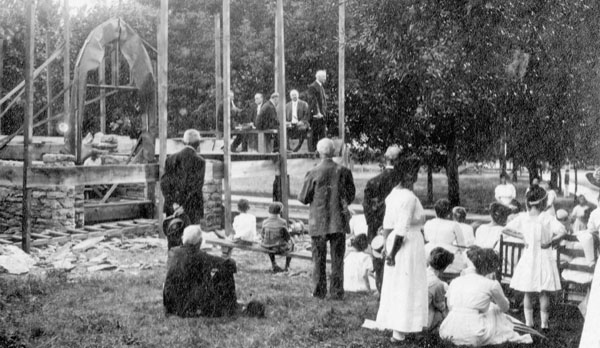 Chester Presbytery organized the Presbyterian Church of Llanerch at Lansdowne Avenue and Park Road in Havertown on May 10, 1909. The church established its ministry in a home in a new neighborhood and grew with it, reporting 472 members and 473 in its Sunday school in 1930. The original church building was completed in 1912 and was added to in 1921 and 1958 with the completion of the Westminster building to house the Sunday School and Preschool. At one time almost a quarter of all the residents in the neighborhood were members of the church. Emphasis in ministry during this period was on Christian Education for children and adults. A Vacation Bible School ran in the summer in cooperation with other neighborhood church, St. Andrews United Methodist. Membership continued to climb to a high of 761 in 1960, with the construction of a new elementary school nearby and then began to decline during the later decades of the 20th century. The population of the township as a whole stabilized and has gradually declined since 1970. Older people outnumber young families, changing the role of the church in its setting.

Llanerch Presbyterian celebrated its centennial in 2009 and since that time has been involved a process of discernment about its future in the 21st Century as a much smaller church but one with an outward directed mission and intentional involvement in the community. In our century of ministry, we have had 7 installed pastors and an even smaller number of music ministers. We maintain a traditional style of music and worship, prizing the contributions of dedicated musicians in the congregation. We have a special mission to children: We sponsor a preschool for neighborhood children, a Cub Scout pack, a Boy Scout troop, and a Venturing Crew. In 1992 we revived the tradition of the Vacation Bible School and have continued to share our spirit with hundreds of children over the years. We also have a special heart to help those hurting and in need. In partnership with other churches, we minister to others in our region by our service to the disadvantaged and homeless in Delaware County’s homeless shelter for adults and several similar programs through the year. We use our building to help meet the needs of several self-help and support groups. We treasure the young people of the church who have grown up to serve the community as teachers, healers, peacemakers, artists, scientists, active in business and society.