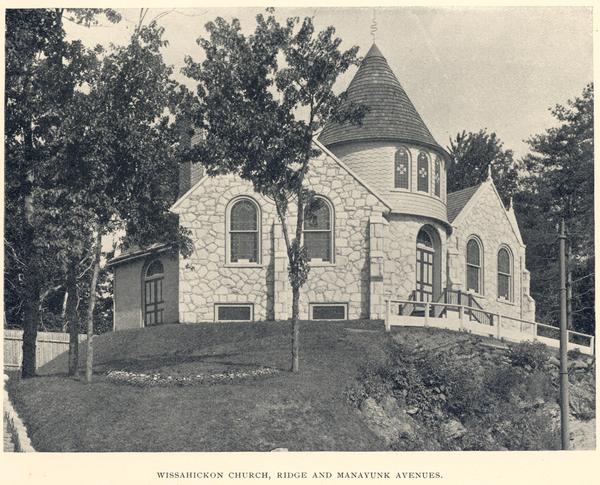 The Presbytery of Philadelphia North approved the establishment of a mission in Wissahickon, under the supervision of the pastors of the Manayunk, Falls of Schuylkill, Leverington and Roxborough churches, early in 1892. The response to the weekly worship and Sunday school was so encouraging that a site was purchased at Manayunk and Ridge Avenues, with the Manayunk church agreeing to pay the interest on the lot for three years. The Presbytery organized the mission as the Wissahickon Presbyterian Church on April 3, 1894.

The church grew steadily until 1930, when it reported 352 members and 256 pupils in its Sunday school. After 1930, a combination of internal problems and the increase of Roman Catholics in the neighborhood led to a large loss of members. Wissahickon never recovered its former strength. In 1980 the Presbytery's Strategy Committee considered recommending that the Presbytery dissolve the church. Instead, it agreed to enroll the congregation in the Small Church Program. For several years there was a resurgence of interest and membership growth. Then disagreement among the members over a proposal to merge with a nearby Baptist congregation led some to leave. By 1990 Wissahickon had only 34 members and 11 pupils in its Sunday school.

At Wissahickon, we continue to seek the Lord by preaching the Word every Sunday. Reverend Crawford Clark guides our ministry in this time of flux and change. Over the last year, we have lost several of our stalwart members and are seeking a new vision for our ministry. In association with an Administrative Commission, we went through a process of self-evaluation and discernment that culminated in a vote to proceed with a plan to seek financial and mission partnerships with outside entities to optimize the use of our building and to create a revenue stream that will enable us to continue. Our building needs significant investment and upgrading of infrastructure.

On the plus side, our neighborhood continues to thrive and recent investment in new apartments indicates a thriving community surrounds us. He have been in discussions with potential partners to create a co-working space, a wedding reception venue and a pre-school. We installed a new roof last spring and await the next phase of our mission.