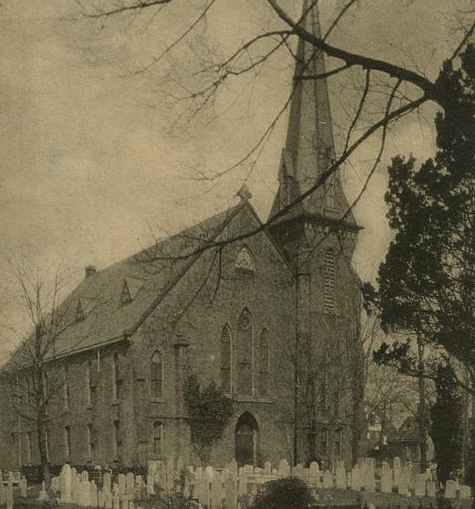 The roots of Doylestown Presbyterian Church reach back to circa 1726 with the Rev. William Tennent, Sr., who was a “circuit rider” or supply pastor and preached at churches in Bucks County including Neshaminy (Warwick) and Deep Run (Bedminster).  The congregation at Deep Run was known as Mr. Tennent’s Upper Congregation.

Rev. Uriah DuBois was called as pastor to Deep Run in 1798 and also the Red Hill Church.  He moved to Doylestown in 1804 to take charge as principal of the Union Academy.  At that time, the town of Doylestown had a population of 100.  A room at the Union Academy set aside for worship and Rev. Dubois preached.  This event marks beginning of Doylestown Presbyterian Church.  Rev. DuBois served the congregations at Deep Run and Doylestown and in 1808 began to preach alternately.  He continued to serve until his death in 1823.

The county seat for Bucks County was moved to Doylestown in 1813 (population was approximately 200) and the town began to grow as did the congregation of the Doylestown church.  The site for the present church was purchased for $400 in 1815, and first church building on the site was 45 x 55 feet and cost $4,200.  Additional lots were purchased in 1817 and 1822.  The church graveyard was the first in Doylestown.

The Rev. Dr. Silas Andrews was called in 1831, and served both congregations at Deep Run and Doylestown (at the time of his call the congregations had grown to 95) until his death in 1881. He was succeeded by numerous pastors, the most recent being the Rev. Dr. William Barger and the Rev. Dr. John Willingham, who serves today.

The congregation grew and an additional frame structure was constructed in 1835 for Session meetings, Sabbath School and lectures.  The church building was enlarged in 1850, adding towers and a spire at front of the building.  The pulpit was approximately 12 feet high, and had a door at the base and winding stairs to reach the top. The original Doylestown church building was torn down and construction begun on a new building (the stone for the structure was quarried locally), and the cornerstone was laid in 1871.  As the congregation continued to grow, it became evident that an education building was needed and was constructed in 1939.  The building was renamed Andrews Hall after the building was refurbished and expanded.  The dedication was held in 1965.  Numerous constructions projects have occurred over the years, the last being a major overhaul and addition of a bridge between Andrews Hall and the Sanctuary under the leadership of the Rev. Dr. Willingham.  This is the first part of an overall plan to provide additional space for Christian education, a small chapel, greater capacity for today’s technology, a connective bridge between the two buildings and allowing for our growing commitment to mission.

The relationship with Deep Run was officially dissolved in 1957.  The congregation of Doylestown Presbyterian Church has continued to grow (the current membership is 1623) and this church has played a significant role in the founding of Lenape Valley and Anchor Presbyterian churches.