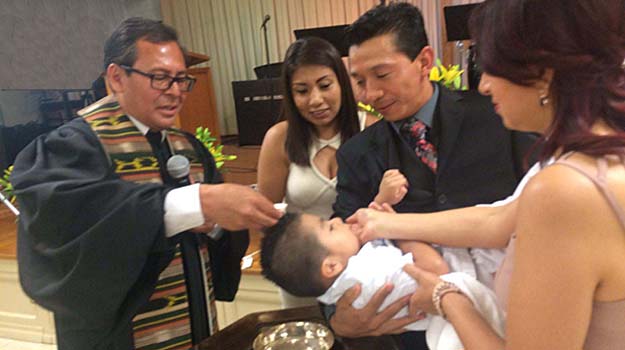 When the First Presbyterian Church of Norristown voted to leave the New School Fourth Presbytery and return to the Old School Second Presbytery in 1854, members loyal to the New School were organized as the Third Presbyterian Church of Norristown, but shortly changed their name to Central. The congregation began to worship in Hill’s Hall, then moved into a new building at 900 West Airy Street. Membership began declining after 1960 and eventually began to decline to a critical level.

In 2010, the commission felt the much-deteriorated church building on the 900 block of West Airy should go up for sale. A definite change took place in 2011 when the building was sold to another church organization.

We (our Latino Congregation) needed a new place to meet for worship and First Presbyterian Church of Norristown invited us to rent a space in their building, just a few blocks away.  There, the group began to grow, and now we are gradually working towards independence.

There are new members added each year and they continue with a strategy of growth that allows them to aspire to be a bigger church. The money from the sale of the building is being held at the Presbytery of Philadelphia, and will be available when we are ready to buy our own building. Pastor Gadiel began a Hispanic Leadership Training series and new leaders are being trained in the mission and ministry of the growing Hispanic community in Norristown.  The congregation continues to develop programs that will help church growth in the future.  We hope that this can become a reality.

And my God will fully satisfy every need of yours according to his riches in glory in Christ Jesus.