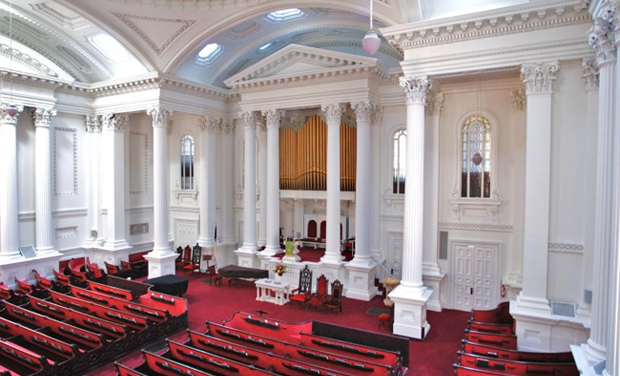 In 1850, the existing church requested dissolution, and a new congregation, organized as the Arch Street Presbyterian Church, purchased the property at 10th and Arch Streets. Rev. Charles Wadsworth D.D. was called as pastor of newly organized church, which he served until April 3, 1862. Membership grew rapidly during Wadsworth’s pastorate, with crowds so great that a trap door was built behind the pulpit so that Wadsworth could enter through the basement.

One of the worshipers was the poet Emily Dickinson, who attended the church when she visited Philadelphia relatives in 1854 and struck up a lifelong friendship with the shy Calvinist. Dickinson referred to Rev. Wadsworth as her “dearest earthly friend” in a letter after the preacher’s death. Some historians even speculate that Rev. Wadsworth was the intended recipient of several passionate, and unsent, letters found after Dickinson’s death which were addressed to “Dear Master.”

While Wadsworth preached at the church eight blocks to the east, another Center City congregation built the West Arch Street Presbyterian Church on the corner of 18th and Arch streets in 1853-1855 for the then-princely sum of $103,571 (over $2.5 million in today’s dollars).

The new church, designed by architect Joseph Hoxie, is in the neo-classic Greek revival style -- which today makes a stark contrast to the two flanking ultra-modern Comcast skyscrapers.  Designed to seat 1100 worshippers, the church interior features ornate Corinthian columns, a domed ceiling, and a massive organ.

In 1897, the neighboring Arch Street churches merged to become the current Arch Street Presbyterian Church at its present location.

ASPC remained one of the Presbytery’s most populous and prestigious churches through the 19th and early 20th centuries.  Under the leadership of Rev. Clarence E. Macartney (1914-1927), its pulpit also became a conservative bastion in the theological debates then roiling America’s mainline Protestant churches. Rev. Macartney engaging in a preaching duel with Rev. Harry Emerson Fosdick, the modernist pastor of New York City’s First Presbyterian Church.  On May 1922, Rev. Fosdick preached a well-publicized sermon, “Shall the Fundamentalists Win?” calling for ecumenism and “a spirit of tolerance and Christian liberty.”

Two months later, Rev. Macartney responded with a blistering sermon at Arch Street entitled “Shall Unbelief Win?” chastising Fosdick and his modernist colleagues for promoting a “Christianity without worship, without God, and without Jesus Christ.”  After Rev. Macartney convinced the New York City Presbytery to investigate the liberal pastor, Rev. Fosdick resigned to become pastor of NYC’s Riverside Church.

In the postwar era, the congregation dwindled as many members moved out of Center City.  By the early 2000s, the church had only a few dozen active members. However, the pews were packed when Charles, Prince of Wales, and Duchess Camilla worshipped at the church on January 28, 2007.  ASPC’s ties to the Welsh community date from its 1970 merger with the Girard Avenue - Welsh Presbyterian Church.  The church continues to host annual worship by the Welsh Society of Philadelphia in its St. David’s Chapel.

In 2008, the Presbytery called Rev. William Golderer, who was then the convening pastor of Broad Street Ministry, to lead an effort to revitalize the church. The church's mission statement includes a commitment to "[welcome and anticipate the presence of those new to faith, those longing for a deeper connection with God and neighbor, and those suspicious of the trappings of religion.”

In recent years, the church has launched Arch Street Preschool, a weekday daycare program serving local families.  The church has also opened its doors to the community – hosting a support group of at-risk LGBTQ youth, local Muslim office workers who use a meeting room for midweek prayers, and over 150 Catholic pilgrims who attended Pope Francis’s 2015 visit to Philadelphia.

ASPC is now in a season of renewal, with growing membership and attendance that is reflective of the community’s diverse socioeconomic, racial, sexual orientation, and theological backgrounds. As it begins a third century of witness to Jesus Christ, ASPC is engaged in a major building renovation project to renovate the St. David’s Chapel, and reorient the entrance of the church to the Comcast Plaza.