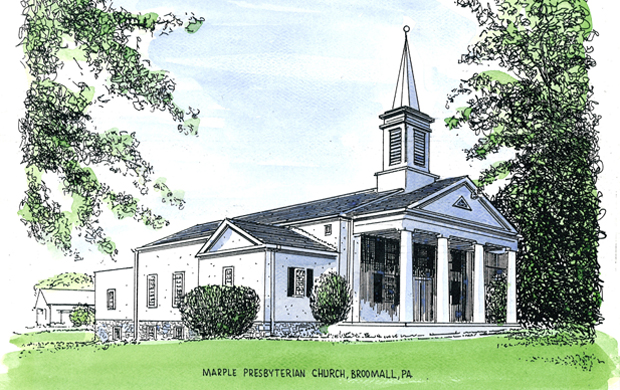 Membership began to grow after World War I, reflecting the gradual change of Broomall from a semi-rural to a suburban community.  By 1930 membership stood at 221, and the Sunday school enrolled 240 pupils. After World War II, when residential development transformed the community, many Presbyterian families from West Philadelphia moved in.  By 1960 Marple reported a membership of 1,242, and a church school enrollment of 1,115. Membership climbed slightly to a high of 1,289 in 1970. During that period the church invested in new buildings that included generous sanctuary space as well as a separate Christian education building which also houses an industrial kitchen and event space.

During the late 20th century, cultural and local demographic changes resulted in a shrinkage of the MPC congregation.  Recognizing these challenges, we have thoughtfully assessed our talents and our position in the community and have remained a vibrant if smaller congregation, committed to our members and the community.

We have a growing group of children at every Sunday's Children’s Moment, have recently expanded the number of Sunday School classes to two levels, have an active Children’s Choir, an active Youth Group, and a regular adult Christian Ed book group.

As a ministry to the regional community, we deploy our physical resources to housing homeless people at night for 1 to 2 months during the year and hosting weekly meetings of Alcoholics Anonymous. We also host regularly scheduled Cub and Boy Scout meetings, singles dances, and other community events as requested.

Responding to financial and stewardship considerations, we rent some space as well, housing a preschool, banquet hall, and Spirit of the Arts Music Academy.

Through these endeavors we have strengthened community ties and gained some new attendance.