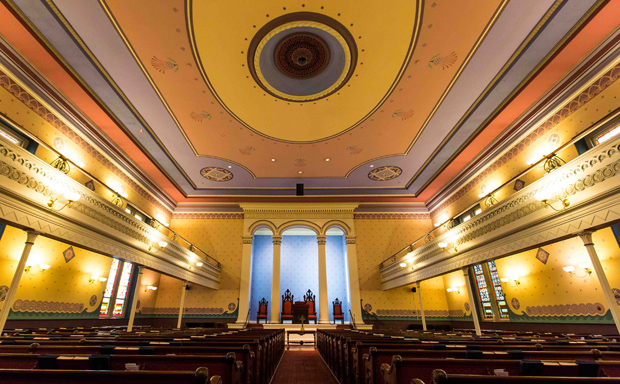 Overcrowding at First Church on Market near Second Street by a burgeoning Scots-Irish immigrant population living and building several blocks south created a need for a Third church to serve that neighborhood. In October 1764, Thomas and Richard Penn gifted a lot at Fourth and Pine Streets to the First Church…to establish a new burial ground and build a Third church. Designed by Robert Smith, construction was funded by subscriptions and lottery. Beginning in 1768, the Pine Street pulpit was supplied by rotating ministers form the First and Second churches. That was…until the errant Third church called George Duffield to its pulpit. A Presbyterian “dust-up” ensued. Duffield found all doors locked when he arrived to preach his first sermon. Several strong men quickly remedied the lock-out. The awaiting throng entered. Duffield climbed to his pulpit and began to preach. Midway through the sermon a court magistrate walked up the center aisle, turned and began to read the Riot Act. A disturbed worshipper bodily lifted the King’s representative and sat him down outside. Undaunted, Duffield continued. Next day he faced arrest and civil court action. Months later, the religious matter was resolved when the Synod of New York and Philadelphia reversed Presbytery action. The civil matter, however, continued to King’s Council in London. Interrupted by war, it was never resolved.

British disdain for Presbyterians was well known. During their nine month occupation of Philadelphia they converted Duffield’s sanctuary into an army hospital. To keep wounded soldiers warm, they chopped up all interior woodwork…cased windows and doors. In June 1778 the only architectural features left were four brick walls covered by a cedar shake roof. Seven decades of façade and interior changes followed…the last in 1857 when an eighteen foot wide monumental portico was added creating the present day entrance on Pine Street.

Duffield, because of his patriotic association with the Revolutionary War era is why the graveyard, with 285 thirteen-star flags commemorating fallen heroes is such a popular tourist attraction.

In 2018, Old Pine will celebrate 250 years of uninterrupted ministry to its community and neighborhood…a testimonial to never being swayed by economic and population trends of the times.

Old Pine’s courage to stay and face change head-on is why the church was able to establish two South Philadelphia mission churches in the mid-19th century. Beginning in 1891 and continuing until 1957, several Presbyterian churches merged with the Third Church. Two of the churches merged assets as well as their names. Thus the Third Church (founded 1768 and incorporated in 1796) today is the Third, Scots and Mariners Presbyterian Church in Philadelphia. “Old Pine”, an early 19th century moniker, however, prevails.

During the rebirth of Society Hill in the 1950s-1980s, the Friends of Old Pine Street (founded 1951) used merged and donated funds to acquire land condemned for redevelopment to renovate Old Pine, build Old Pine Community Center and donate the site for the new building housing the Presbyterian Historical Society.