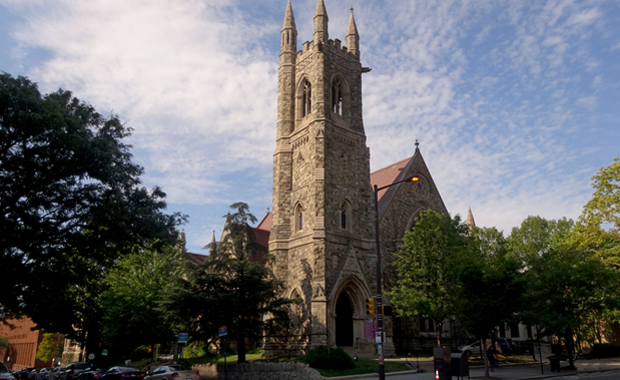 The years from 1902 – 1957 saw the start of Tabernacle’s outreach to students. Tabernacle formed a club for University students in 1908, and signed an agreement with the Christian Association of the University of Pennsylvania in 1913. In 1951 the national denomination created the Westminster Foundation for outreach to students with the pastor of Tabernacle as the Philadelphia director, and an associate who would concentrate on student outreach.

From 1957 – 1990 Tabernacle solidified its identity as a mission church and formed a new relationship with the United Church of Christ. We also provided worship space at various times for Korean, Formosan, and Coptic congregations. In 1957, at the instigation of students, a community outreach program was begun to work with neighborhood children and youth. The Presbytery of Philadelphia paid for a full-time director.

In 1958 a UCC campus minister, searching for a church home for Penn’s UCC students, asked Tabernacle to accept his group as a UCC congregation to be federated with Tabernacle. He became Tab’s assistant minister under this agreement, but each group (Presbyterian and UCC) had its own ruling body (session and consistory) and budget. Full union did not occur until 1982.

Tab’s minister in the 1960s was deeply involved in the struggle to save the homes of black families in “Area III,” the large parcel of land where University City High School now stands. Despite visits to City Hall, petitions, protests and sit-ins, the neighborhood was bulldozed. Tabernacle started a “Responsible Parenthood” program eventually taken over by the Presbyterian Medical Center, and a cooperative Nursery School. Many Tabernacle members protested against the Vietnam War.

From 1969 to 1977, Tab began the continuing practice of starting new community organizations through start-up funds, office space, and the lending of leadership talents of its lay members. Tab played a central role in such new organizations as Action Alliance of Senior Citizens, Women in Transition, The Gray Panthers, and Women’s Alliance for job Equity.

During the 1980s, the congregation voted to become a part of the Sanctuary Movement, which was begun in the Southwestern states, where churches assisted in smuggling El Salvadoran refugees fleeing the oppressive regime of their own country across the Mexican border. In May of 1985, Tabernacle began to host the refugees we were to know only as “Ernesto and Linda.” In due time they were able to return home. They sparked a continuing interest in Central American issues and the formation of a sister relationship with the community of Las Anonas, El Salvador. Several of our young adults chose vocations as a result of involvement with Central American issues.

Decades of accelerating demographic shifts, combined with the destruction of the immediate neighborhood and the move of the national Presbyterian offices from Philadelphia to Kentucky, left Tabernacle serving a shrinking, geographically scattered, and largely transient core constituency interested in both radical peace and justice missions and traditional mainline Presbyterian worship and theology. From 1984 – 1985 the congregation renovated the original chapel, which had for years served as a nursery school weekdays and converted the former sanctuary to a theater. In 1997 Penn signed a long-term lease on the church basement and the theater, which it renamed Iron Gate Theater.

In 1991 Tab began a period of self-examination that led to the decision, based largely on our understanding of the church as sanctuary, to declare ourselves Open and Affirming and More Light, the first Pennsylvania church in either denomination to officially welcome lesbian, gay, bisexual, and transgender persons into full membership and leadership in the congregation. In the mid-1990s members of the congregation started the Career Wardrobe, as well as the Interfaith Working Group, which for ten years educated the public on the role of progressive communities of faith in building an inclusive society.

The years from 1997 – 2010 saw efforts concentrating on intentional exploration and development of spirituality, Christology, theology, and community through preaching, worship, and adult education. We instituted a policy of giving free meeting space to organizations whose mission is consistent with the congregation’s, strengthened our ties with Las Anonas, developed a relationship with the New Jerusalem recovery community in North Philadelphia, and started a ministry of Holy Unions for same-gender couples. Tabernacle launched the Arts and Spirituality Center (now Artwell) and members of Tabernacle were instrumental in the launch of the Interfaith Center of Greater Philadelphia.

In recent years, Tab has become a member congregation with both the New Sanctuary Movement and POWER (Philadelphians Organized to Witness, Empower and Rebuild). We have also begun a prison ministry of corresponding with prisoners and supporting them through letter writing, visitation and some financial support. We also maintain a small closet of basic adult clothing items for those in need who come to our door during the week or whenever we are present to accommodate them.