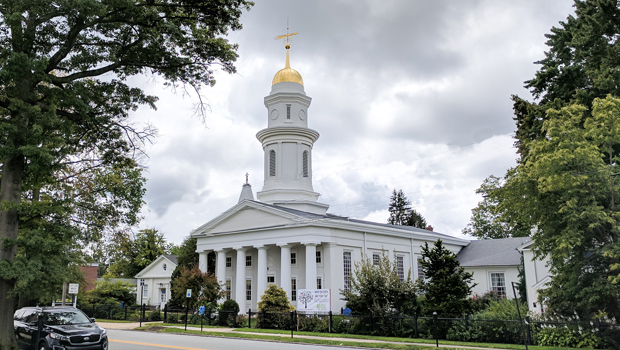 The first church service of the infant Media Presbyterian Church was held on March 10, 1850 in the Temperance Hall on the second floor over John C. Beatty's Dry Goods and Grocery Store. Mr. Beatty's store, located on the northeast corner of South Avenue and State Street, was the first store to be constructed in Media after it became a town.  Reverend James W. Dale, pastor of Middletown Presbyterian Church, conducted services.

John Beatty was an ardent supporter of this new church. While regular church services were held on the second floor above the store, a Sabbath School was also organized. It met in the home of John Beatty which was built immediately behind the store, fronting on South Avenue. Reverend James W. Dale began making plans to construct a church edifice, a home for the new Presbyterian Church in Media.

The new church was built on one of two lots donated to the church by Mr. John Beatty from 40 acres he had purchased in 1853. The architect was John McArthur of Philadelphia and the chief contractor was John Haddock of Media. The sanctuary was designed to seat 350. The cornerstone of the church was laid on July 4, 1854. It was dedicated on October 11, 1855 and conducted as a Mission of Middletown Presbyterian Church.  On January 2, 1866, a petition was presented to the Presbytery of Philadelphia by nine members of the Middletown Church, asking for the organization of a church at Media.  On October 1, 1866 the Presbytery of Philadelphia acknowledged Media as a fully organized church with 46 members, 4 Elders, 3 Deacons, and 9 Trustees.  Reverend Dale was installed as pastor.

The total cost for construction of the church was $10,500. Construction of the church was financed partly through contributions with the balance of $3,500 paid for by the Presbytery of Philadelphia. The money promised by the Presbytery of Philadelphia was eventually paid but only after a long delay. Rev. Dale mortgaged his home and personally carried the debt for a long time. This was done so that the contractor could be paid and the construction of the church proceed without interruption. Besides the large contributions of both the Dale and Beatty families, Rev. Dale is said to have used his influence to secure subscriptions from others as is reflected by the contributions from Samuel Riddle ($150 plus pews), John Crozer ($125), and Samuel Leiper ($500). All were members of prominent industrial families in the area.

Throughout its history, Media’s mission has been to love God and our neighbor.  The congregation seeks to grow spiritually through worship, prayer, Bible study, fellowship, mission, and service.  Nine senior pastors have served, as well as associate pastors, and numerous non-ordained staff over the years. Preaching and living the gospel, being a mission-oriented church, and children and youth ministries have always been core values.  Over the years our children have been shown God’s love through our Sunday school programs and Vacation Bible School; our youth have grown in their faith through confirmation classes, youth group, summer camp at Kirkwood, and mission trips.  Adults have studied God’s word on Sundays, Wednesday nights, in the Bethel Bible Series, in circles, and in small groups.  Several who grew up in the church went on to ordained ministry.  Fellowship opportunities like couples’ group, young mothers’ groups, progressive dinners, family retreats, and book clubs have enriched relationships.  The Sanctuary Choir, Worship Team, and youth, children’s, and bell choirs have enhanced our worship experience. Deacon ministries have provided for the congregation’s needs and benevolence needs in the community.  Local missionaries and missionaries around the world have been supported and our members have participated in hands-on ministry for 20 years, in Chester, in North Carolina and West Virginia during our yearly All Church Mission Trip, and in other parts of the world including Ghana, Mexico, and India.

As we live into the 21st century, Media Presbyterian continues to pray, study, and share the message of salvation and love of Jesus Christ within our walls and in our community and beyond.