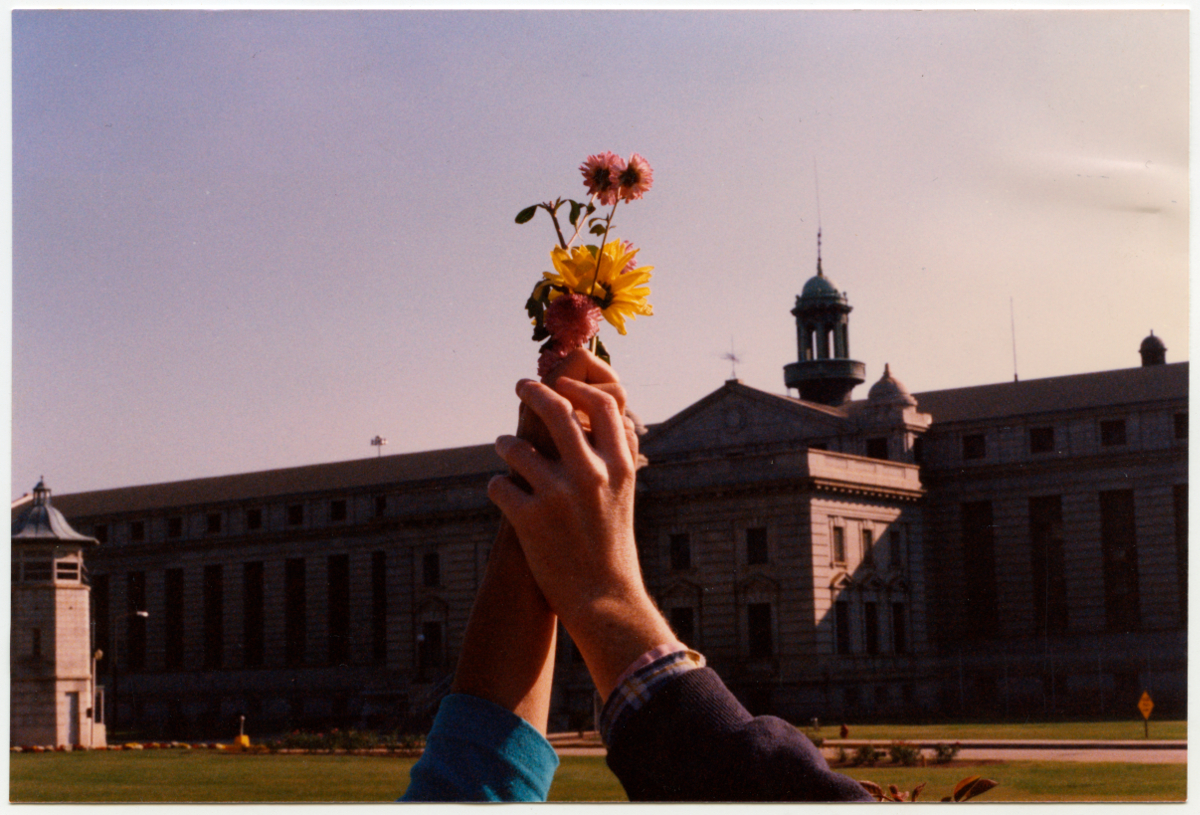 When the Reverend Henry Russell “Russ” Mabry decided to ignore the advice of an instructor to never work with “criminals,” he certainly anticipated a volatile workplace. What he couldn’t have imagined was that his workplace would take center stage while the nation watched as the interests of the United States and Cuba, of immigration and criminal policy, and of jailer and jailed violently collided in late 1987.

“They lined up 20 hostages on the wall opposite the chapel," Mabry would remember about the Marielitos prison riot he witnessed in an Atlanta correction facility. "There were people running everywhere. No one seemed to see me. I realized I could get away….Then I said to myself, ‘I’m staying.’ I just couldn’t walk out on the hostages. I didn’t know what I could do, but I wasn’t going to leave them.” 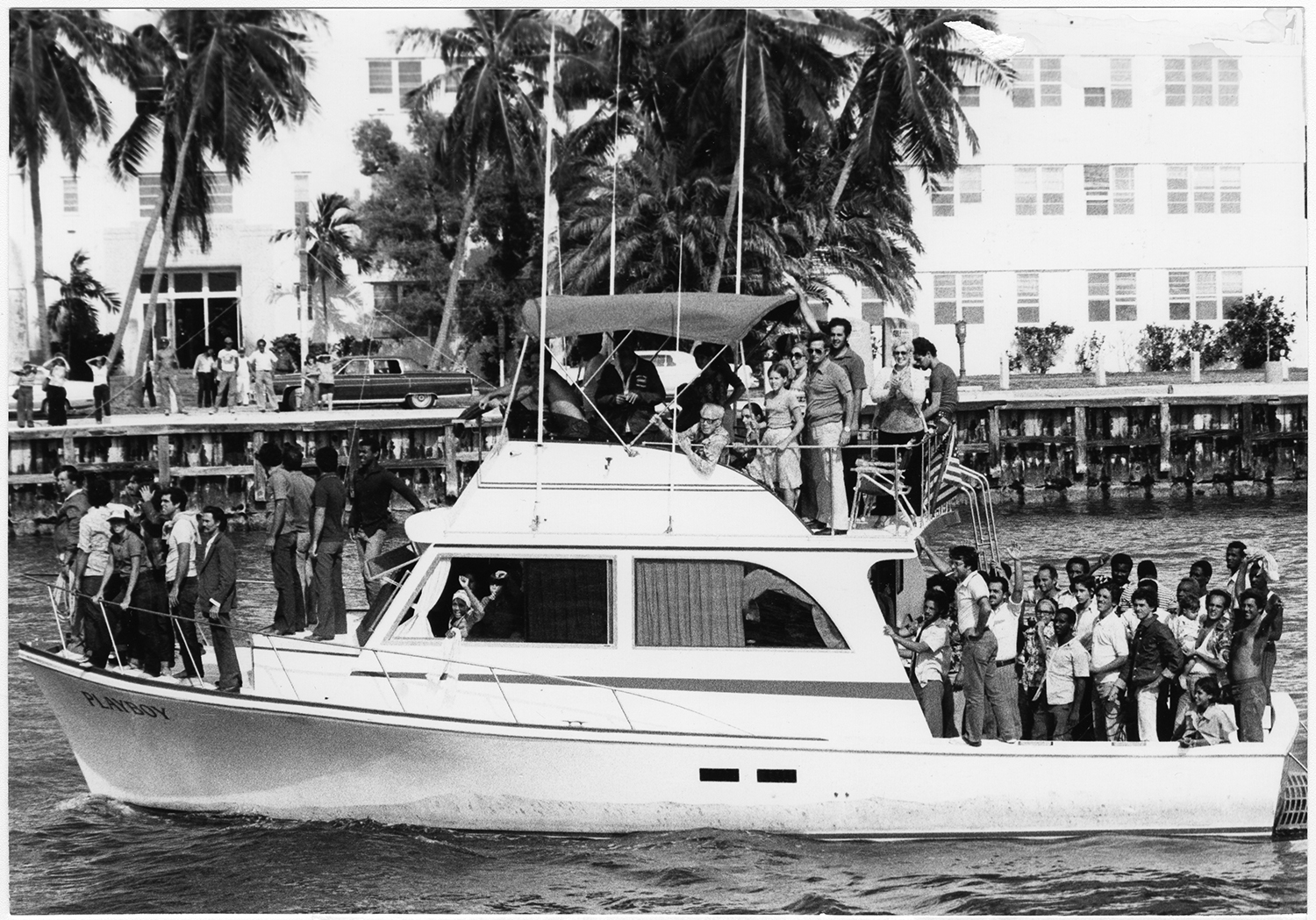 Born in Humboldt, Tennessee in 1940, Mabry’s first major interaction with the criminal justice system didn’t occur until early adulthood following the indictment of Z.T. Osborn, a respected lawyer, son of Mabry’s pastor, and associate of Jimmy Hoffa. After serving his sentence for jury tampering, Osborn found the stigma of conviction so unbearable he committed suicide. Mabry later recalled that Osborn’s death “touched” him in a way that he would only fully understand as he grew older. After graduating from Louisville Presbyterian Theological Seminary in 1970, Mabry was ordained by the Presbytery of Southern Illinois (UPCUSA). Initially serving as a parish minister, a chance meeting with a chaplain from the Marion Federal Penitentiary spurred him to learn more about and eventually answer a call to prison ministry. After working at institutions in El Reno, Oklahoma and Leavenworth, Kansas, Mabry arrived in Atlanta, Georgia, to serve at its federal penitentiary.

Also on a winding course to the Atlanta penitentiary were several thousand “Marielitos,” Cuban refugees who had arrived in the United States via the Mariel Boat Lift of that year, a mass exodus that followed an incident in Havana when six Cubans in a van broke through the gates of the Peruvian Embassy. Miscalculating the mood in the country, Castro announced that any Cuban who could find a country to accept them was free to leave. Five days later, nearly 10,000 asylum seekers were crowded on the embassy’s grounds. Unlike previous waves of Cuban emigrants, these asylum seekers were “younger, darker, poorer, less educated…than any [previous] group.” Realizing it had erred, the Cuban government decided to use the crisis to rid itself of “undesirables”: political dissidents, the mentally ill, sex workers, and others who found themselves on the wrong side of the Castro administration’s mores. Miami-Dade County Judge Ivonne Cuesta was three when her family was forced to leave. Like other Marielitos, she remembers a knock on their door in the middle of the night and the scramble to flee Cuba. Among those expelled were thousands of “visible” LQTBQIA+ persons deemed “anti-revolutionary.” Many of these Marielitos became vital members of the gay community in Miami. Some also found their way to Philadelphia, settling in the Fairhill neighborhood thanks to efforts led by groups such as the Metropolitan Community Church.

While the U.S.A. initially extended a policy of open hands and hearts to Mariel Cubans, rumors and unfounded media stories about the “criminality” of Marielitos (epitomized by the film Scarface) soon led to a cooler response. Classified as “excludable aliens,” Marielitos were considered to have never officially entered the U.S.A., and, as such, were not protected by the due process and equal protection guarantees of the Constitution. Those refugees paroled by the Immigration and Naturalization Service (INS) could find their right to live and work in the U.S.A. revoked at any time, but many were simply never released at all following their arrival at coastal processing centers. Those who admitted to serving prison time in Cuba, for example, were considered ineligible for immigration parole—even those who had been imprisoned for political reasons. Still more Marielitos were detained over time; some were unable to find sponsors, some (particularly the poor and mentally ill) were considered in danger of becoming “a burden” to society. Others were the victims of poor recordkeeping and institutional malaise, sometimes for having the misfortune of sharing a name with someone else INS wanted detained. Joining them were those who broke U.S. law while on immigration parole. In these cases, even those who had committed non-violent offenses would serve their sentence in state or municipal institutions only to find themselves re-detained by INS. Due to their immigration classification and the lack of a home country to deport them back to, these Marielitos found themselves in indefinite detention. 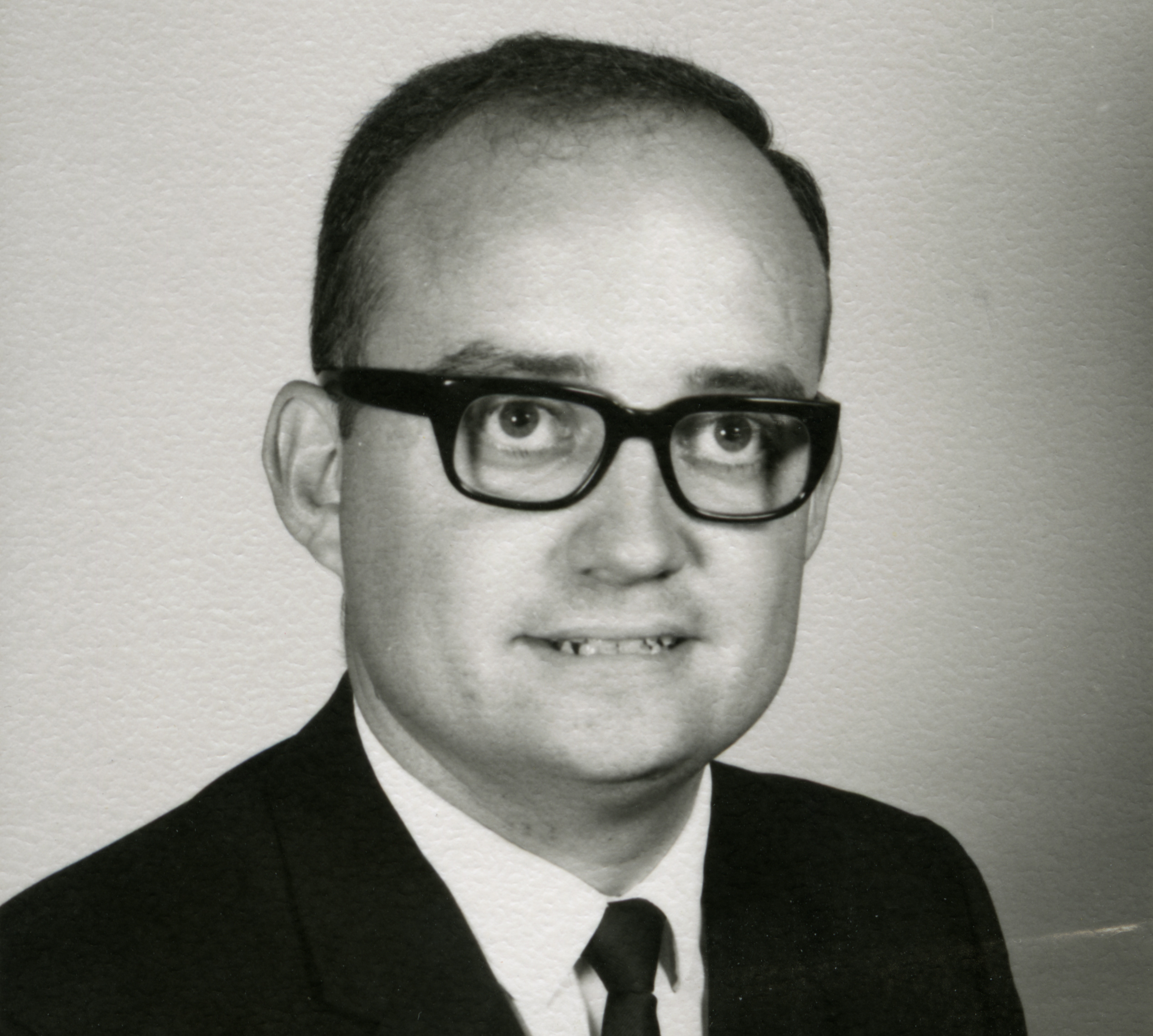 Detainees were primarily housed at the federal penitentiaries in Atlanta and Oakdale, Louisiana. Conditions were lamentable. Both facilities were overcrowded, some inmates were held in solitary confinement for 23 hours a day, and suicide and self-harm were rampant. A 1987 report by the Minnesota Lawyers International Human Rights Committee contained in PHS records documents the cruel treatment directed at detainees. As news spread, activists across the country began to mobilize, and outcry over the Marielitos’ plight began to grow, including in Washington D.C., where Representatives John Lewis and Robert Kastenmeier led the charge.

PHS records show that Presbyterians were actively involved in the movement to aid the Cubans, often in concert with the National Interreligious Task Force on Criminal Justice (NITFCJ) of the National Council of Churches (NCC). Kathy Young Lancaster led the response from the offices of the Presbyterian Criminal Justice Program (CJP), working with such groups as La Resistencia and the Coalition to Support Atlanta’s Cuban Prisoners.

In June 1986, the “Resolution on the Detention of Cubans in the Atlanta Penitentiary” was approved at the 198th General Assembly. In August, Stated Clerk of the General Assembly Rev. James E. Andrews, as well as the criminal justice programs originated by the PCUS and UPCUSA, joined an international campaign to urge officials to investigate conditions in the prisons. They sent letters to President Ronald Reagan, Secretary of State George Schulz, and Alan Nelson, Commissioner of INS, among others, although a response from Norman A. Carlson, Director of the Federal Bureau of Prisons, reveals that these officials may have been less than receptive to the activists' pleas. In a response to Andrews, Carlson blames the Marielitos for subpar conditions, stating “As a group they have been violent, hostile, and extremely difficult to manage.” 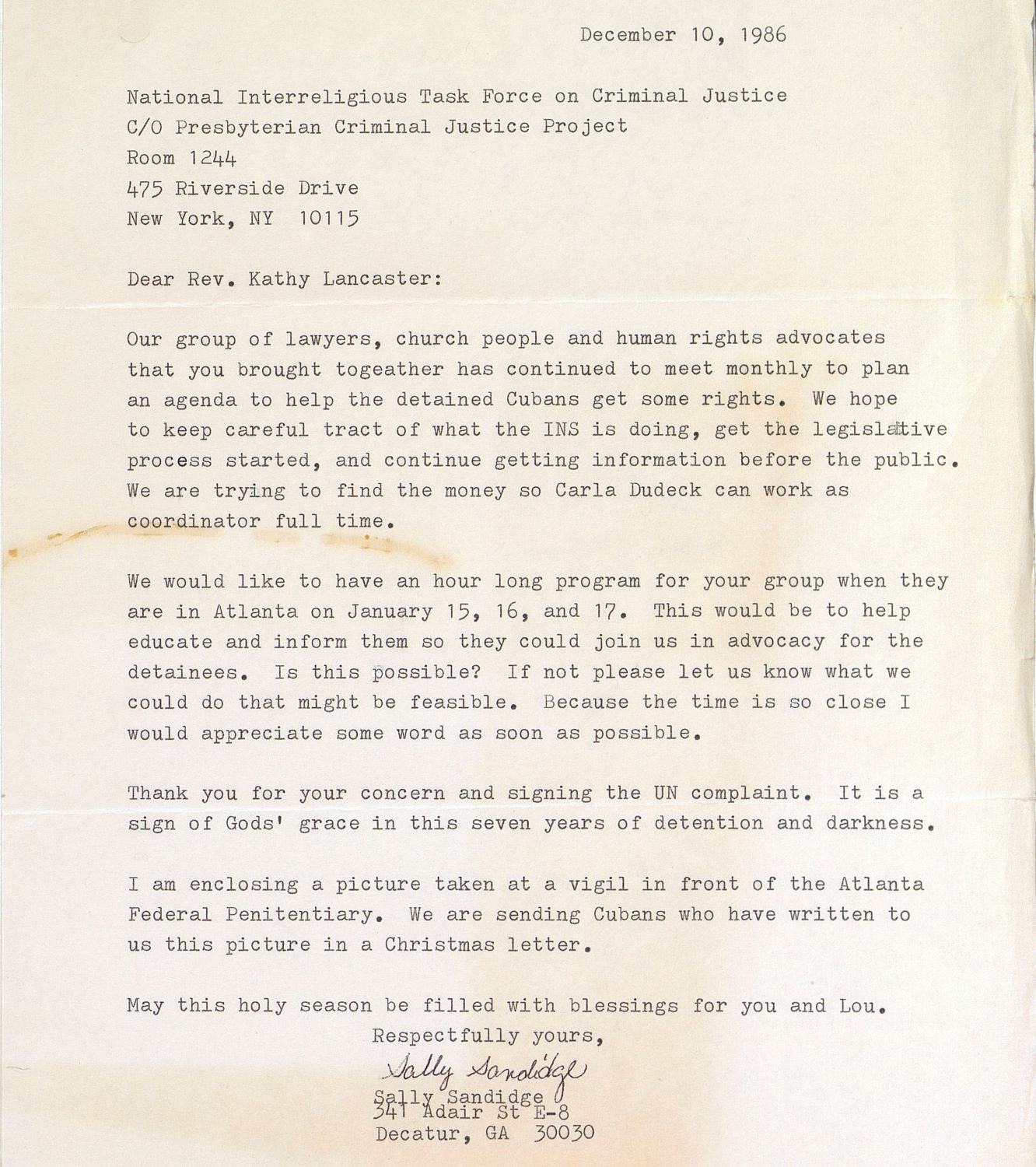 Letter to the National Interreligious Task Force on Criminal Justice, from RG 519.

By 1987, around 4,000 Marielitos were being detained and tensions were high. In an interview for the Presbyterian Survey, Rev. Mabry described the psychological stress indefinite detention inflicted on the prisoners, recounting the case of a man whose wife found herself facing an unexpected hysterectomy: “This Cuban didn’t know when he was getting out.…Underneath his pleasantness there was a real rage. He had no control over his life.” In November 1987, the Department of State announced that it and Cuba had agreed to reinstate a 1984 agreement to deport around 2,500 Marielitos. Mabry relates the shock the announcement caused in Atlanta, where many detainees still believed in and clung to the “American Dream” despite their imprisonment. Mabry remembered, “I heard some of the greatest patriotic speeches from the Cubans.” The prospect of a return to Cuba sparked the rage of the inmates into action. On November 21, the prisoners in Oakdale violently took over the facility and on November 23, the inmates in Atlanta followed suit.

“I heard some yelling and I went out of my office door and saw prison guards running towards industries," Mabry remembered. "Then about 30…inmates…came piling into the chapel area. They went to the back…and hit the floor on their knees and started praying. I went into the priest’s [Chaplain Ray Dowling’s] office and looked out the window. I remember seeing the acting captain and two other officials—friends of mine—in handcuffs. The Cubans were breaking the windows in the metal detector. I just couldn’t believe it." 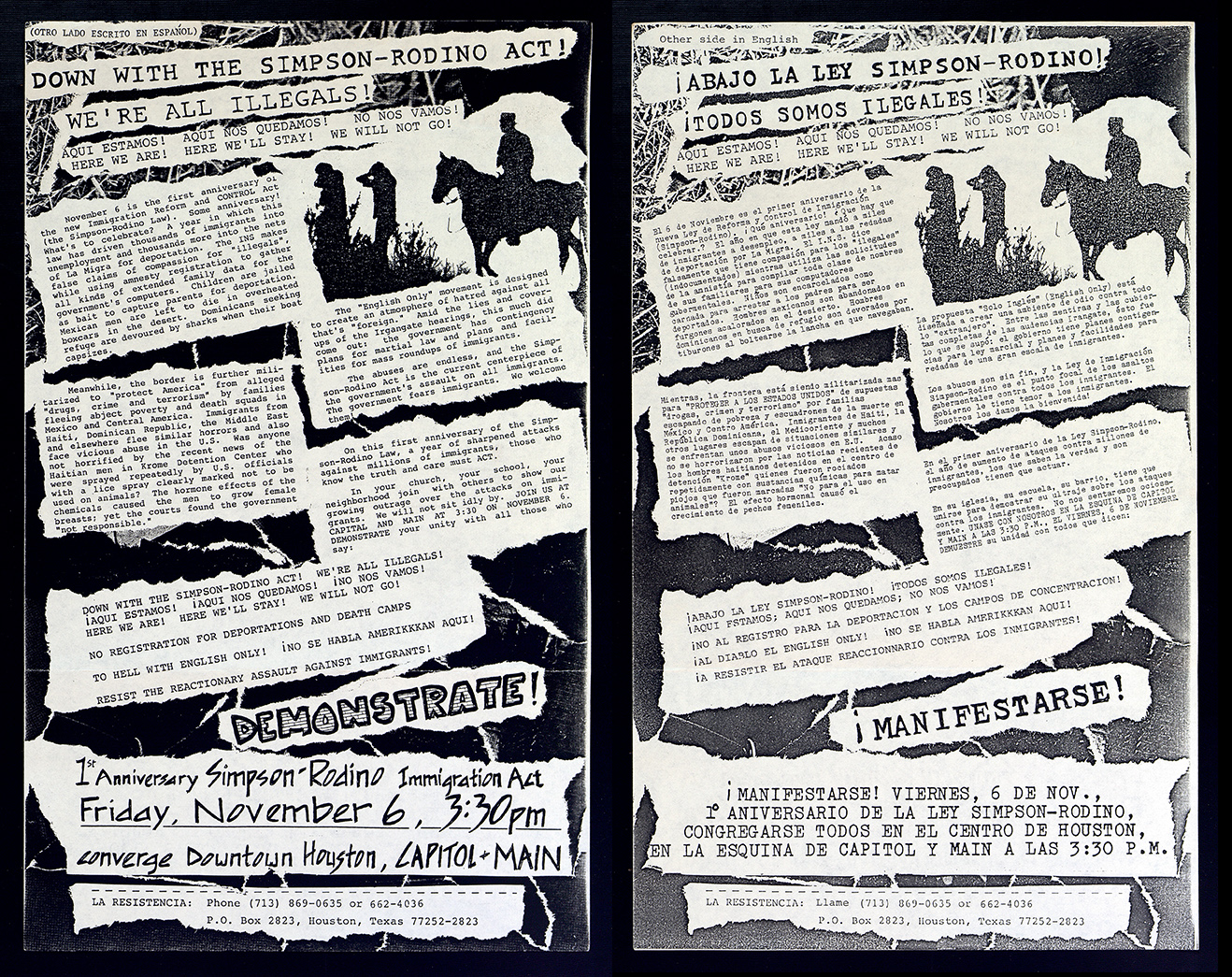 The uprisings would last 11 days and cost one life, an Atlanta inmate who was shot by a guard in the initial skirmish. Mabry’s account reveals a surprisingly tame “riot.” Although there were some “hot knives,” most of the terror the hostages felt was at the thought of a rescue attempt on the part of the FBI. The two chaplains were allowed to move freely around the prison, and medical personnel, while confined to the infirmary, were also respected. A number of inmates took it upon themselves to protect the prison staff—Mabry recalls two instances in which they saved the lives of hostages—and the captives were served three meals day, given routine medical attention, and allowed comforts such as pillows and blankets. When asked by federal officials to turn over former head of the Aryan Brotherhood, Thomas Silverstein (one of the few non-Cubans still incarcerated in the Atlanta penitentiary), the Marielitos did so in a gesture of goodwill. The inmates had rules against drinking, doing drugs, and fighting; held prayer meetings and Thanksgiving mass; and even built two shrines on opposite sides of the prison. A statue of Santa Barbara (patron saint of Cuba) became one repository for tokens of devotion, and Mabry witnessed the construction of another around a painting of Our Lady of Copper.

“They put up this painting, built an altar and put out some candles. They started bringing quarters from the vending machines…they even put down dollar bills. At one time there were 400 or more dollars on the altar. At that point, the priest said to me, ‘We are safe.’” 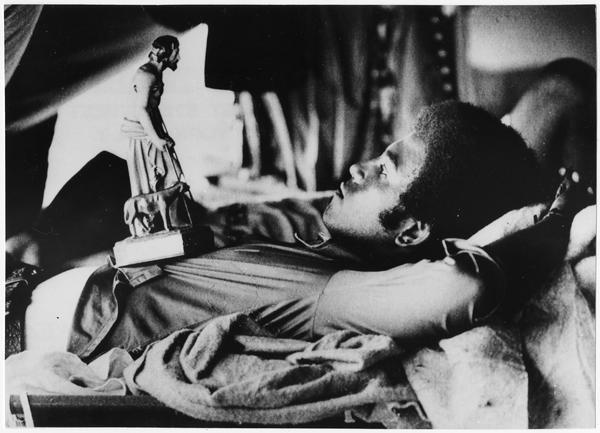 Religious News Service photo of a Cuban refugee in Miami studying a statue of the patron saint of Cuba, 1980. Pearl ID: 147001

The prisoners’ main demand that there be no further deportations would prove impossible to grant, however; Attorney General Edwin Meese wasn’t willing to place it on the negotiating table. The best he would offer was a moratorium on deportations while each Cuban’s case was individually reviewed. After much internal debate, the Marielitos at each facility would accept the government’s offer; those at Oakdale did so on November 29, while the inmates at Atlanta held out until December 4 in hopes of obtaining a better offer. The Cuban Review Panels put in place were ineffective at best. A South Florida Sun Sentinel article from July of 1988 reported that over 2,000 Marielitos were still in custody, and CJP records reveal that in 1990 only about half of those whose files were reviewed had been released.

Marielitos and other Cubans convicted of crimes after 1987 also found themselves indefinitely detained, awaiting determinations from panels that would over time move from the jurisdiction of INS to that of Immigration and Customs Enforcement (ICE). The remaining Marielitos in detention were given another chance to apply for release when the U.S. Supreme Court decided in 2005 that prohibitions against indefinite detention also applied to “excludable aliens.” But another wave of immigrants and the rapprochement between the U.S.A. and Cuba put the fate of a different group of Marielitos up in the air. In the last days of his final term, President Barack Obama formally rescinded the previous deportation agreement between the two countries, known as the “wet foot, dry foot” policy, established in 1995 under the direction of President Bill Clinton. About 250 Marielitos who were on the 1984 deportation list may now face deportation.

The story of the Marielitos, and the records documenting Presbyterian work to free the prisoners, remind us that the ongoing cruelty and brutality of U.S. policy toward migrants and refugees is not a new thing. It goes back decades.