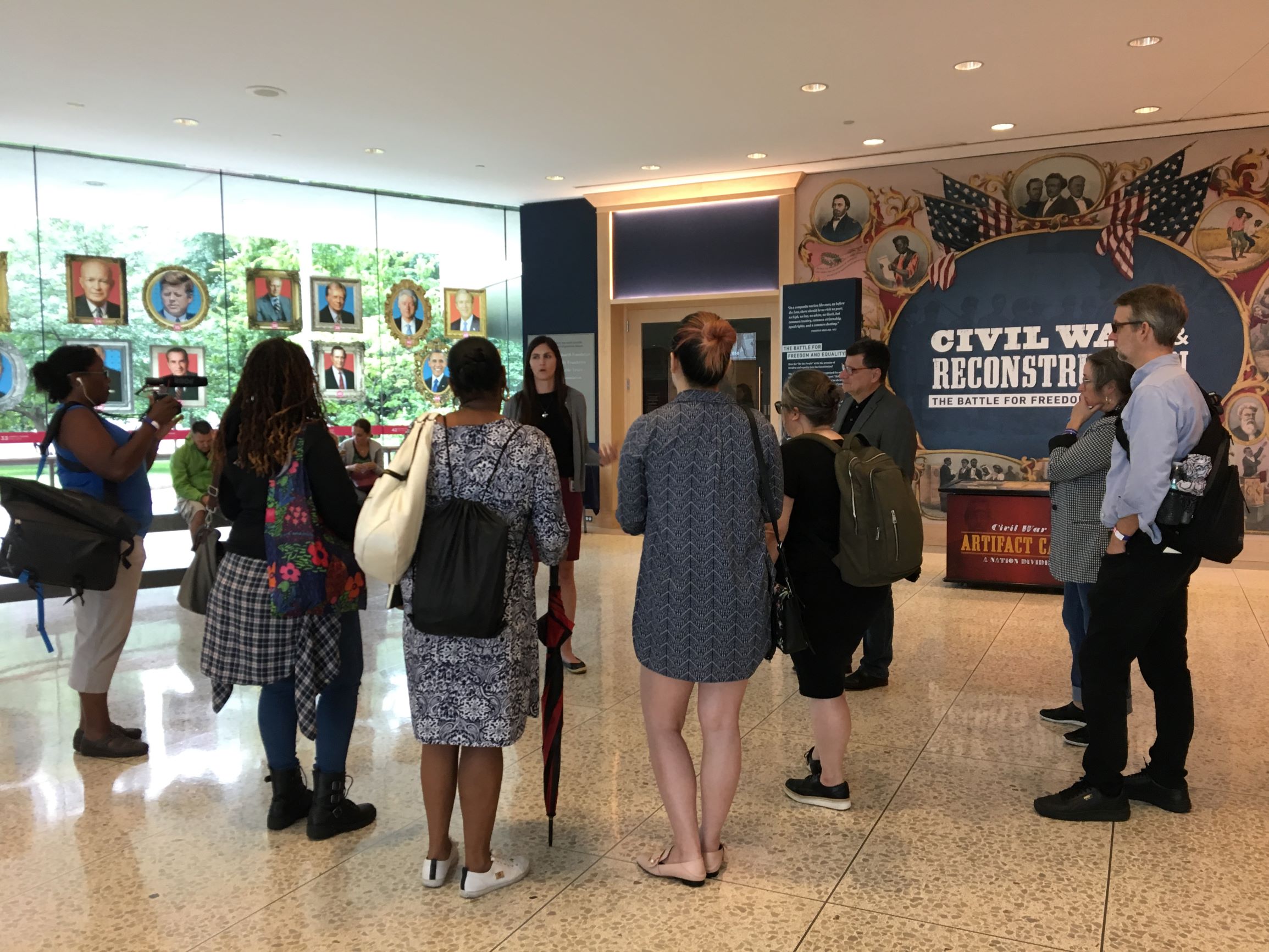 "Stephanie: would you tell us a little about your research at PHS?"

My journey with the Building Knowledge & Breaking Barriers project began with me fielding that question, and my face turning beet red, during a lovely dinner I was invited to at the Presbyterian Historical Society in December 2018. The rain prevented substantial attendance, but I might as well have been put on-the-spot in a room of thousands. I had written a paper using primary source documents from the Presbyterian Historical Society’s archives as evidence to demonstrate that free women of color in the newly formed Philadelphia Female Anti-Slavery Society were being openly segregated against by white members during meetings in Quaker meeting houses. Furthermore, I highlighted that even while white members of the Philadelphia Female Anti-Slavery Society were beginning to critically think through their own subjugation to men, this level of apparent consciousness was not applied when intersecting with some women of color they worked directly alongside in the female anti-slavery society (where all members were claimed to be equal).

I had been invited to this event as a student of Dr. Joel Tannenbaum at the Community College of Philadelphia after writing that paper for his class and using the PHS document sets as part of the requirement. I had a vague understanding this event would introduce the Building Knowledge & Breaking Barriers project, and I sensed it might be an opportunity to participate in something interesting and impactful, so I went. Long-story-short, I told the gathering about my research project and ended up applying to become a member of the exhibit panel PHS was beginning to form. After being selected, I was ready to get started and meet everyone right away. 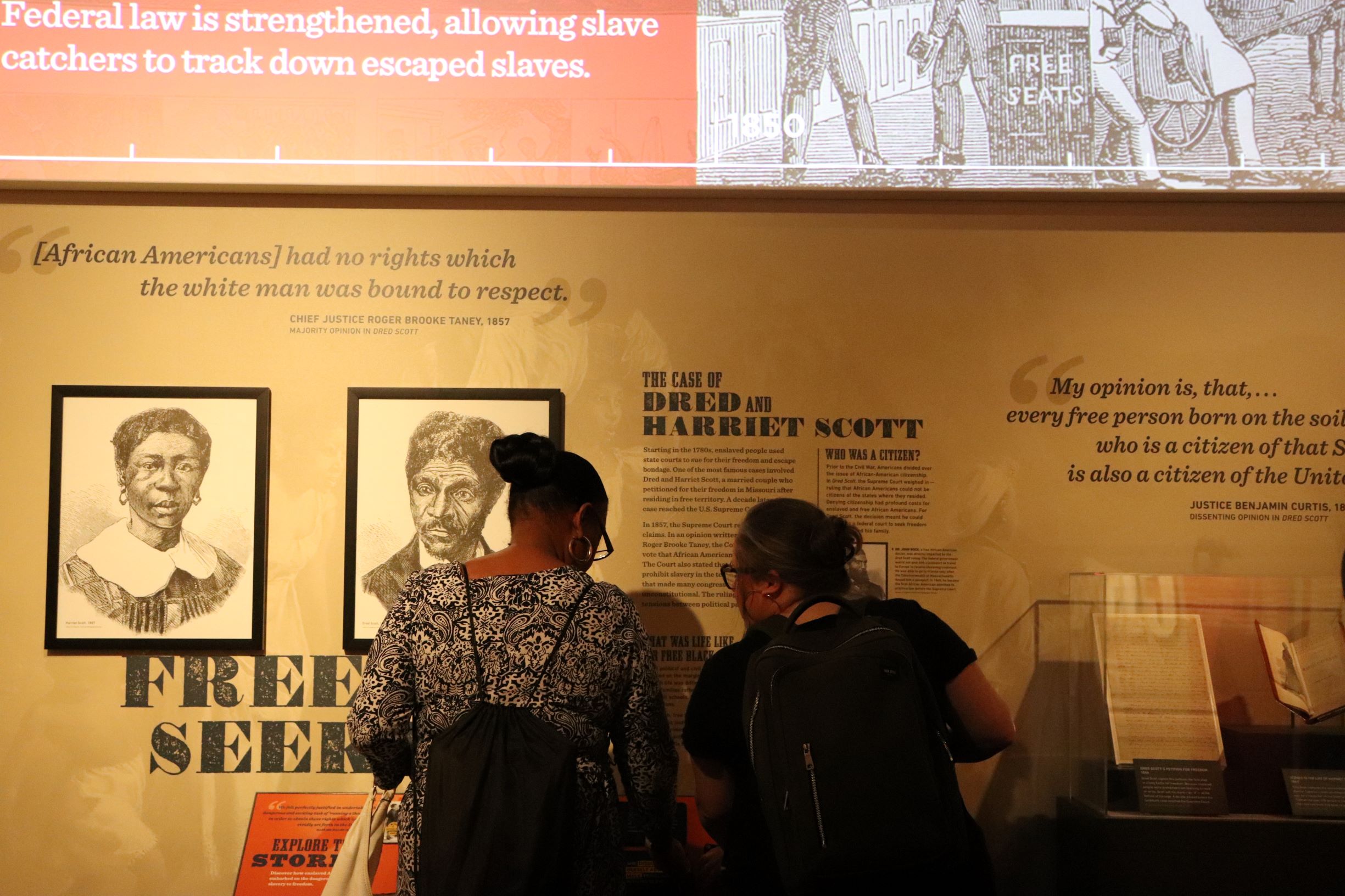 Since then I’ve had the privilege of meeting fellow panelists Jennifer, Maya, and Celia and the esteemed exhibit designers and professors Stacey Mann and Keith Ragone, who are mentoring us through the process of creating an exhibit using archival materials from PHS. To kickstart the process Stacey and Keith took us on a tour of three prominent Philadelphia galleries this summer to spark some conversations about various exhibit designs.

Our first stop was the National Constitution Center exhibit on Reconstruction, which included some interesting lighting, organizational, and special elements I found helpful for moving within the exhibit and following the story. After viewing an on-display klansman robe, our group had a particularly lively conversation about censorship and messaging. Some felt the full assemblage and image could be too triggering for viewers while others of us endorsed the full display, arguing there is nothing productive about veiling over the violent truth of the past or hiding the fact that problems with racism persist today within modern power structures and organizations. 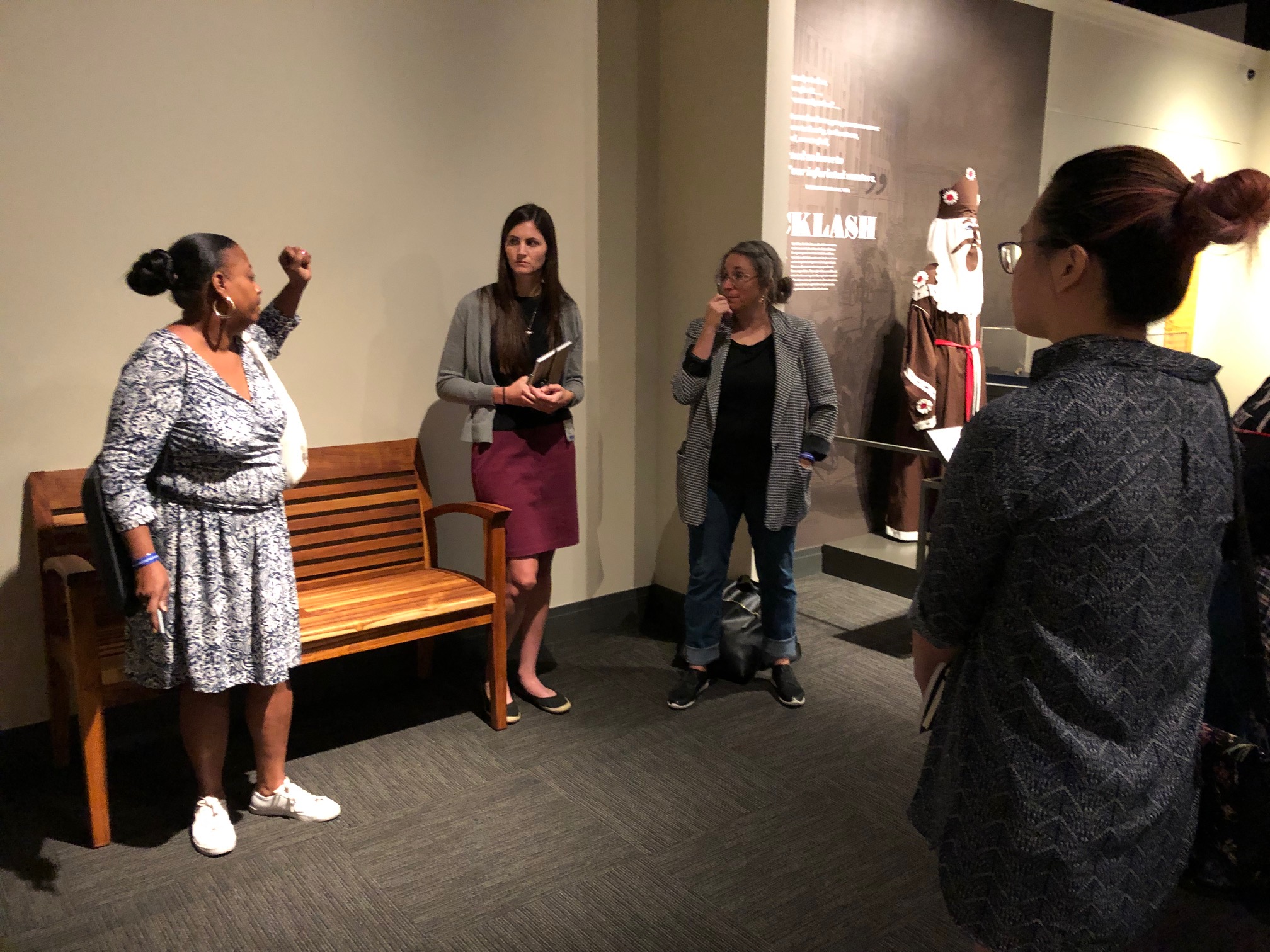 Next we visited the galleries of the Second Bank of the United States, a place that left me feeling rather imposed upon. The backstory we received alluded to the erection of the gallery spaces as being somewhat forced, using a previously empty building and the National Park Service’s collection of Charles Willson Peale portraits, so maybe that accounts for part of my reaction. There was little interactive quality. And I don’t mean this from an accessibility perspective in terms of being able to touch things or physically interact. It was as if reflection was simply discouraged—unless you identified with and wholeheartedly admired the people in the portraits as heroic. It can’t be denied the space had a strong effect. The portraits loomed like memorials to the individuals depicted.

The last visit was to the beautifully elaborate Museum of the American Revolution. It was impressive. The finishes and materials were expensive and the space massive. You could tell not a dollar was spared in the design, materials, and installation of such an impressive exhibit. The mapping and flow were smooth and well thought out. Of course, that’s much easier to do when you have huge amounts of square footage to work with, but it was still done beautifully. Accessibility was clearly a priority when it came to flow and exhibits, which made me feel like MAR took the concept of “safe space” seriously. From an aesthetic perspective, everything was beautifully done. In relation to our project, I took away ideas relative to light, technology, and flow. More specifically, I appreciated the timeline display in one exhibit and some of the ways they exhibited documents. 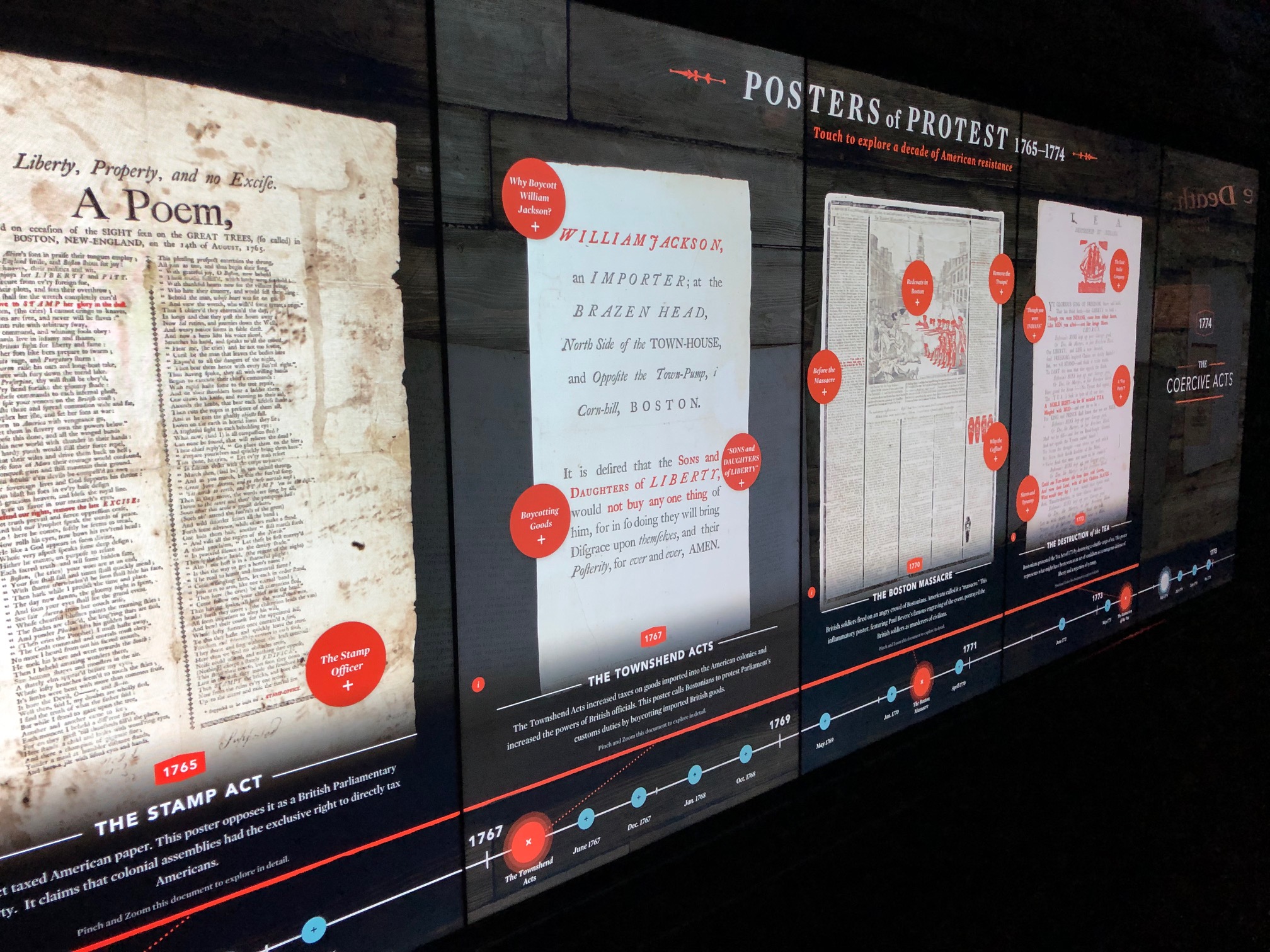 With our exhibit design, which we’ll be building over the next six months, I plan to take the experience and ongoing reflection of all three exhibits into account as we move forward with group conversations, planning, and final creation. It was an enlightening experience that I hope we have time to do again, perhaps in some smaller exhibits like the Institute of Contemporary Art in West Philly and others. 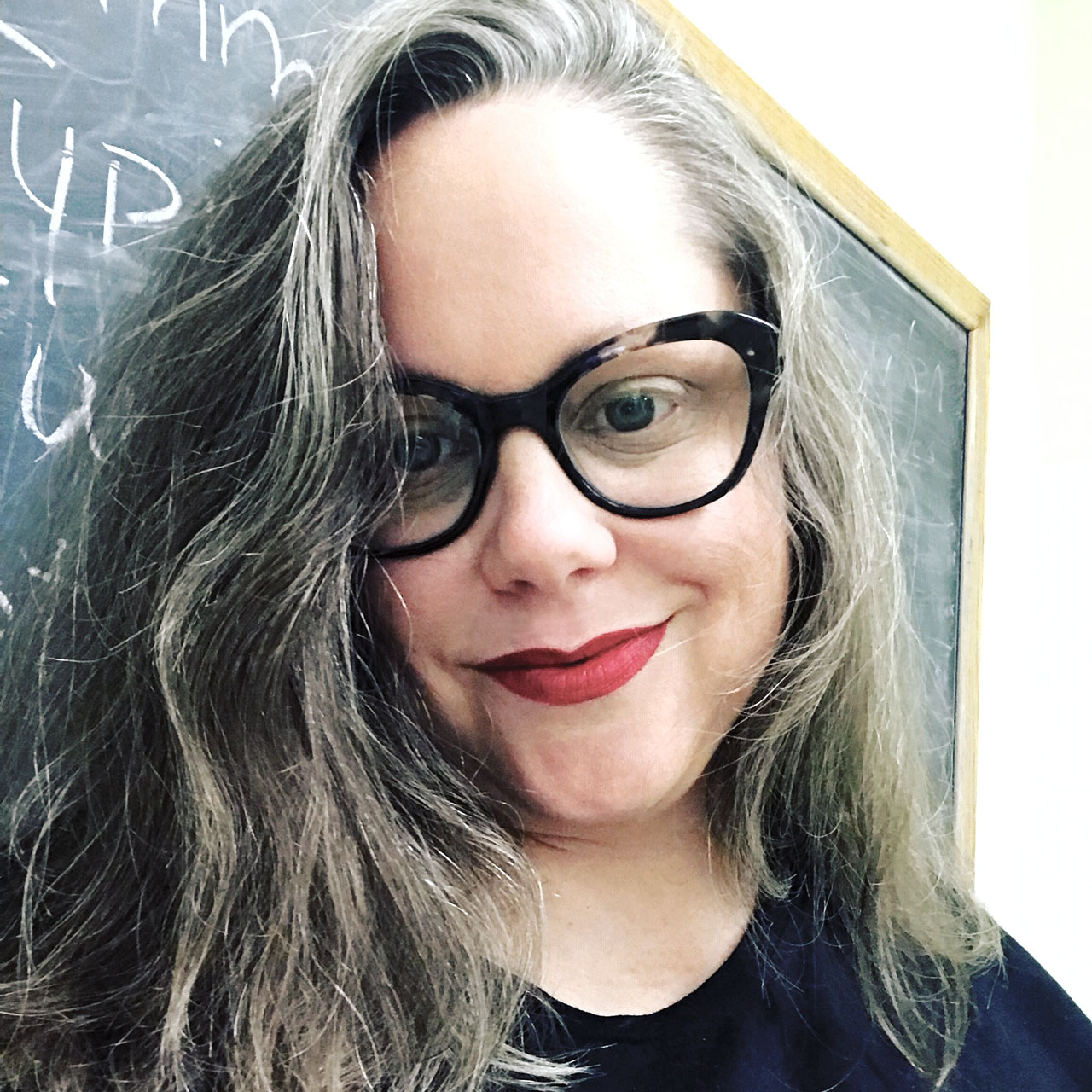 --Stephanie Santoro is a student in the Honors Program at the Community College of Philadelphia and a Building Knowledge & Breaking Barriers Student Exhibit Panelist. Stephanie is interested in history and art history and has long term plans to pursue a doctoral degree in one of these disciplines. She is also an abstract painter and works as a freelance writer.