Plymouth at 400: From the Poethig Family Papers 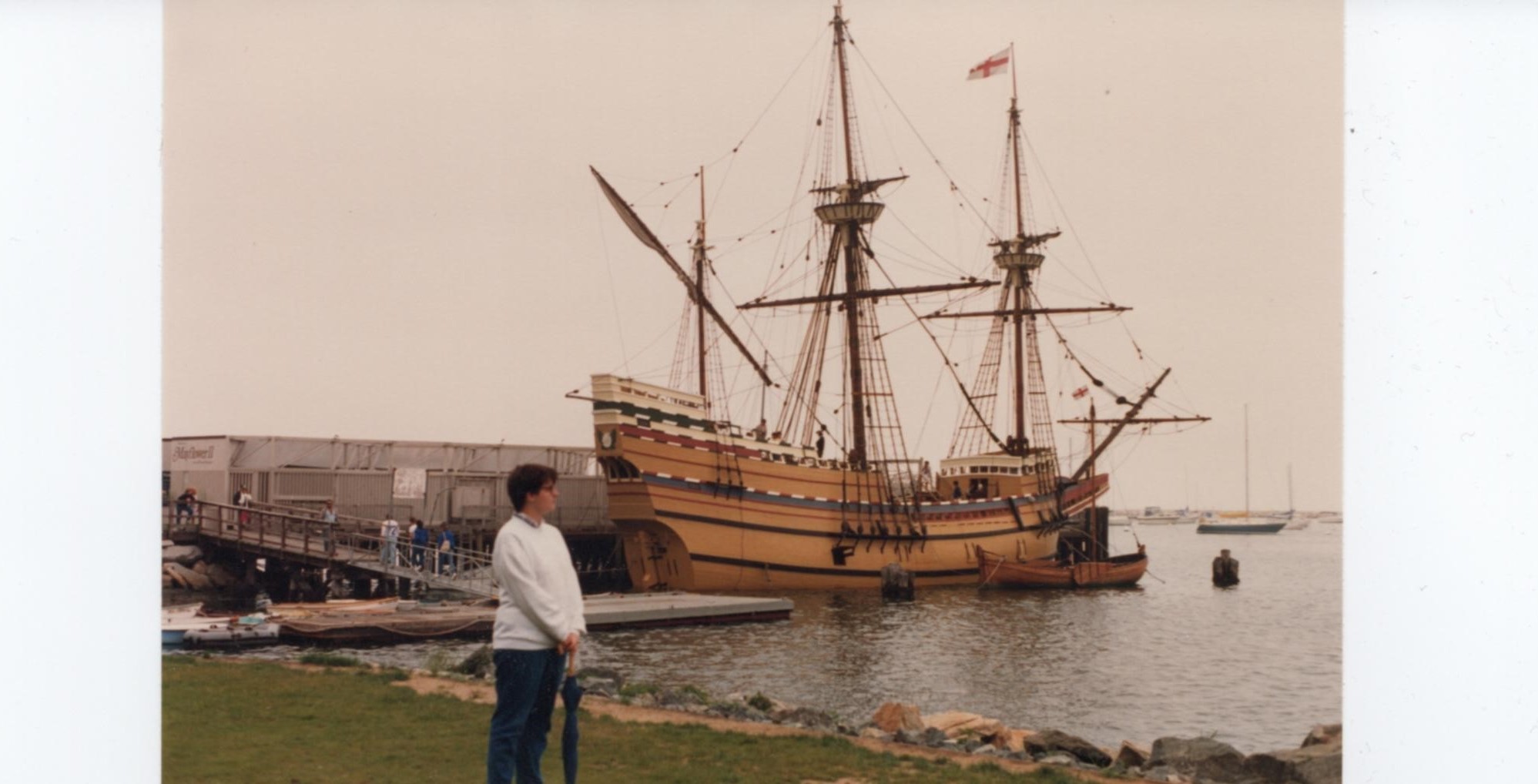 Editor’s note: In the Poethig family papers at PHS researchers can find two intertwined stories about the history of the Plymouth Colony: (1) a study of Plymouth’s founding 400 years ago written by Eunice Blanchard Poethig and (2) the story of the Poethigs’ connection to that history, written by Richard and Eunice Poethig.

The excerpts below explain the precarious history of “Plimoth.” They also remind us of times spent in the company of our own family and friends—at home, on the road, or in the virtual gathering spaces of 2020.

Wishing you a happy and healthy Thanksgiving! -- PHS

After our first Zoom session my mind was stirred to searching our past history and to record what makes us up….As I was aware of you on the Zoom screen I saw the creativity which has made each of you who you are. You all have inherited a genetic history from both your mother and me. This essay, if we can call it that, is my attempt to unwrap what has made you up.

…In 2020 we are celebrating the four hundredth year arrival of the Pilgrims on the Mayflower at Cape Cod and the settling of the Plymouth colony. Your Mayflower roots have established you in the line of one of the early English settlers of this nation. You come from the Alden/Mullins line and the first female infant Elizabeth Alden born in Plymouth colony, who went on to marry William Pabodie and they had a daughter Lydia Pabodie born in 1667.

Richard and I celebrated our 45th Wedding Anniversary at Isaac’s on the Beach in Plymouth, MA. In our anniversary picture we are standing on the beach, Plymouth Harbor behind us. To the right, out of sight in the picture, was Mayflower II. We used the picture on our Christmas card that year. 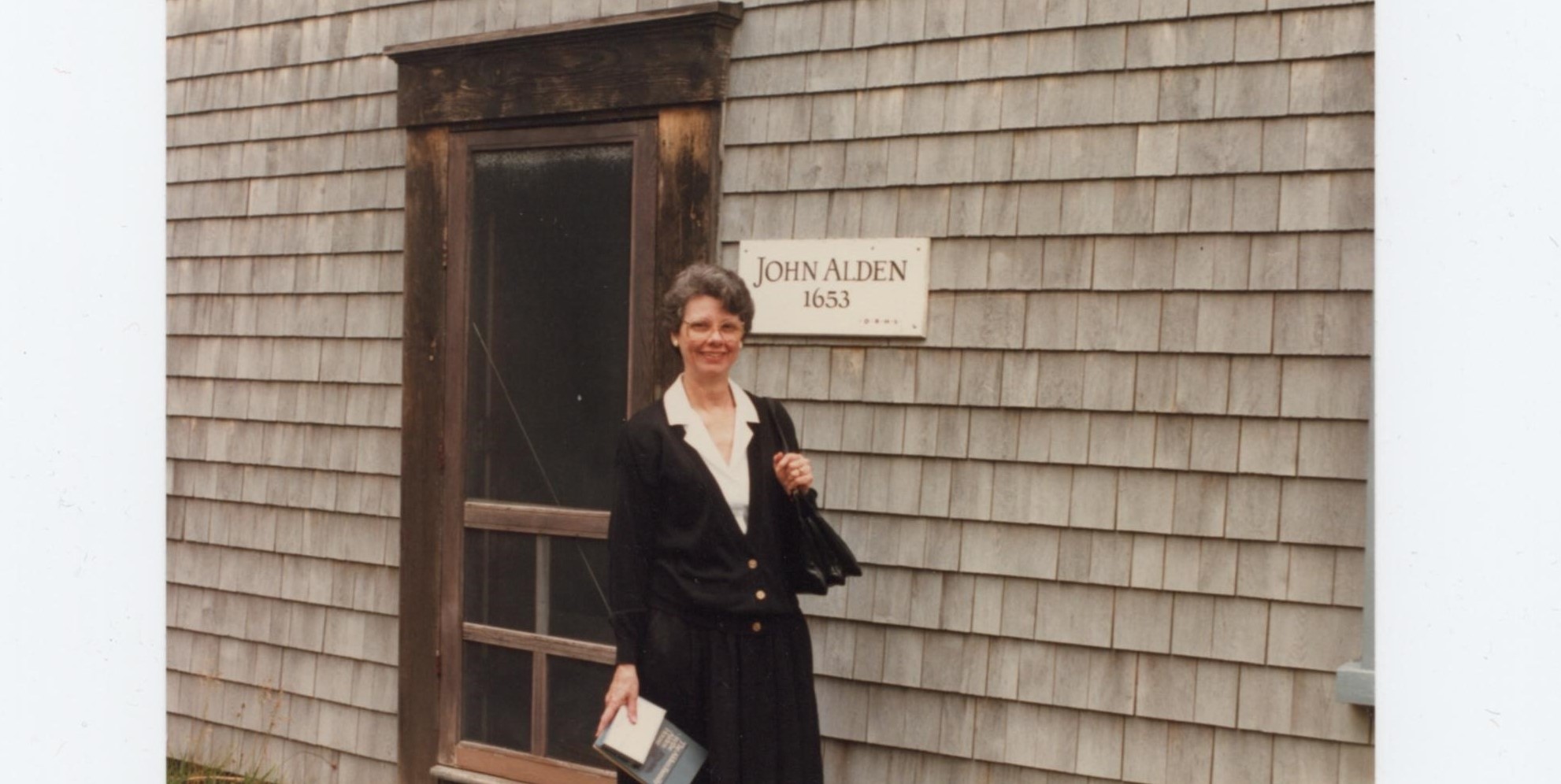 Our grandson Luke, age 6, had loved touring Mayflower II that morning, running up and down decks, imitating the children who were passengers on the original Mayflower’s famous voyage in 1620. We adults had shuddered at living in the crowded lower deck. We shuddered also at the awful days of sickness and deaths during the winter of 1621 before houses were built on the fields of a Wampanoag village, abandoned when a plague struck the area in 1616-17.

We spent Friday afternoon at Plimoth Plantation, founded in 1947 in the traditional museum style of the period. It was recreated in 1969 as a “living history” Plimoth Plantation and Wampanoag Homesite. The goal is to give us tourists a taste of Plantation life in 1627—seven years after the arrival of the Mayflower in Plimoth Harbor….

We stopped at the Alden cottage. Luke was eager to ask “John” a question, “Can I play with Elizabeth?” “It is with regret I have to say Elizabeth is not here,” was “John’s” reply in proper English accent, “Goodwife Priscilla is out with daughter Elizabeth gathering berries.” Each Plimoth “settler” was trained to respond to all questions as if it were really 1627. A disappointed Luke could only say, “Oh.”…

…In 1621 there was no guarantee that this little group of English settlers would succeed where others had failed in establishing a permanent presence in this New World.

The leaders [at Plymouth] were Separatists who had fled religious persecution in England for Holland. They were both religious and political radicals, part of a nearly 100-year-old conflict between the Roman Catholic Church and various forms of the Protestant Reformation. The Separatists’ passionate trust in God had already carried them through many trials.

Religiously and politically the Separatists were more radical than the Nonconformists called Puritans whose goal was to purify the Church of England. The Separatists believed in creating a new society rooted in the providence of God. They sought “a new heaven and a new earth.” Their wise pastor in Leiden, in Holland, the Rev. John Robinson, advised the Plymouth Separatists not only on the importance of living and working peacefully with those called “strangers” who came from London on the Mayflower but also with the [Native Americans] who inhabited this wilderness. The original leaders, John Carver, William Brewster, Edward Winslow, and William Bradford, were guided by Rev. Robinson’s cautionary words, “knowing ourselves to be men, whose property it is to err and to be deceived in many things; and accordingly both to converse with men in that modesty of mind, as always to desire to learn something better." “There is more light to break through the Scriptures than this world dreams of,” (Works, I, 37-39) words which would inspire future generations of reformers.

Another reason for the survival of this little Plymouth company was that they dared to bring their families to this wilderness. Because of the women who were part of the Plymouth community everyone ate, were nursed when sick or wounded, had clean and mended clothes, fresh food from their gardens and a home. Single persons, mostly men or orphans whose parents had died in the Great Dying of 1621, were assigned to families and benefited from being a part of a family. The women bore children for the future of the plantation. They also nurtured friendships with the natives, especially the women, and learned how to cook the new foods in the woods and waters around them and to use them as healing potions.

Over the last decades your mother and I traced the beginning of this history from the Plymouth colony down to Providence, Rhode Island. It was here that daughter Elizabeth Alden Pabodie settled after she moved from Plymouth. The daughter of the Pabodie’s, Lydia, married Daniel Grinnel. Their daughter Mary Grinnel, born when Lydia was seventeen, married Robert Lay. This is where the Lay line comes into the family. The Lays lived in Connecticut and established themselves in East Lyme and Old Saybrook….

To continue the Lay line, Jonathon Lay, offspring of Mary Grinnel and Robert Lay, married Mary Spencer in the mid-1700’s and in 1760 she gave birth to John Lay. John Lay married Phoebe Lee, who gave birth to Juliet Lay in 1801. The Axtell line comes into the family when Juliet Lay marries Henry Axtell in 1828. Henry Axtell became pastor of the Geneva Presbyterian Church in Upstate New York….

In our visit to Geneva we have photos of the Geneva Presbyterian Church which Henry Axtell served. Eunice is standing beside the grave marker of Henry Axtell. Also in the pictures are grave stones marking the graves of those in the Lay family. One of the other markers is for Hannah Cook, who has her own important story in the family. She was one of the early women preachers in the 1800s but as the story goes was shut down as ahead of her time. This story needs to be pursued [!] [Exclamation PHS]

…We re-established the connection to Buffalo when after graduation from Union Theological Seminary in New York we organized a congregation in the Town of Tonawanda in 1952. After building a church in 1955 we left the Presbytery of Western New York in 1956 to serve in the field of urban-industrial mission in the Philippines. Eunice returned in 1986 to become the Executive Presbyter in the Presbytery of Western New York.

The political creation and survival of the whole [Plymouth] community began with the signing of the Mayflower Compact in 1621 in which the men of the Mayflower pledged to create and obey the laws and government of the new colony they would create.

“[We] do solemnly and mutually in the presence of God, and one of another, covenant and combine ourselves together into a civill body politick for our better ordering and preservation and by vertue hearof to enacte and constitute just and equall lawes as shall be thought most meete for the generall good of the Colonie, unto which we promise all due submission and obedience. In witnes whereof we have herunder subscribed our names.” The Mayflower Compact, 11 November 1620 (21 November New Style)

The Compact was signed by all free adult male passengers. In addition to framing their own laws, the selection of leaders would take place by vote of all freemen. Unlike many other later colonies the voters did not have to be church members. Because Plymouth settlers were a mixture of Separatists, and adherents of the Established church, the Church of England, there was separation of the authority of church and state.

Equally important was their treaty with the Indians in the area. In March, 1621, a peace treaty was written and signed with Massasoit, chief (sachem) of the local Wampanoags. Massasoit perceived that peace with the English was to his advantage in his relationships with the aggressive Narragansets. The treaty was honored by both communities for the next 30 years. In addition, the Plymouth settlers were careful to pay for the land—and the corn—they bought from the local inhabitants.

Until 1627 Plymouth had lived under the agreement with the English Merchant Adventurers who had funded their settlement. The Merchant Adventurers owned their land, houses, and the products of their labor. While very unpopular with the settlers, this system had assured the survival of the Plymouth community until families had the skills and resources to survive on their own. The distribution of land in 1627 gave 20 acres to each family (adults and children) and single persons for their own planting. This equal distribution of land moderated the growth of inequality of income and social hierarchy. Farm sites were chosen by lot. The Alden farm would be “on the other side of the bay,” in Duxbury…. 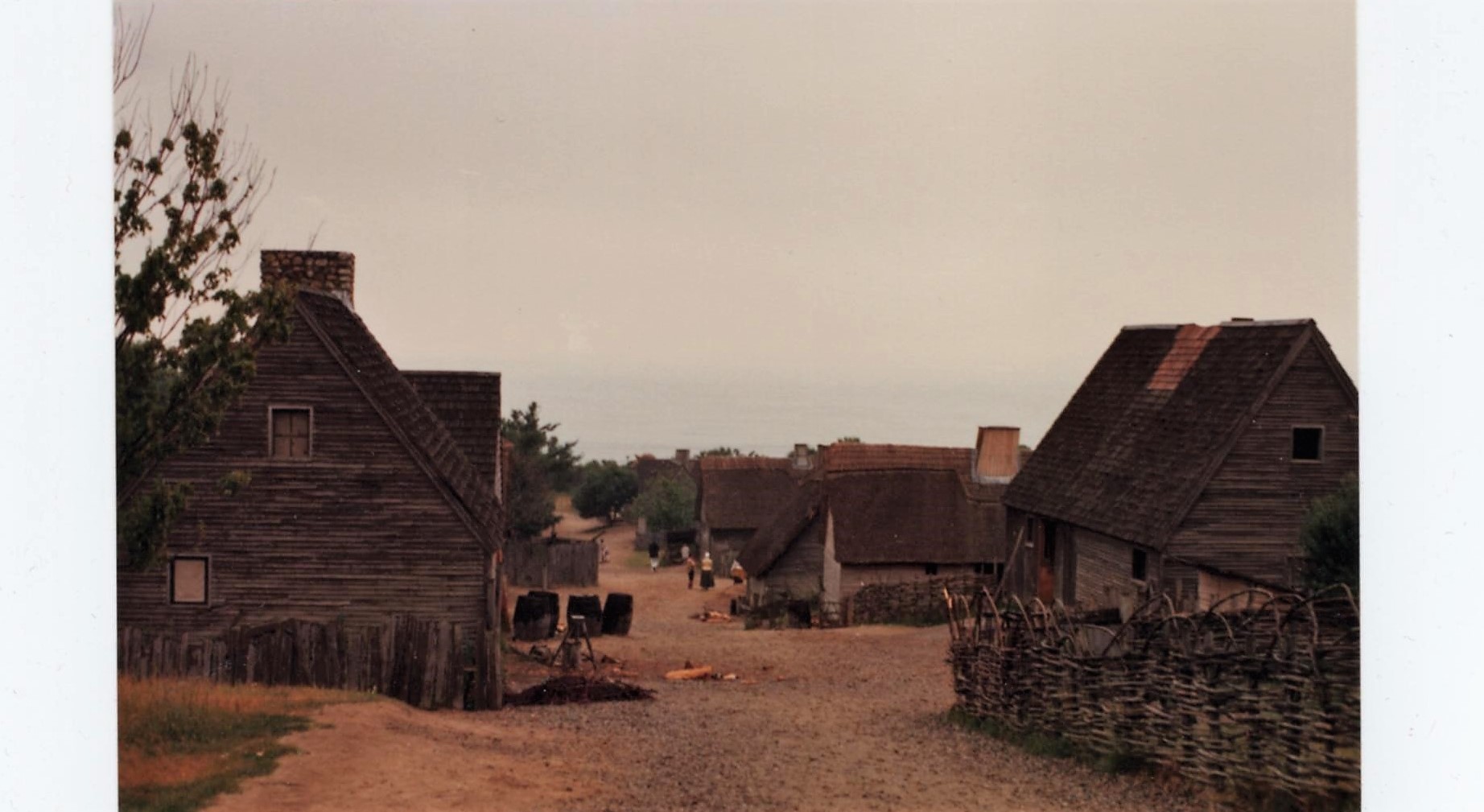 The Gift of Families to the Making of America

The first four generations of Alden descendants show great respect for those in previous generations. They use family names over and over indicating a desire to keep close family ties. The survival of their large families in spite of the dangers that surrounded them is amazing.

First Presbyterians in the American Colonies

Blogs by or about Eunice and Richard Poethig