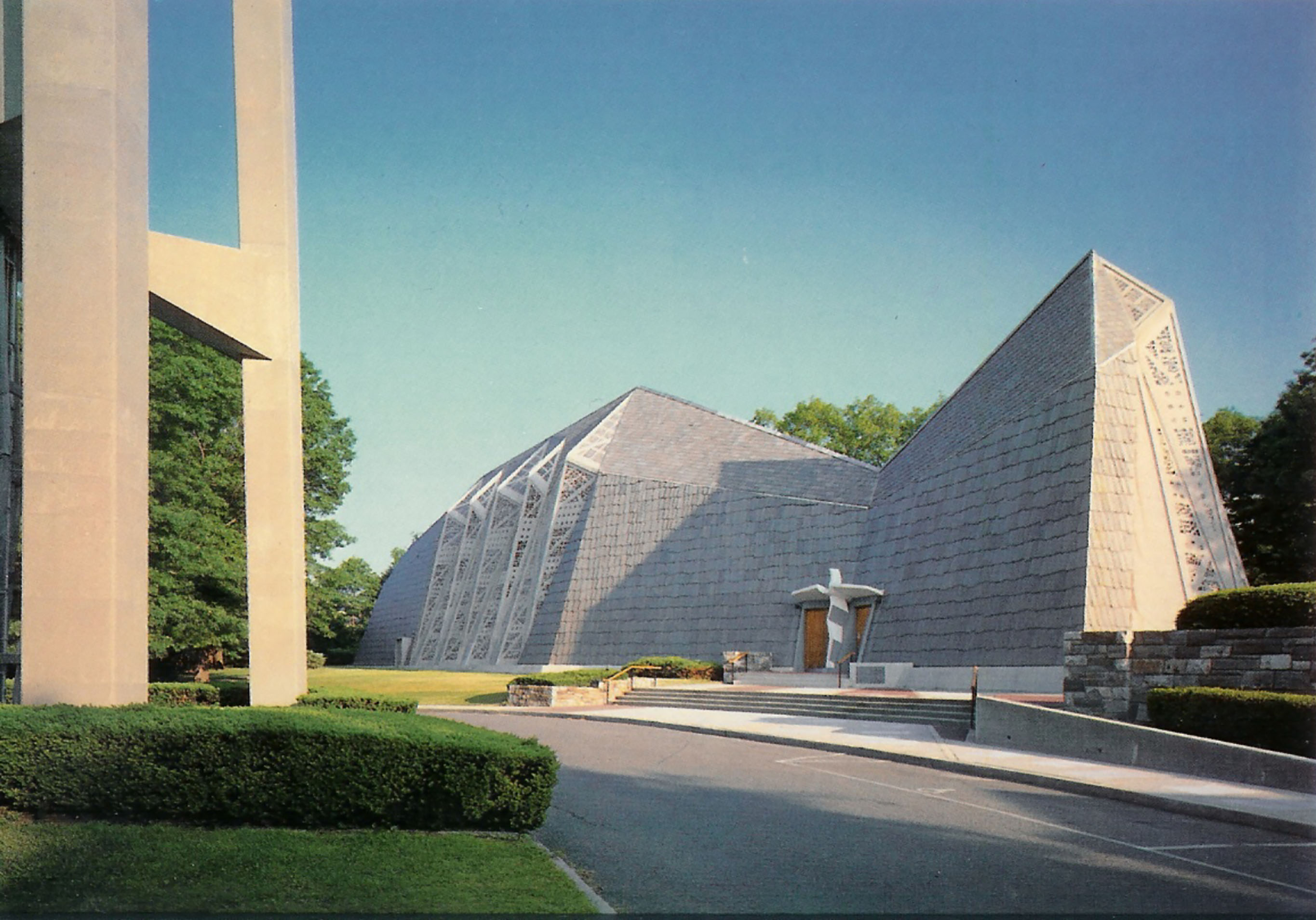 Each of the nearly 2,600 NHLs represents an outstanding aspect of American history and culture.[1] Just a few weeks ago, on January 14, 2021, the First Presbyterian Church of Stamford, Connecticut was listed as a National Historic Landmark. It marks the eighth Presbyterian church so honored, and the first designed in a modern architectural idiom.[2] The National Park Services NHL executive summary notes its significance:

First Presbyterian Church, also known as the “Fish Church,” is an important and singular work by Wallace K. Harrison (1895-1981), a major American Modern architect. The church, considered by Harrison to be his most successful accomplishment, exemplified both the architect’s strength as a master planner and his personal approach to Modern design that introduced significant innovations in construction technology to American architecture.[3] 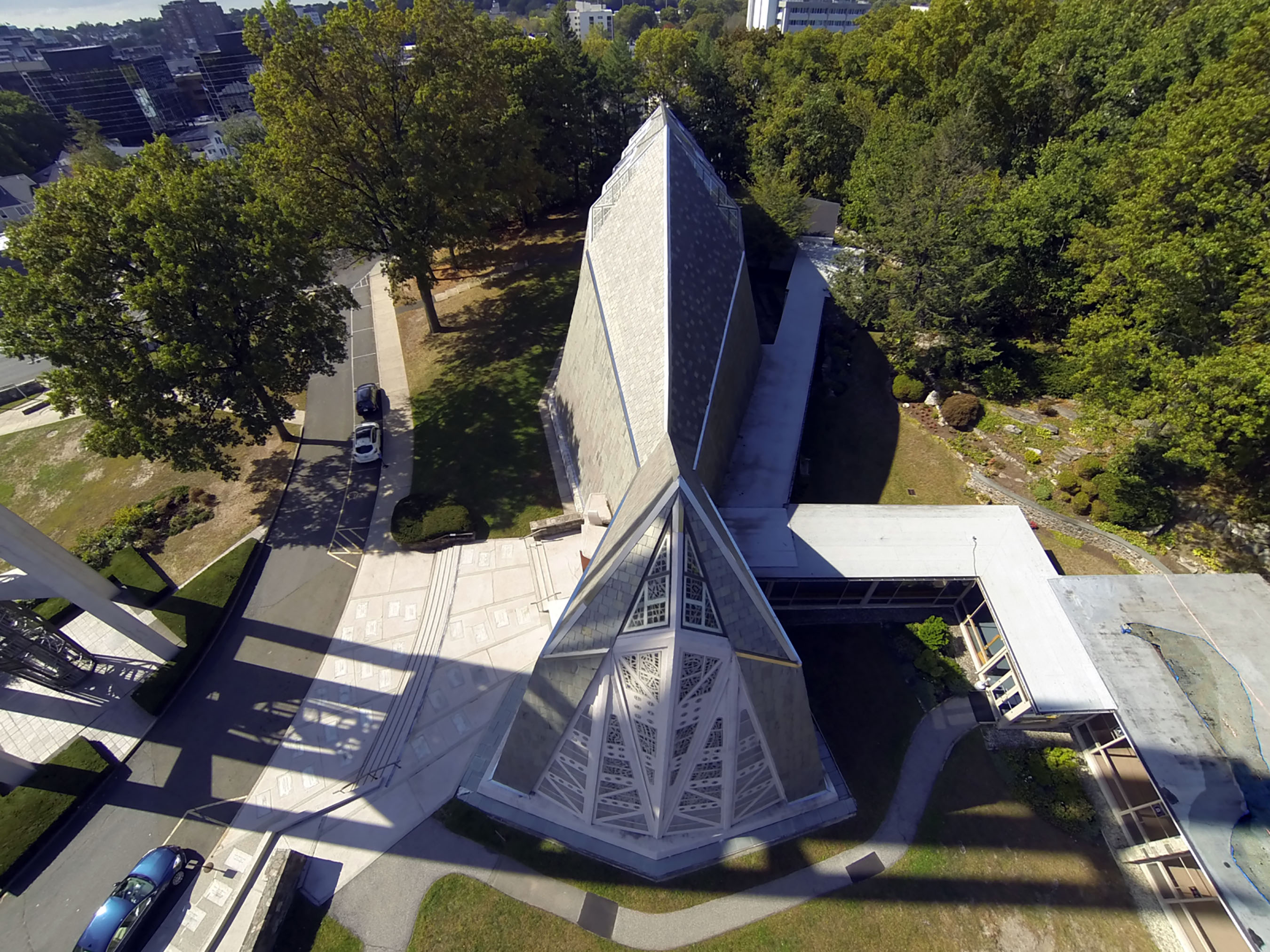 In the years following World War II, First Presbyterian Church of Stamford’s membership grew to its largest in its history, with more than 1,500 congregants.[4] Completed in 1884, the Stone Church, the second to be serving this congregation, was unable to properly accommodate a congregation of this size. To address this issue, a Building Committee of the church was organized under the chairmanship of Stamford attorney Walter N. Maguire and met for the first time in July 1952.[5] With recommendations from outside advisors, the church engaged Dr. Elbert Moore Conover as a church building consultant. Conover, an ordained Methodist minister, had become known as an expert in church planning and construction through both his writings, including “The Church Building Guide” (1946) and “The Church Builder” (1948), and his role as executive director of the Interdenominational Bureau of Architecture.[6] 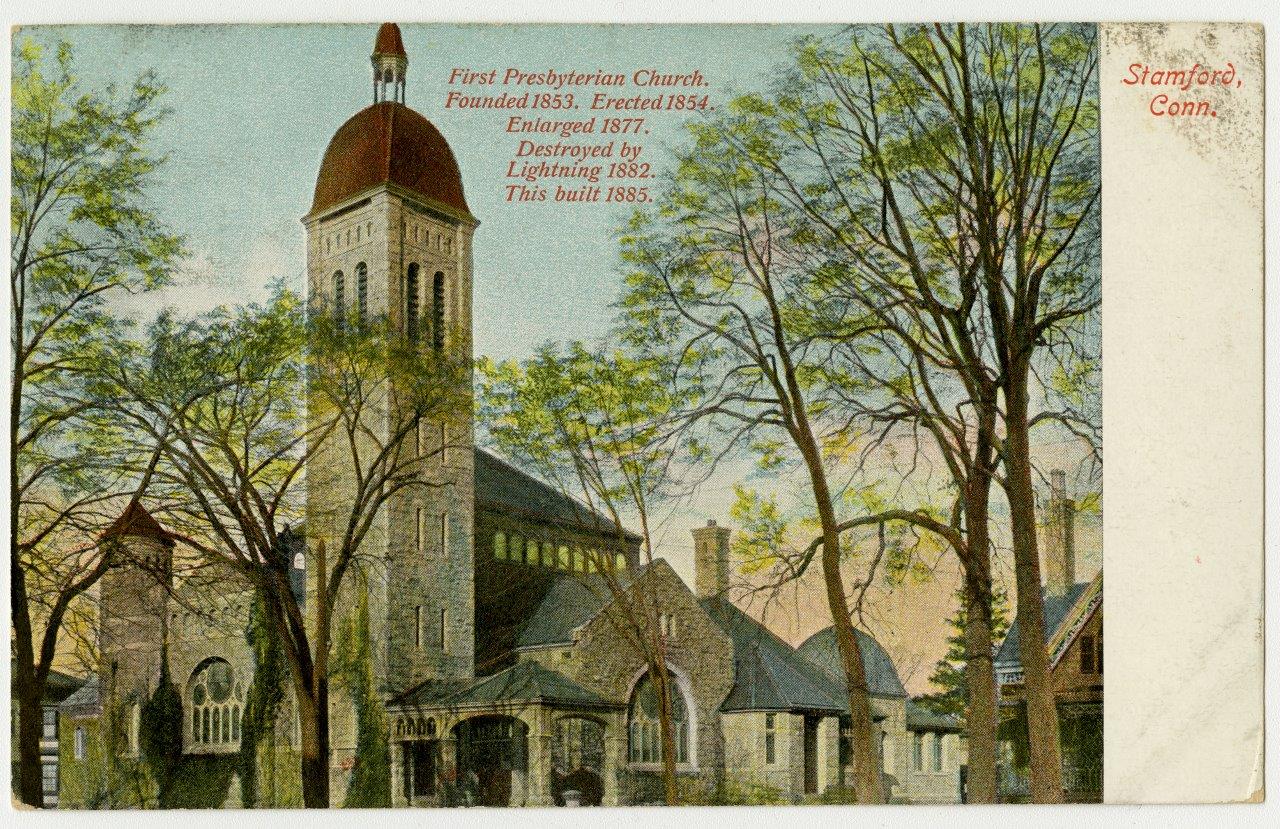 The Committee, guided by Dr. Conover, considered several designs for the sanctuary. The first design was a “Byzantine style” edifice by architect Frederick Rhineland King, but the Committee decided that King’s use of stone would be too costly.

Much of the Committee preferred a neo-Georgian design, perhaps thinking of the recently constructed St. John’s Lutheran Church in the northern section of Stamford. 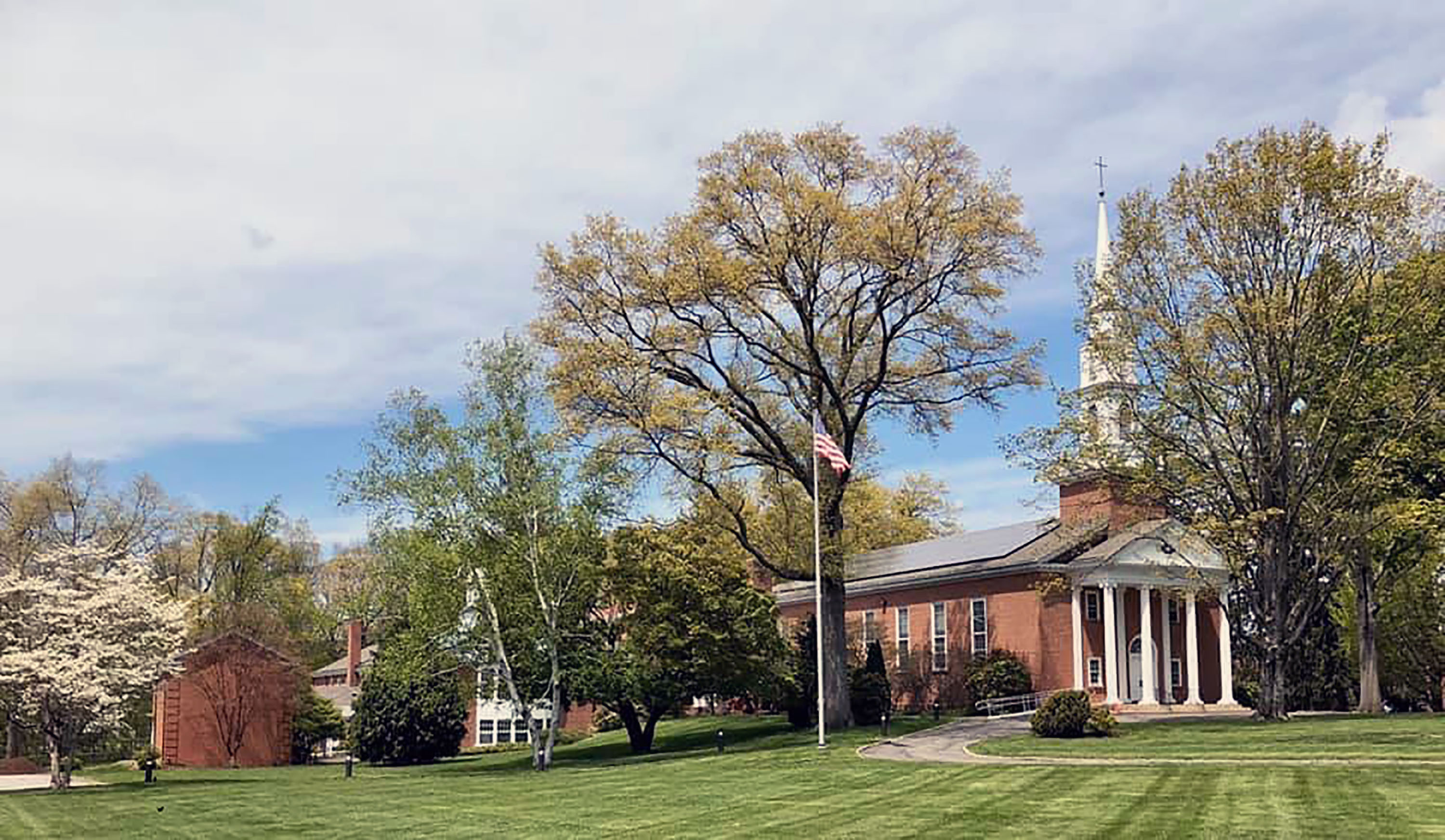 Yet, two members of the Committee, Emma Light and Benton Grant, viewed the selection of an architect as a chance to express a modern architectural style. Grant had seen architect Alden Dow’s St. John’s Episcopal Church in Midland, Michigan and had been so impressed that he lobbied to convince the Committee to choose a modernist architect. 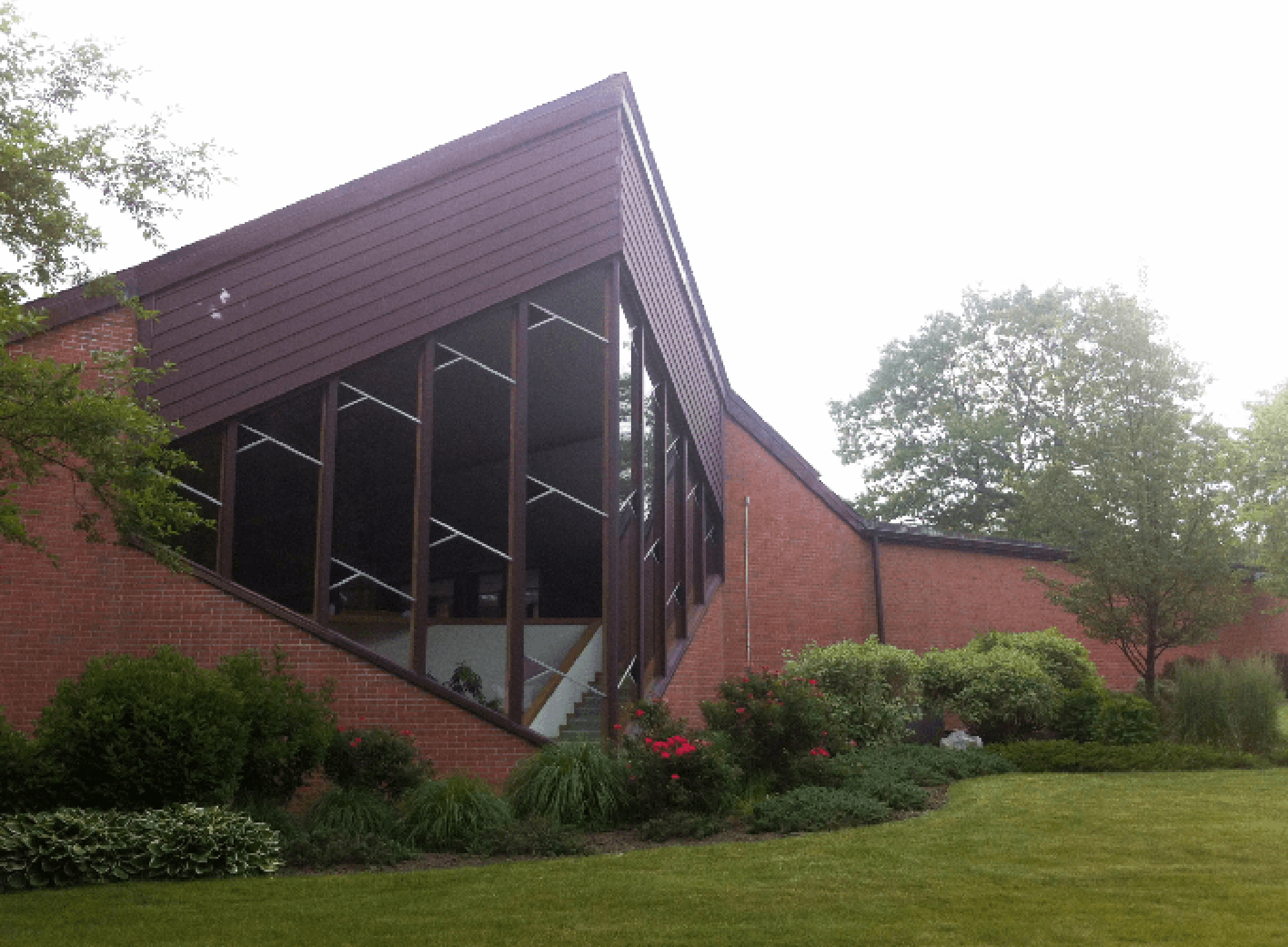 Seeking a “top drawer” architect, the Building Committee contacted three additional firms not on Conover’s list. Based on a later interview, the firms were believed to be Alden Dow, O’Connor and Kilham of New York, and Wallace Harrison of Harrison & Abramowitz. In October 1952, the Committee awarded the contract for the design of the sanctuary to Harrison.[7] 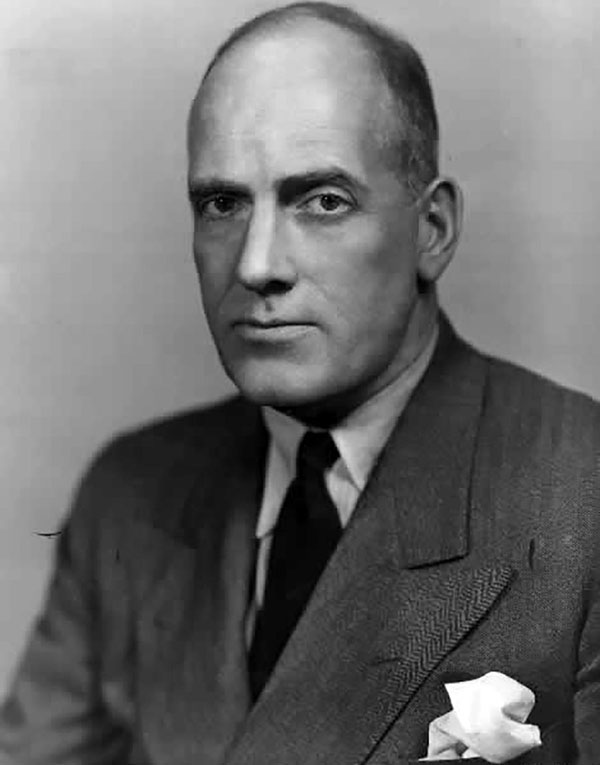 Born in Worcester, Massachusetts, Wallace Kirkman Harrison attended Worcester Polytechnic Institute where he received his initial architectural training. When he turned twenty-one he moved to New York and worked as a draftsman with the noted architectural firm of McKim, Mead & White while taking classes with the architect Harvey Wiley Corbett at Columbia University. After a stint in the Navy during World War I, he studied at the Ecole des Beaux-Arts in Paris.

Returning to the United States, Harrison first worked for the New York firm of Bertram Grosvenor Goodhue and subsequently went into partnership with Corbett, his former teacher. His firm, Corbett, Harrison and MacMurray contributed to the design of Rockefeller Center, and in partnership with the architect J. André Fouilhoux, designed the Trylon and Perisphere, the symbols of the 1939-1940 New York World’s Fair. From 1945 to 1976, Harrison partnered with Max Abramowitz. Among the Harrison & Abramowitz firm’s better-known commissions were the United Nations headquarters, the Lincoln Center for the Performing Arts, and the Nelson Rockefeller State Mall in Albany.[8] 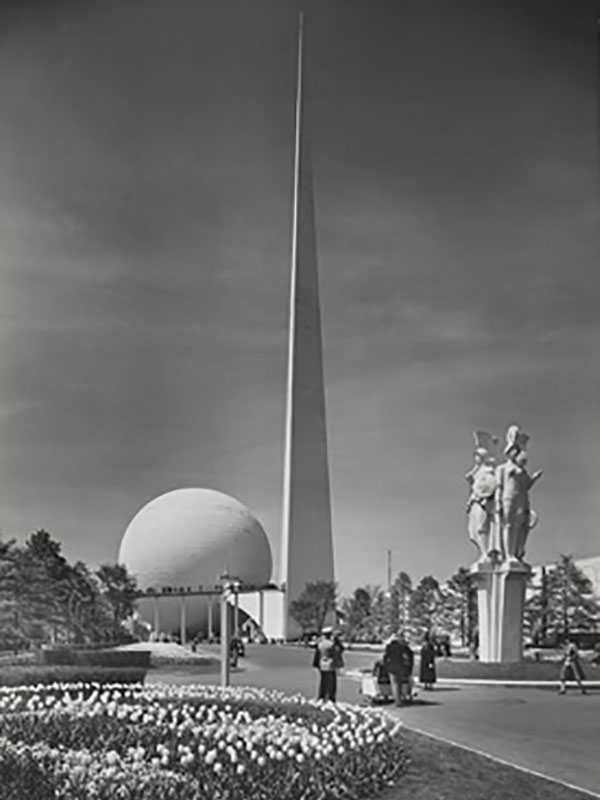 Trylon and Perisphere, prominent features of the 1939 NY World's Fair, image courtesy of the Museum of the City of New York, 1939.

While the commission for the First Presbyterian’s sanctuary would go to Harrison, the Parish Unit, housing offices, classrooms, and meeting spaces would be designed by Willis Mills of the Stamford firm of Sherwood, Mills and Smith.[9] Although the reason for the retention of a second architectural firm to design these elements of the complex is not known, it may have been in recognition of the Stamford firm’s extensive experience in school construction, experience brought to bear in their design for the Christian education area.

Though the Committee had hoped to retain the services of an architect who had experience designing churches, the Stamford church sanctuary was Harrison’s first religious commission. Harrison worked closely with the Rev. Dr. Joseph F. Campbell, pastor of the church, on the design process in which modernistic elements were combined with traditional symbols. Campbell later noted:

Although this is more advanced than any known church of our denomination, the eternal symbols of our spiritual values will be preserved. People will find the communion table, the pulpit and the lectern where they expect to find them. The acoustics and visual qualities of the church will, I am told, be perfect.[10]

In interviews, Harrison indicated some of his structural ideas for the sanctuary: “The church in Stamford is, I think, the kind of church the old builders would have built if they had modern materials.”[11] 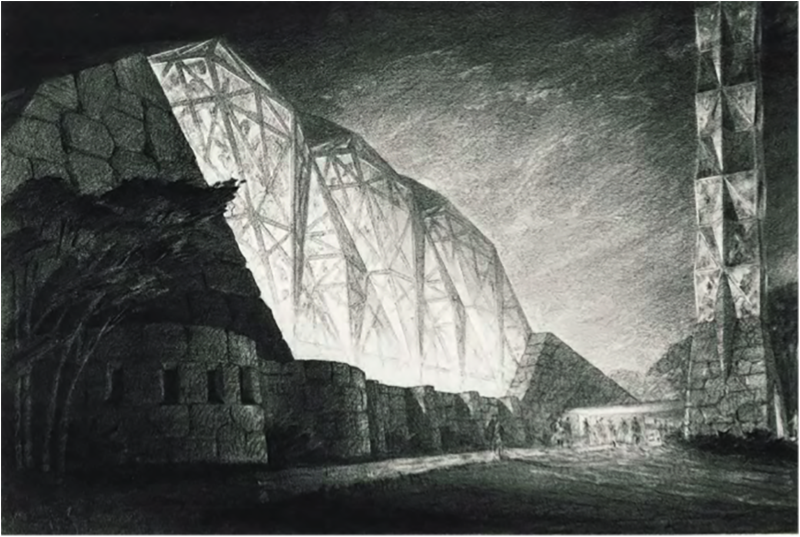 An early sketch of the church shows a design with folded glass panels emerging from a castle-like, massive stone base. Harrison changed directions in subsequent designs, using a much lighter structural system, precast concrete, and thin shell construction:

I wanted a structure as clear and honest as Gothic. I groped and fussed for a year or two. But I don’t think, right off, you should ever know too clearly where you are going…. I was intrigued with folded concrete. It would span the space without supports, At the time nothing of the kind has been done in this country. We didn’t have the engineers and I had to get Felix Samuely, a British engineer, who had done two or three of these things in England. He took two trips here and I went over twice on this job.[12]

The final design set the church on a low concrete base and sheathed the end walls in slate. "The resulting sanctuary is a “single-story, reinforced thin-shell concrete building surfaced in dark gray slate around large expanses of 152 exposed precast concrete panels holding the multi-colored dalle de verre (thick pieces of glass set in mortar).[13] An article in The New York Times at the time of its completion described the sanctuary: 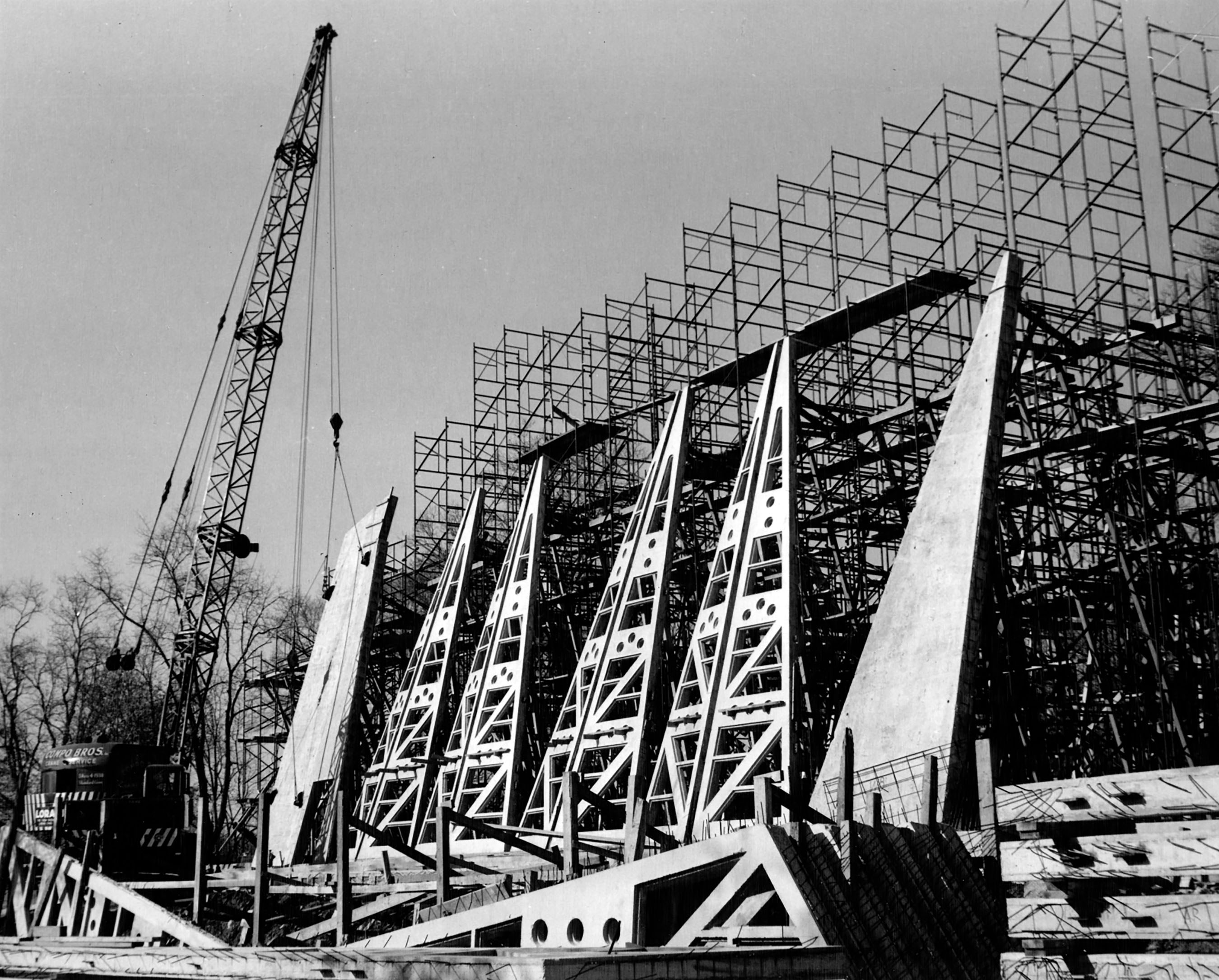 A radical departure from conventional church architecture, the edifice rises sixty feet at its highest point. Its sharply sloping precast concrete walls are embedded with colorful inch-thick ruby, emerald, amber, amethyst, and sapphire glass from France.[14] According to the architect, the effect of entering the sanctuary is akin to living inside a giant sapphire.[15] 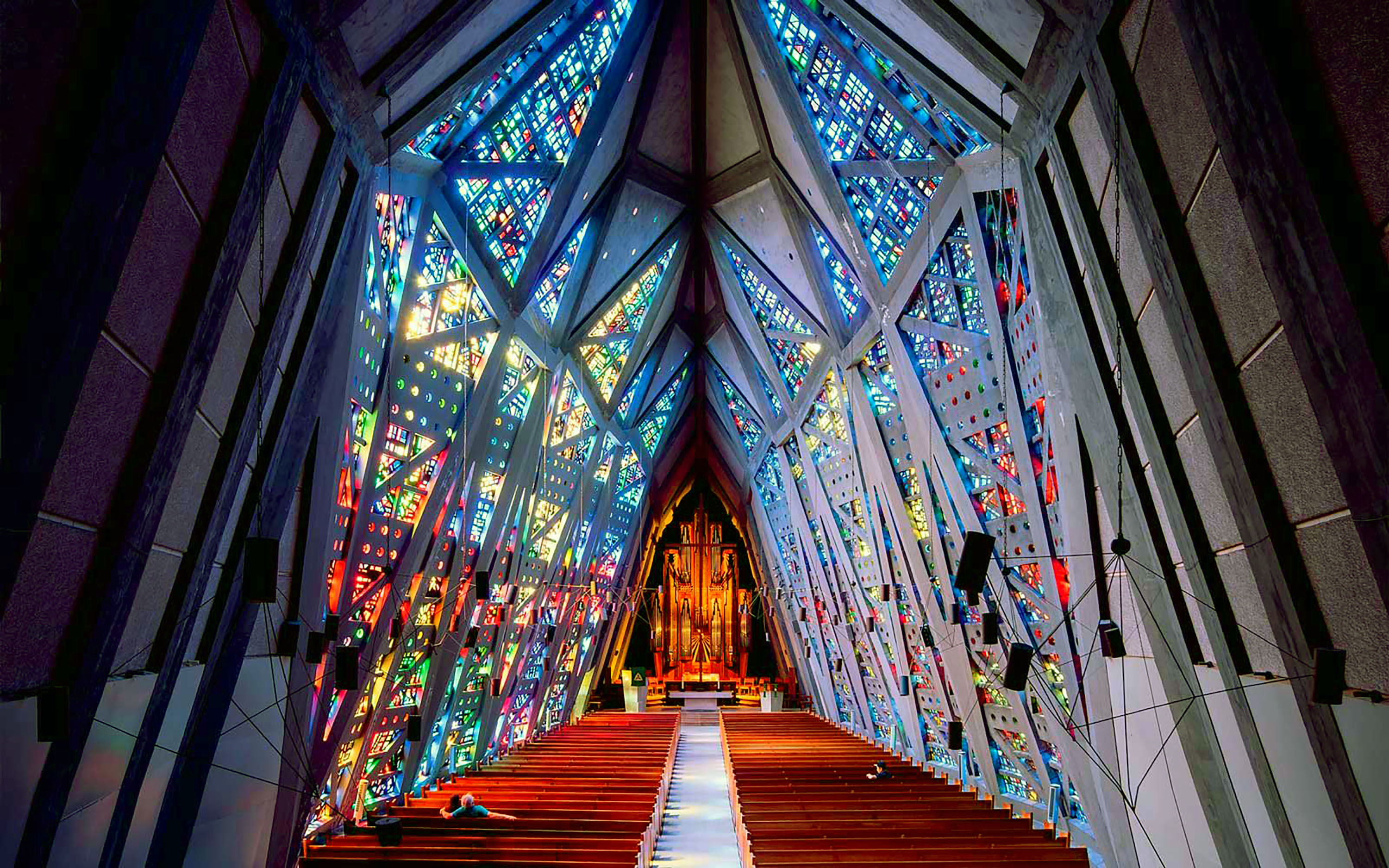 The introduction to the Conservation Management Plan of the Church contains a concise description of the space:

The Sanctuary with its fish shaped plan is constructed out of large precast concrete panels that are leaning into each other at various angle and directions forming the structural backbone. Over all the impression is one of folded and slanted planes. Openings in the precast are filled with glazed sections made in dalle de verre, a modern technique using chunks of glass to evoke the medieval tradition of stained glass. FPC’s dalle de verre consists of irregularly shaped and faceted sections of colored cast glass placed in a matrix of either concrete or epoxy and formed into panel sections. These panels in turn are placed in openings left in the precast…. Where the precast is not filled with glazed panels, the solid precast panels are covered with slate.[16]

Wallace Harrison also designed the carillon tower, a freestanding structure constructed of poured-in-place reinforced concrete. Precast concrete stairs extend up to teak-clad enclosures that house the carillon’s 56 bells, on two levels. The console is in an enclosed space between the two levels.[17] 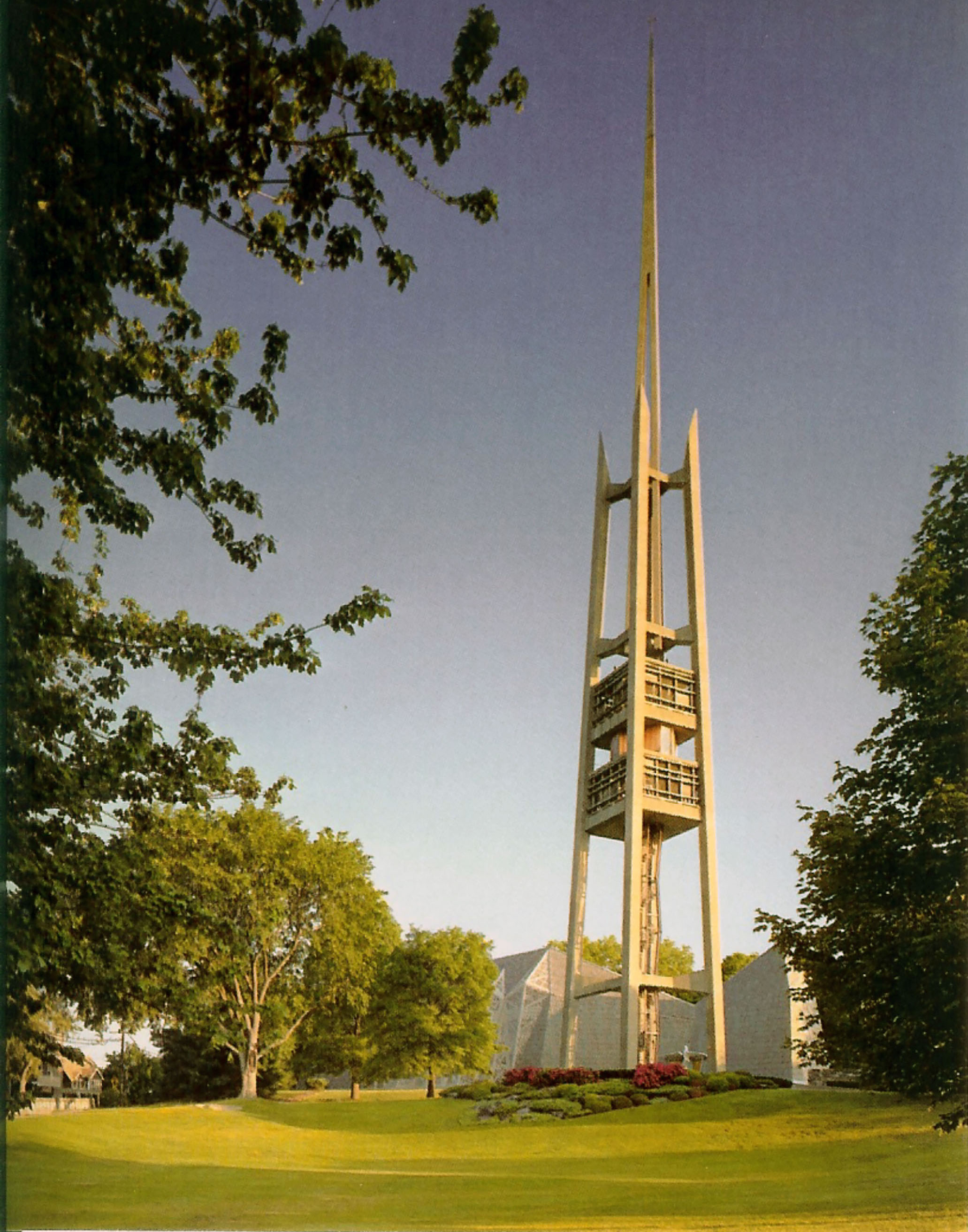 The church has continued to attract attention since the time of its construction. Renowned New York Times architecture columnist, Ada Louise Huxtable, listed it as one of “Ten Buildings that Say Today.”[18] In 1959, it was featured in a Museum of Modern Art exhibit, titled “Architecture and Imagery: Four New Buildings.”[19] The Register of Modern Architecture, hosted on the do.co,mo.mo_us website, includes the church.[20] In 2017, the firm of Prudon & Partners of New York City prepared a Conservation Management Plan for the church, using funds granted by the Getty Foundation. Based on this plan, the firm of Hoffman Architects devised strategies to address moisture problems and to repair moisture-related damage.

[For further information on the Fish Church: he National Historic Landmark nomination is available on the Internet here; the conditions assessment report here. The Presbyterian Historical Society holds several historic publications describing the history and design of the church, as well as a history file for the church in the congregational vertical files: RG 425.]