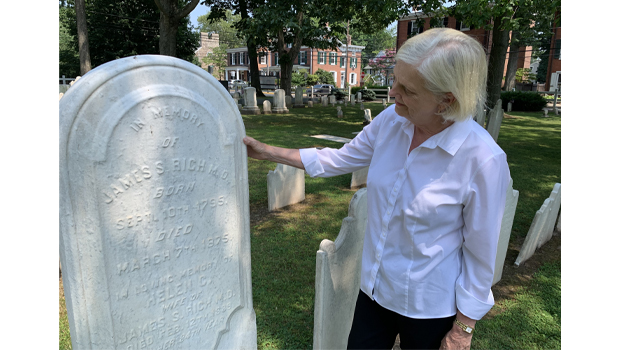 It had been a long day of reading 200-year-old Trustee Records and taking photos with my phone. As I was packing up to leave, I thought, “there are a lot of blank pages in this 1815 book, let me just flip through to make sure they are actually empty”. Lo and behold, there it was hidden--the original map of our historic graveyard along with the lot assignments. I was delighted to find these records, as I had been seeking them for quite a few years and not sure if they even existed.

This is just one of the important discoveries I have made at the Presbyterian Historical Society in a quest for records associated with the historic Doylestown Presbyterian Church graveyard (circa 1815). After joining the church History Committee in 2010, I was immediately drawn to the graveyard. It is the gateway to our church and visited by many, situated near the center of town. It is the burial place of most of the early citizens of Doylestown, some of whom are historically prominent. The original plan was to develop a new map and guide for visitors. It turned into so much more. I never imagined the journey on which I was about to embark. 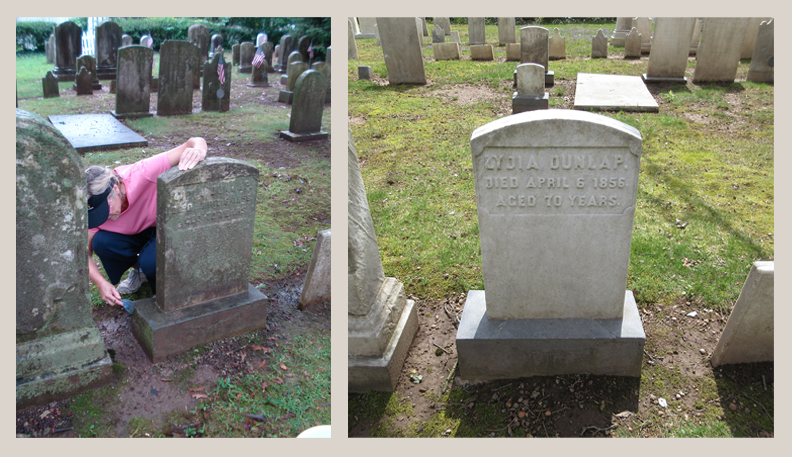 I soon discovered that our church burial records were incomplete and spread among many sources. Starting with the most recent physical reading of headstones (1976) and map, I began work to locate all records related to our graveyard and consolidate them into one data set for future generations--this has involved multiple searches using online tools, and visits to museums and archives such as the Presbyterian Historical Society. Currently there are 600 known burials, several of which were recently discovered. The work is ongoing.

I am so thankful that previous members of our congregation thought to store and preserve our oldest records at PHS and for the wonderful staff there who have helped in so many ways. A highlight in research occurred in 2018 when the History Committee made a field trip to PHS. This was a fun experience, which I would highly recommend. We received a tour of the PHS facilities as well as tour of the Old Pine Street Church and graveyard next door--both of these places reside in the historic district of Philadelphia. The PHS staff surprised us with an artifact, a wooden board, at least 150 years old that displayed a map of the graveyard showing burial lots. One side showed the original church building c. 1815 and the other showed the current church building, with a larger footprint c. 1871. 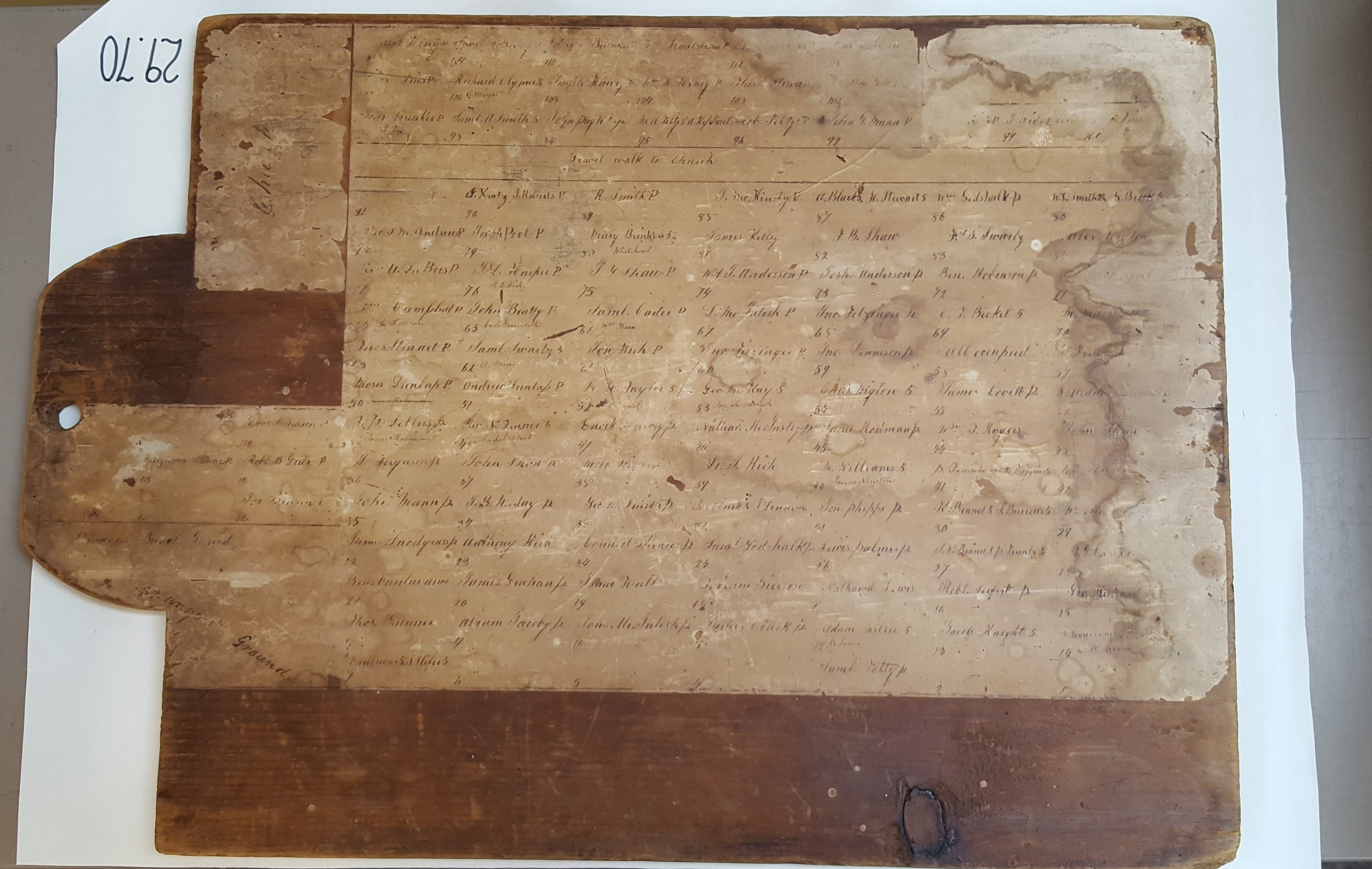 Board discovered at PHS that contains a map of the graveyard.  Photo courtesy of Doylestown Presbyterian Church.

Another key find at  PHS was a mid-20th century ledger, which contained a list of known burials, plus notes from descendants of lot owners. Thankfully, our church History Committee was able to utilize PHS digitalization services for this ledger allowing me to study this book without traveling to Philadelphia.

As I was researching the burials, I became aware that our headstones were mostly unreadable due to biological growth and dirt accumulation. Many were in a deteriorated state, mostly made of soft marble, and over 200 years old. With the support of our Property Committee, I then set out to clean, inspect, document, and obtain repairs for the headstones. 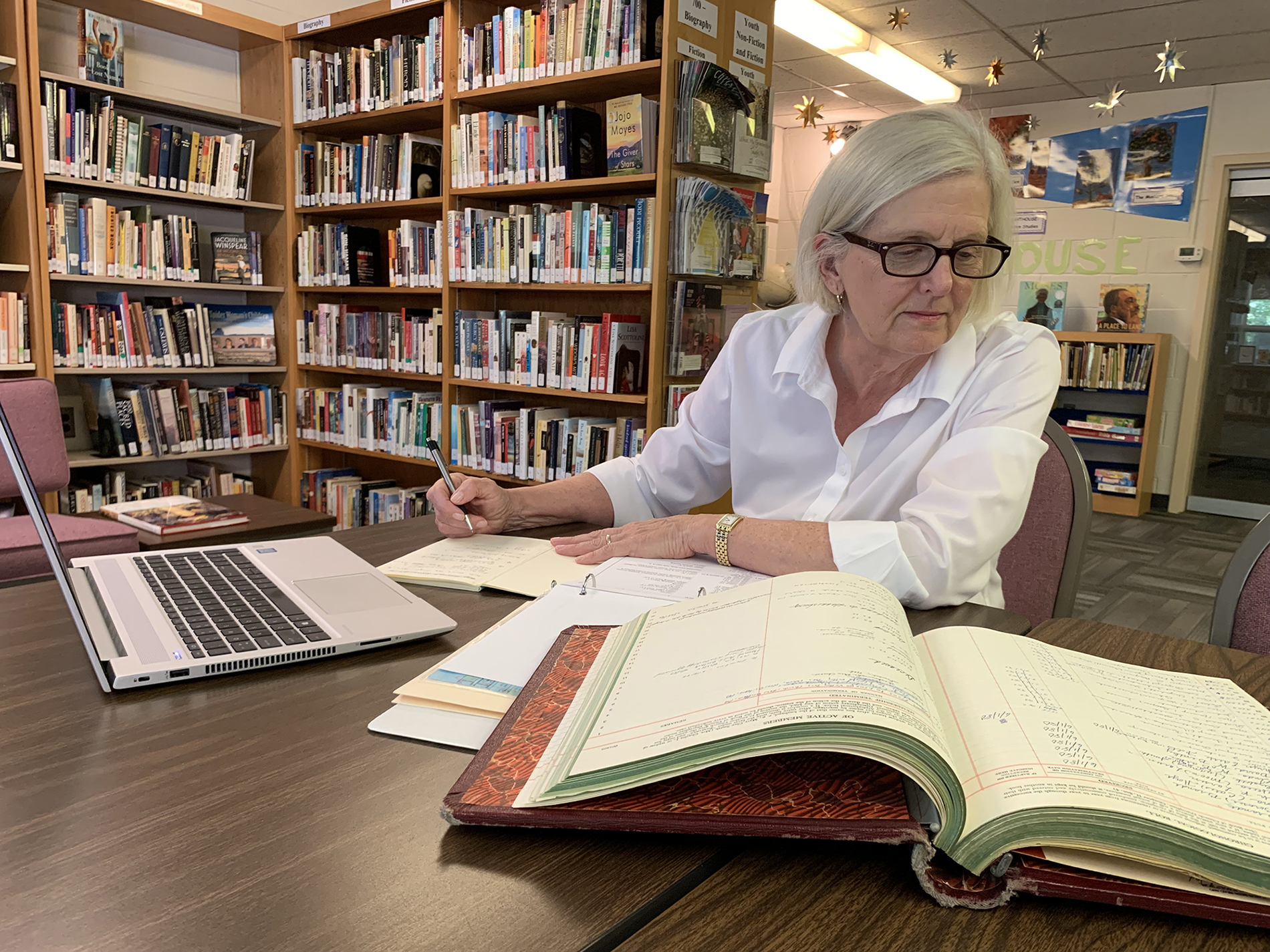 After attending several days of training on historic preservation techniques for burial monuments, I assembled a team of volunteers. Over two summers, we carefully hand-cleaned 515 headstones. This helped us discover unrecorded burials, and I was able to correct inaccuracies in previous readings. Multiple pictures of each headstone were taken before and after cleaning--I am now advising an Eagle Scout candidate who is working to GPS-mark the lot locations and develop an interactive map for visitors. I am also working to make minor headstone repairs using preservation techniques and prioritizing the needed major repairs, which will be completed by a preservation-minded contractor. 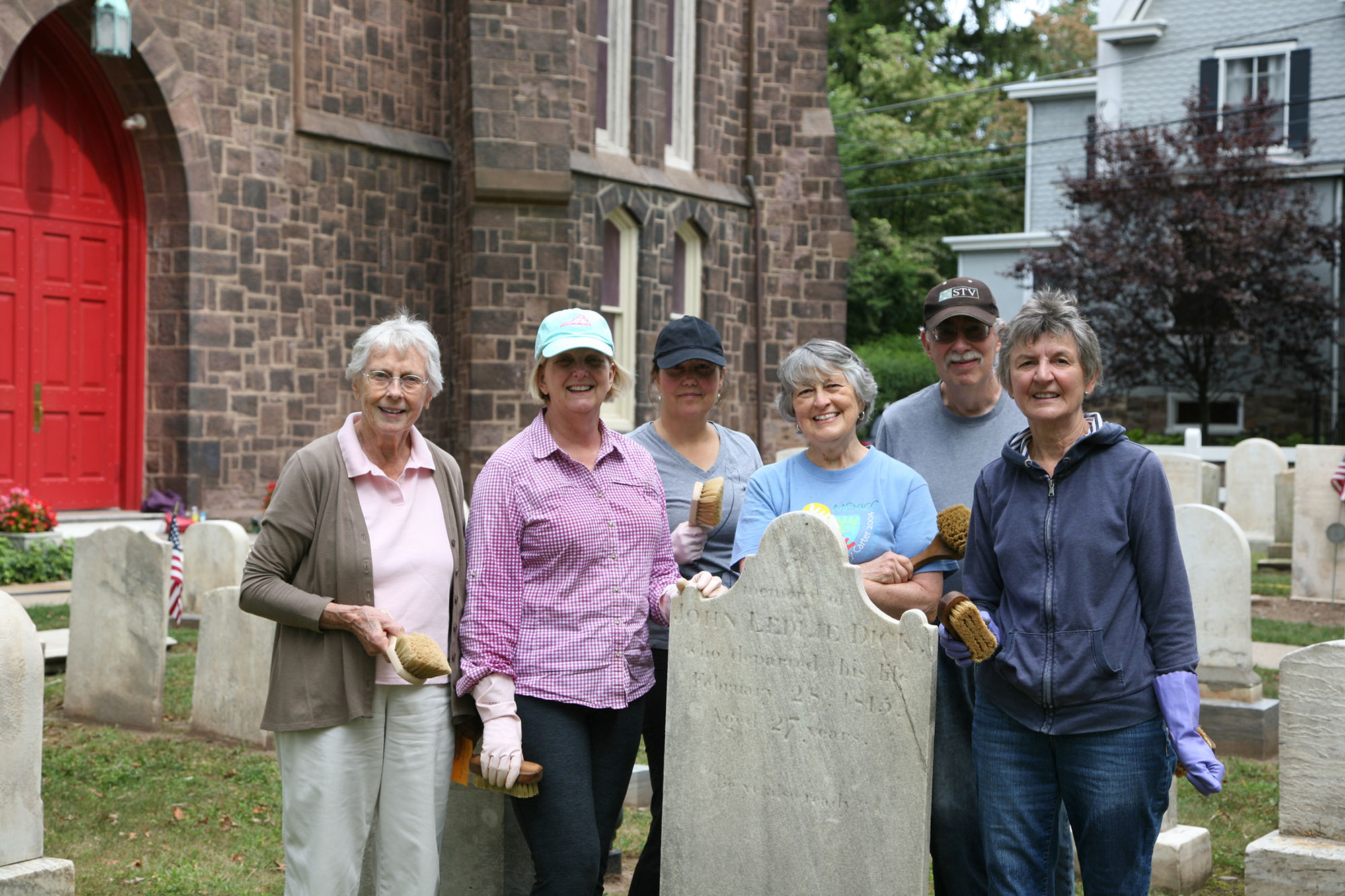 I have been energized by this work and feel happy to play a part in preserving the history of our church while also honoring the saints buried in our graveyard. As I reflect on this journey of discovery, I would like to encourage others to explore the history of their own church. Each body of faith has a story to tell – and often it can be enriched with some dedicated digging. 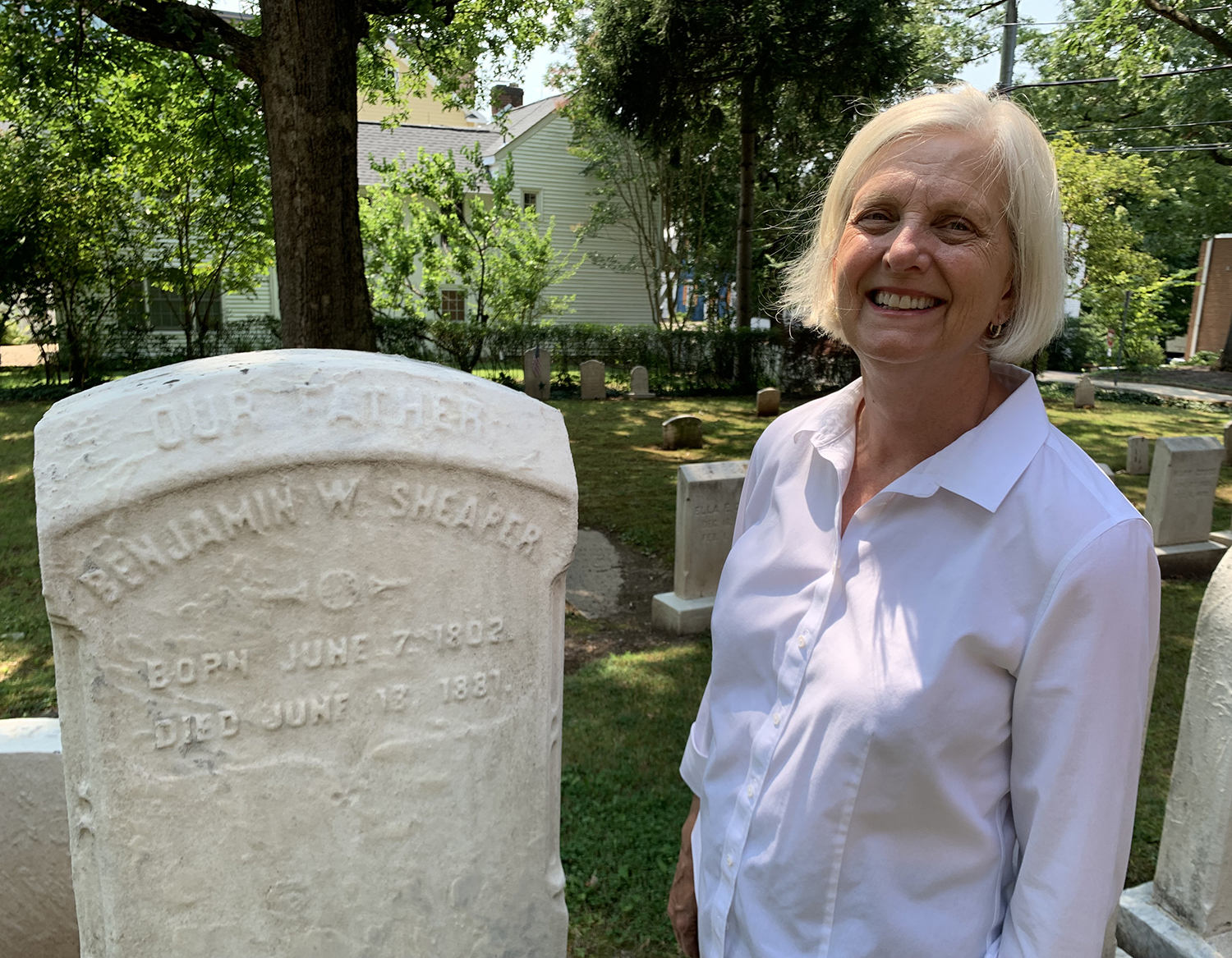 --Holly Heath Mullin has lived in historic Bucks County PA for over 30 years.  A native of Virginia, she graduated from James Madison University with a dual degree in Marketing and Management. After several years work in pharmaceutical manufacturing, Holly retired to raise her sons, while also working in volunteer leadership positions, focusing on faith, education, and fundraising. Holly and her husband Bill are both Elders at Doylestown Presbyterian Church. She has served on many church committees, most recently the History Committee where she has been involved for 10 years.