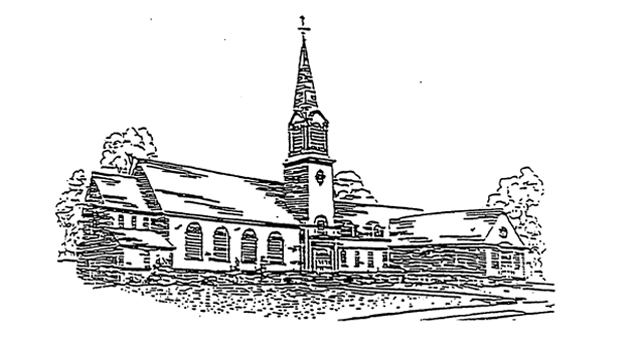 The Presbytery of Chester authorized its Committee on Home Missions to organize one of its projects as the First Presbyterian Church of Yeadon, at Holly and Bailey Roads, on November 30, 1924.  Its location, just west of the city, made it attractive to people who wanted to get out of West Philadelphia and still be conveniently near to commute to work in the city.  Growth was hindered by the Depression, but after WW II the community grew quickly.  So did the church.

In the early 1940’s, the church kept up a series of heartwarming correspondence with their many members in active duty.  The collection of cards and letters continues to encourage and stir up wonderful memories.

In 1950 there was a groundbreaking ceremony for a larger church.  On February 18, 1951, the dedication was held for the completed church, tower and carillon bells, and new Scout room.

In 1960, the church had 1034 members and 312 enrolled in its church school.  Then the Protestant push out of West and Southwest Philadelphia was succeeded by Roman Catholics moving from the same areas.  Later, African –Americans moved to Yeadon.  The effect of these population changes on the religious mix of the community is reflected in the membership and church school enrollment statistics of the church between 1960 and 1990.  During this period, the Yeadon Church began its transformation from being a totally white congregation to an integrated, diverse, and multi-cultural congregation.

In December 1994, the Rev. Frank Stephens, Jr. was ordained as the “First African American Pastor in a suburban Church in the Presbytery of Philadelphia”.  The current congregation is primarily African American; and includes members born in Africa and the Caribbean. It is served by a Hispanic Pastor, in the person of Rev. Adan Mairena (who also serves the West Kensington Ministry).

Over its ninety-three (93) years, the church received 2475 into membership.  With changing demographics, death among older members, and general decline in the membership at mainline denominations, the active membership stands at forty as of 2017, with an additional dozen who worship at the church regularly, and are active participants in the life of the church.

The present congregation is a small, warm, and friendly one that welcomes all persons to participate in the worship, life and service of the church.

The church has had numerous vital outreach programs and several very prominent positions throughout the years.  One of its elders, Wm. T. Kerr, had worked for years to make Flag Day a National Holiday.  His efforts came to fruition in June 1949, when President Harry Truman signed the observance into law for June 14th.

Currently, the Yeadon church is home to a Day Care Center, chartered Boy Scout Troops, a religion-based Afterschool Program, an Alcoholics Anonymous group, a couple other community outreach groups; and participates in the Food Cupboard at Lansdowne Presbyterian Church.