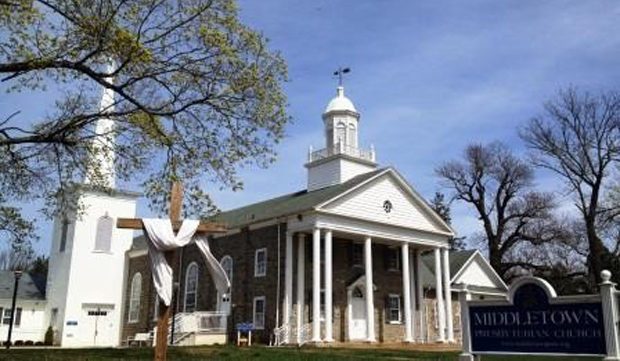 Middletown Presbyterian Church pre-dates the birth of George Washington by 12 years and the Revolutionary War and the Declaration of Independence by one-half century.  The church is recognized as one of the oldest places of worship in the country, standing a mere 5 miles west of where William Penn landed.

It was first constructed as a small log structure by Scots-Irish settlers who met in 1720.  Most likely the worship meetings were held in the home of landowner Robert McClellan.  Originally, there were no musical instruments or choir.  For singing, a tuning fork was used.  In 1735, Dr. Isaac Watson sent Richard Baxter’s Christian Directory and a book of hymns from London to the “dissident congregation at Middletown”.

In the beginning, the church was part of the New Castle Presbytery.  In 1816, Middletown Presbyterian was moved from the New Castle Presbytery to the Philadelphia Presbytery.  In 1729, a frame building was constructed, and replaced in 1766 by a stone building, which remains today as Martin Chapel.  The first Sunday school was established in 1835 and continues today for all ages.  The large stone colonial sanctuary was added in 1924.

The cemetery is a resting place for patriots and soldiers from every war.  For example, two well-known soldiers are Brigadier General Persifor Frazer (Revolutionary War) and Brigadier General Charles Leiper (Civil War).  In addition, slaves and notable parishioners (e.g., Habbersetts, Howarths, Leipers, Riddles, and VanLeers) are interred throughout the cemetery grounds.

In its nearly 300 years, Middletown Presbyterian Church has had just 15 ordained pastors.  In the early years, MPC was the only Presbyterian Church for 15 to 20 miles and used itinerant pastors to administer to parishioners’ needs.  Seven of the 15 pastors are interred in the cemetery.

1873 – Parishioner James Howarth, Esq. requested a copy of the Presidential Thanksgiving Proclamation from President Grant.  These proclamations are read yearly at the Thanksgiving services (8 readers to date).

1966 – The current sanctuary was enlarged and an administration wing was added.

1983 – A bus ministry was started which now services 4 retirement homes.

Middletown Presbyterian Church continues to be an innovator in outreach and missions.  We support missionaries worldwide.  Two of our own parishioners are presently in Thailand.  Others MPC programs include:

·         Release Time for children in an adjacent public school