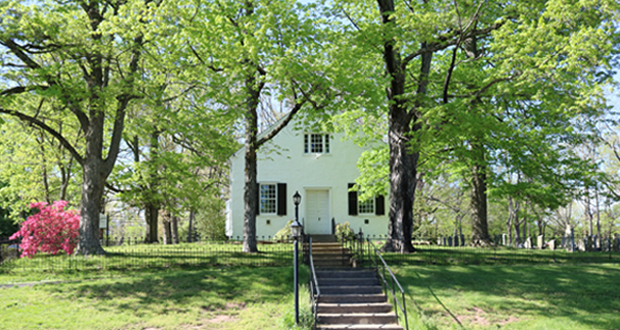 During its 292 years of history the church has been known by three different names:

Seeking religious freedom, some 6,000 Scots-Irish debarked at Philadelphia in 1720; one small group ventured north and settled in the Bedminster wilderness near a creek called Deep Run. These immigrants were Presbyterians from Scotland, but because their forebears had spent a hundred years in Ireland, they were known as Scots-Irish. The Irish Meeting House, our historic sanctuary at Deep Run, reflects that emigration.

Worshipping first in their log cabins, they established a congregation and built a log church to which Rev. William Tennent came to preach in 1725-1726. Tennent also supplied the Neshaminy Presbyterian Church, and both congregations were admitted to Philadelphia Presbytery in 1732. During the years leading up to the Revolution, the congregation grew steadily and a stone sanctuary was erected in 1770. The congregation reached its peak in 1776; 22 graves in our cemetery testify to their involvement in the fight for independence. Following the war, as unpaid soldiers returned home, the newly formed government’s offer of free land in western Pennsylvania attracted many, and the congregation dwindled.

Even as the Deep Run congregation declined, they were sharing a pastor with the growing Doylestown church (1815). The yoked congregations, known as the Deep Run-Doylestown Presbyterian Church, continued jointly for the next 135 years. William Allen had deeded 100 acres to Deep Run in 1729, stipulating the land be used solely for worship. Although the Irish Meeting House at Deep Run stood empty much of every year, they adhered to the terms of Allen’s deed and held joint worship services monthly, then quarterly, and thereafter annually. When the 1770 Irish Meeting House was deemed structurally unsound, the congregations worked together in 1841 to build a new stronger sanctuary on the same site. That building stands today and was restored in 1991; the lectern and the walnut sounding board are from the original building.

Four families of the Doylestown congregation, all living in Bedminster near the Irish Meeting House, requested the old sanctuary be opened again for regular worship.  Doylestown Session approved, and along with several Bedminster friends, they readied the building for worship. The task was daunting: any stone building left closed and unattended, for even a short period, develops mold, mice and more. The first worship service was held in June 1956 and beginning thereafter, the congregants continued to scrape, sand, and scrub, to grow in worship and to develop a thriving church. They immediately organized church school classes, opened a nursery school, purchased the one-room schoolhouse erected on church land, developed a budget and hired a student minister from Princeton Seminary. They built a manse, an educational building in 1966, a new and larger sanctuary in 1980, and in 2002 added an extension with additional classrooms and a larger fellowship hall. The buildings on our ten-acre campus of today echo the architectural style of the original Irish Meeting House.

Our world and community mission continues apace, as does Bible study for children and adults and music for all. We cherish our rural setting and the spirit that led our forebears to establish a congregation here 292 years ago. In 2025, we look forward to celebrating our own 300th anniversary - moving forward in faith and “looking to Jesus, the pioneer and perfecter of our faith” (Heb. 12:2).