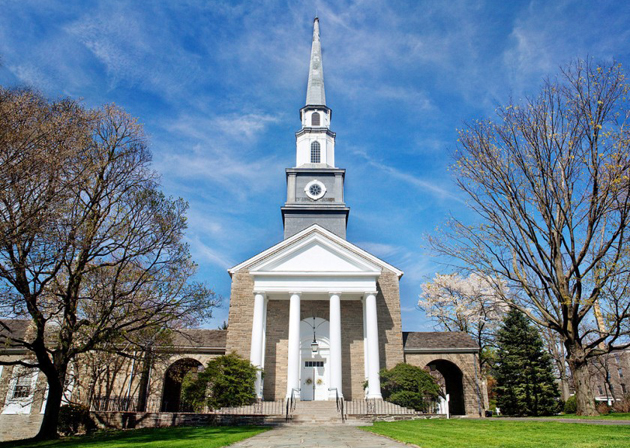 When the Rev. Roger Owen moved to Chestnut Hill in 1850, he saw a need for ministry and gathered a small group of interested people for prayer and worship. Two years later, on April 21, 1852, the Second Presbytery organized this group as the Presbyterian Church of Chestnut Hill and erected a building at the corner of Rex and Main Streets (now Germantown Avenue) in 1853 which Owen served for 34 years.

The church relocated to 8855 Germantown Avenue, next to the Chestnut Hill Hospital, in 1949. With a large new building plus a parking lot, membership rose to 1,245 in 1960, with more than 500 pupils in the Sunday school. The church was still among the stronger Presbyterian congregations in the city in 1990, with a membership of 895, and a Sunday school enrollment of 223.

By the second half of the 1990’s, worship attendance was continuing to dwindle, young families were scarce and the youth invisible. The physical plant had been neglected and the organ was beyond redemption. Twenty years and four capital campaigns later, the building has been transformed into a center of activity for the surrounding community. Children, youth, families, singles and seniors fill the building day and night. The membership is stable, worship attendance has doubled, baptisms abound. The leadership includes the next generation and newer members. In December of 2005 the church received a gift of $2 million to endow a full-time minister for senior adult ministry. In 2009 PCCH renovated 3000 square feet of the ground floor for a next generation center where adults over 55 in the greater Chestnut Hill community to gather and grow.

The church’s first full-time choirmaster/organist, called in 1996, transformed the choir and led the church to build and install a Mander organ from England. At the time of the music festival each year, fellowship hall is transformed into an art gallery, reclaiming the role of the church as patron of the arts. The church has become the performance venue for many choral and instrumental groups and is the home of The Crossing, a 24 voice professional choir that specialized in 21st century choral music, and the Pennsylvania Girls’ Choir, a racially and economically diverse choir of 160 voices drawn from the metropolitan area.

The church’s outreach ministry has also grown, involving members in a multitude of “hands-on” projects including Habitat for Humanity, Face to Face in Germantown, and annual youth mission trips. PCCH was a founding church with First Presbyterian in Germantown of the Germantown Avenue Crisis Ministry and was also one of the founding congregations for Broad Street Ministry in center city. A chapter of Heeding God’s Call to End Gun Violence was begun by members of this church and the church continues its decades-long commitment to Philadelphia Interfaith Hospitality Network. Currently PCCH is also part of a coalition of churches sponsoring a Syrian student and hopes to expand its ministry to refugees in the near future.

The Presbyterian Church of Chestnut Hill seeks, with God’s grace, to be “an inclusive community of faith committed to excellence in worship, music and the arts, education and outreach.”