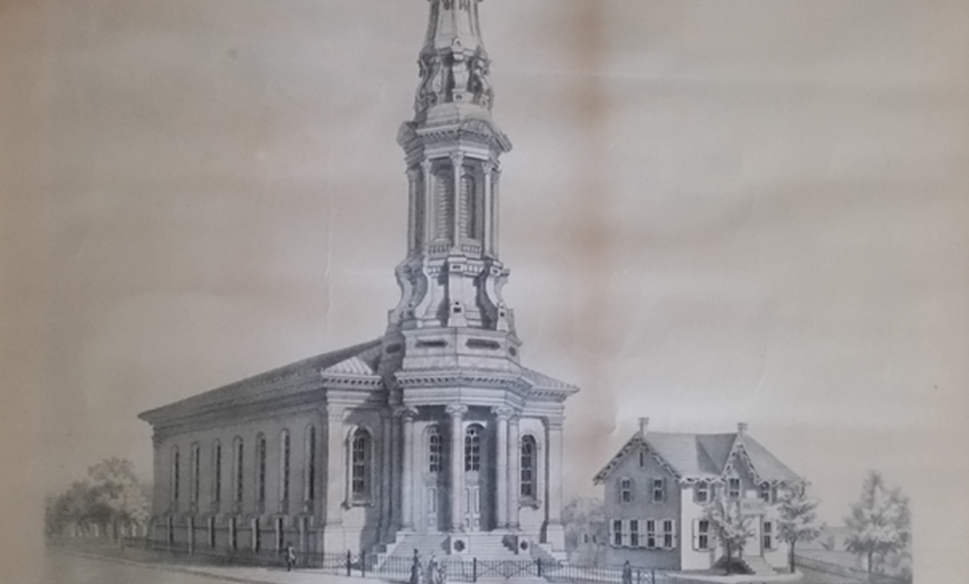 By 1814 a congregation had developed. In 1815, with the help of the Holy Spirit and Elder Hamill, this group built the Norristown Presbyterian Meeting House on Airy St., to spread the Gospel to the fledgling town. In 1818 they started the First Sunday School in Norristown.

The revivals led by Rev. Samuel Gould led to a growth spurt with literally hundreds of new members. The church building had become too small. In 1839 a new addition was put on. In 1853 a manse was built, and it was soon found that the pinning was rotting under the addition. The old building was sold and dismantled; a facsimile of the building can still be seen on Main Street. The present sanctuary was finished in 1855, with its landmark steeple on the skyline. After the Civil War the church began to prosper and in 1870 the church sent their very own member to the mission field in India. The church’s focus was now one of world missions, sending and supporting missionaries.

At the turn of the century First Pres was a leader in the community and its education. A new Sunday School wing had to be added in 1913.  Two Norristown schools were named after great educators – both were Elders and Christian educators of First Pres. They are A.D. Eisenhower Middle school, which used to be the original High School, and Gotwals Elementary School, located just a few blocks away from the church.

With the prosperity of Norristown, the church continued to grow. After WWII, it found the need once again for more space. In 1958 the old manse was torn down and the 1913 addition was replaced with a new Christian Education wing. But in the seventies, with Norristown’s decline and changing demographics, the church also felt the pinch.  Even with the dip in attendance and resources, the church is now more multi-ethnic than it has ever been and in 2013 received back into its facilities the congregation of Central Presbyterian Church of Norristown (which had split off from First in 1855).  Central is now a Spanish-speaking congregation in our Presbytery and meets in First’s fellowship hall for their worship services.

Today as the historic church and landmark in Norristown prepares to celebrate its 200th anniversary, it continues to proclaim the Lord Jesus Christ crucified and resurrected, and seeks to reach an ever-changing neighborhood with that Good News.